Jeep is recalling 42,887 Wrangler and Gladiator models equipped with the six-speed manual transmission. The problem? The clutch pressure plate can overheat and fail.

The pressure plate exerts pressure on the clutch disc; it’s bolted to the flywheel, which is attached to the rear end of the crankshaft. This crucial part of the mechanism transfers power from the engine to the transmission and ultimately to the drive wheels. Without it, power ceases to flow.

In the vehicles affected by the recall campaign, the clutch pressure plate could overheat and break, which could cause the clutch disc to rupture and, in rare cases, start a fire. Documents sent by Jeep to the National Highway Traffic Safety Administration (NHTSA) indicate that the company is aware of one accident, but that no injuries are known to be connected to the issue.

A total of 36,692 Wrangler units built between August 23, 2017 and January 22, 2021 are included in the voluntary recall, which includes all fourth-generation models equipped with the manual transmission. The campaign also includes 6,195 units of the Gladiator manufactured between December 21, 2018 and January 22, 2021. Both are equipped with the same pressure plate. 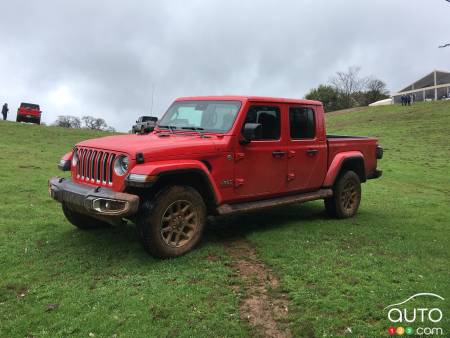 Jeep warns that drivers could smell a burnt clutch smell before the pressure plate fails. Notably, Jeep mentions that the affected parts actually work exactly as they were designed. In fact, it's a software problem that's causing the failure.

Owners of affected vehicles will be advised to visit their dealer, where a technician will “add software to reduce engine torque capability when the clutch assembly temperatures rise to a level that may damage the inner pressure plate”. Jeep will begin notifying owners on March 19, 2021.

We contacted Jeep Canada for clarification regarding models here, and received confirmation that 4,314 models in Canada fall under the recall.

Kia Is Recalling 380,000 Sportage and Cadenza Models Over...

Kia is recalling some 380,000 vehicles due to a fire hazard centred in the engine compartment. This is one of several fire risk campaigns for the Hyundai/Kia...