The Kia Forte was last renewed for the 2019 model-year. Which means it’s currently in its third year in the same form on the market, making it due for a mid-cycle revision next years. And that could be the occasion for Kia to change its name.

Indeed, the K3 has just been unveiled in South Korea with styling that is very similar to that of the larger K5 that debuted here a few months ago as a replacement for the Optima. Kia is clearly on a mission to harmonize its nameplates across all markets. In addition to the K5, the Sedona minivan is losing its current name for the next model-year, becoming the Carnival, as the model is known elsewhere in the world.

There are rumours floating about that Kia has already filed a registration application for the K3 name in the U.S., but the company declined to confirm that when asked about it by Car and Driver magazine. 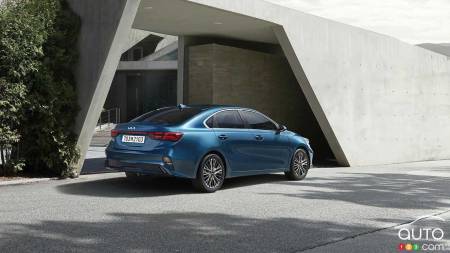 Whatever’s its name ends up being, the updated version arriving for next year will benefit from new headlights, slightly different lights and a new design for the wheels. The new Kia logo will also be clearly visible. On board, the car appears to have a larger multimedia system screen, as well as a digital display gauge cluster.

Mechanically, nothing should change much, as we're talking mostly about a cosmetic, not structural, update for the model. We can therefore anticipate the return of the 2.0L 4-cylinder engine and, hopefully, the 6-speed manual transmission. The GT model should still be powered by its 1.6L turbo 4-cylinder engine.

A Fortified 2022 Kia Forte for its Mid-Cycle Year

Kia is making several adjustments to its Forte model for 2022. There’s no one extraordinary change for the new year, but the car gets what it needs to stay i...

Volkswagen Canada’s offer will not include the Arteon sedan in 2022 or thereafter. A spokesperson confirmed the model will not be back. There are also new re...