The 2018 Canadian International AutoShow in Toronto is hosting some serious star power this week, with the Canadian debuts of the world's fastest production car and SUV!

Koenigsegg head Christian von Koenigsegg was on site this morning to present the exceptional Agera RS, which beat the official speed record for a production car, record held by the Bugatti Veyron, by attaining a speed of 284 mph (458 km/h) in the Nevada desert last fall (check out the video here). 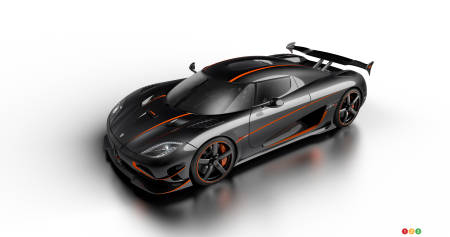 Lighter than the previous Agera S and R models at just under 1,300 kg, the Koenigsegg Agera RS is powered by a 5.0L twin-turbo V8 that generates 1,160 hp at 7,800 RPM. Torque, meanwhile, reaches an astronomical peak of 944 lb-ft at 4,100 RPM. The RS’ chassis is made of carbon fibre and its rear spoiler adjusts automatically to current speed to optimize downforce. Other central components are a 7-speed sequential transmission, 19-inch front and 20-inch rear wheels on which sit Michelin Pilot Sport Cup2 tires and immense 397-mm and 380-mm brake discs.

Those well-heeled show visitors who might make a snap buying decision on seeing this magnificent supercar will be out of luck, however: the 25 units that will be made available were snapped up long ago.

Meanwhile, three days prior to the official opening of the 2018 Toronto show, Lamborghini presented the Canadian premiere of its all-new SUV, the Urus, at the Design Exchange museum. From there the vehicle made its way to the auto show’s Auto Exotica section, to be displayed there until the show wraps up on February 25th.

Powered by a front-mounted 4.0L twin-turbo V8 – the first turbo engine ever to make its way into a Lamborghini – the Urus has an output of 650 hp at 6,000 RPM and 627 lb-ft of torque at 2,250 RPM. Able to accelerate from 0-100 km/h in 3.6 seconds, attain 200 km/h in 12.8 seconds and hit a maximum speed of 305 km/h, it is even faster and more explosive than the 707-hp Jeep Grand Cherokee Trackhawk, a much heavier vehicle. Its carbon-ceramic brakes can bring it from 100 km/h to a stop in only 33.7 metres. Air suspension and a four-wheel directional system are also incorporated. 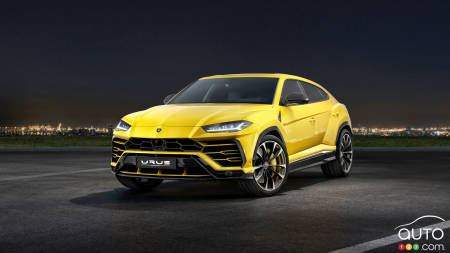 The designers of the Urus took inspiration from the Aventador and Huracán coupes, but also took a look back at the 1980s-era LM0002 utility model (yes, Lamborghini did previously make an SUV, although that early pioneer was significantly different, to say the least). A strong focus was placed on reducing weight and maximizing aerodynamics. The Urus rides on 21-inch wheels with an option to increase that to 23-inch wheels, as is the case with the model on display in Toronto.

Inside, the interior can ably accommodate five occupants, lest you thought practicality would part of the game plan with this new Lamborghini. Not only that, the trunk has a 616-litre cargo capacity; that can go to 1,596 litres with the rear seats folded down.

What’s the price, you ask, possibly fearing the answer? Starting price will be in the neighborhood of $235,000. If that hasn’t scared you off you can order yours as of now; delivery will start this coming spring. Here are more details as well as photos and videos of the new 2019 Lamborghini Urus.

A Swedish 1,160-hp supercar has just beaten the speed record for production cars previously held by the Bugatti Veyron. See what crazy top speed the Koenigse...

Toronto 2018: The Show in Pictures

If you haven’t had the chance to attend this year’s Canadian International AutoShow in Toronto, here’s a photo gallery for you that explores the many differe...