The all-new 2018 Lamborghini Urus ultra-high-performance SUV will get its official launch on December 4 in Italy. And while many see the new model as a first for the maker of exotic sports cars, more than a quarter-century ago the company’s LM002 was one of the pioneers in the fledgling luxury SUV segment.

If it reminds you somewhat of the original Hummer, that’s because both were developed initially for off-road military use. A project originally begun in the late 1970s was resuscitated in 1981 with the creation of LM 001, propelled by a rear-mounted engine. Lamborghini followed that up with a modified LMA (engine placed in front), and then by the LM002 production model, which saw the official light of day at Brussels’ auto show in 1986.

The LM002’s aluminum and fibreglass body housed a 5.2L V12 engine generating 450 hp via an all-wheel drive system and three self-locking differentials. The SUV could cruise at a top speed of over 200 km/h.

A total of 300 units were manufactured between 1986 and 1992. The black model shown here (chassis number 12231) was entirely restored by Lamborghini and is currently displayed at the company’s museum.

As for the new 2018 Lamborghini Urus, the company is promising exceptional output and torque from the engine as well as a highly distinctive design that will make of the vehicle a sure head-turner on the road. It will be able as well to handle various off-road terrains, including everything from gravel roads to sand dunes to snow-covered trails.

We look forward with high anticipation to the full reveal on December 4 – don’t miss it!

In Canada-specific Lamborghini news, the automaker has just opened a new dealership in Toronto to introduce its new, modernized image in this country, its fifth-largest market in the world. 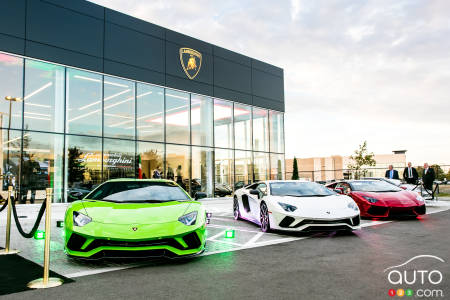 The new Lamborghini Urus, the so-called first Super Sport Utility Vehicle in the world, and creates a new niche in the luxury segment. We have all the detail...

Lamborghini’s bet seems to have paid off: the automaker has just announced it has now built 10,000 units of its new Urus SUV. While some second-guessed the ...