Bologna, Italy - Located in the heart of the "Motor Valley" found in Emilia-Romagna, in northern Italy, the Lamborghini plant has been producing sports cars since 1963. The industrialist Ferruccio Lamborghini had been producing, among other things, agricultural tractors since the end of World War II. Passionate about sports cars (Jaguar, Mercedes, etc.), he bought many exotic vehicles over the years, eventually treating himself to a Ferrari 250 GTE.

See also: The Car Museums of Italy: The Pagani Museum

See also : The Car Museums of Italy: The Ferrari Museums

But his vehicle quickly encountered clutch problems, which obviously displeased Ferruccio. On opening up his vehicle, he realized he could repair his car… with the same parts used on his tractors. Lamborghini requested an interview with Enzo Ferrari to express his dissatisfaction. It is said the two men, each owners of a strong character, quarrelled quite heatedly.

Several versions of this animated discussion exist. But the upshot was that Ferrari told Lamborghini he was just a farmer, unable to drive Ferraris properly, and that he should consider himself lucky to have the chance to drive the best cars in the world.

Whatever the exact words spoken, the result of the dispute was that Enzo Ferrari would have to reckon with a new rival just a few kilometres from his own factory.

Indeed, Ferruccio energetically launched itself into car manufacturing and marketed its first sports car in 1964. It was the 350 GT with a 280-hp V12 engine, which was very powerful at the time.

The Sant'Agata Museum and Factory 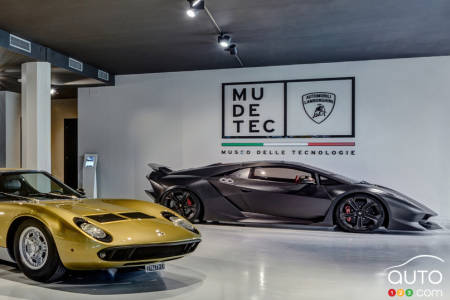 Located between Modena and Bologna, the small town of Sant'Agata is home to Lamborghini’s factory and official museum, now called Mudetec. The museum, built on two levels, displays the brand's emblematic models on the ground floor, along with recent vehicles from the early 2000s to the present day. 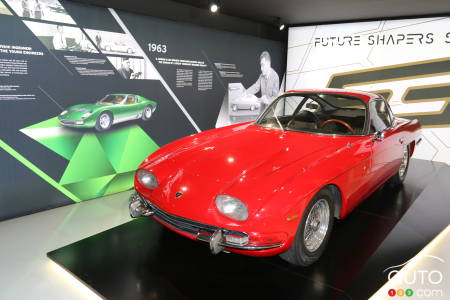 Among the rarest pieces found in the museum is the first car ever to leave the automaker’s factory, a red 350 GT in a remarkable state of preservation. Just behind it is the mythical Countach, a 1974 model the lines of which are much purer and more streamlined than those of the later, more muscular models produced at the end of the 1980s. Small and low, the Countach looks tiny next to the huge SUV parked right behind it, the Lamborghini LM002. It's a four-wheel-drive monster with a 5.2L V12 borrowed from the Countach LP5000. The 1990s are also in the spotlight with the last Lamborghini model produced before the Volkswagen-Audi era: the Diablo. A road model and a racing model sit side-by-side, just in front of an Espada coupe. Photo: Auto123.com
The Diablo at the Museo Lamborghini in Sant'Agata. A highlight of the show is the famed Miura, by general agreement one of the most beautiful cars ever produced in automotive history. Upstairs, you find the current range of models (Urus, Aventador and Huracàn) but also prototypes and models produced in very small quantities. Among the most spectacular cars, there’s the Veneno, a real cracker of a car only 12 copies of which were produced, and the Reventon, the design of which was inspired by the F22 fighter plane. Lamborghini also has on show a Centennario, 40 units of which were produced on the occasion of the centenary of Ferruccio Lamborghini's birth. Photo: Auto123.com
The back end of the Lamborghini Centennario (2016).

Finally, on a more original note, the Italian manufacturer has on display the Concept S prototype, a roofless model with a tiny windshield split in two; it was presented in 2005. Lamborghini also offers a tour of the plant that currently produces the Huracàn and Aventador. Though it costs an arm and a leg, just about (75 euros, or about $110 CAD!), the visit is worthwhile nonetheless. Our very knowledgeable guide answered all our questions and gave a ton of explanations to the visitors. As we passed by the assembly lines, the expertise of the workers who assemble the V12s by hand and the meticulousness of the cabin specialists who cut, sew and glue the leather kind of leave you speechless.

Next page, the Ferruccio Lamborghini Museum.

The New Lamborghini Countach: Here it is!

Lamborghini just unveiled the new Countach at the Quail, one of the most prestigious events held as part of the Pebble Beach rally.The model is intended as a...

Another unique Lamborghini tour has ended. Participants enjoyed the experience of driving one of the brand’s latest jewels, the Lamborghini Centenario, as th...