The Toyota Group has stated that it intends to introduce 10 all-electric models by 2025. The first one of those is set to make its commercial debut in 2020, and the automaker has confirmed that the concept version of that EV is going to make its debut in mid-October at the Tokyo Motor Show.

And as anticipated, the product will come with a Lexus badge on it. In an interview with Autocar, Koji Sato, head engineer at Toyota’s luxury brand, confirmed that the company will present an electric prototype in Tokyo in the fall, saying “we feel that our future could resemble this design.”

Reports are that the prototype is a compact hatchback, with a large Lexus badge on the front. We can imagine a spiritual successor to the CT200h model.

In 2015, Lexus presented the LF-SA, a small-car design study that roughly matches the description of what Lexus will show in Tokyo. We could well see an evolution of that earlier concept.

As for the powertrain of the model, we’ll have to wait to learn more. Toyota is currently working on new technologies like solid state batteries, so anything’s possible.

What we won’t be seeing from Lexus in Tokyo is a PHEV prototype. The company recently announced its full commitment to moving straight to 100%-electric vehicles. 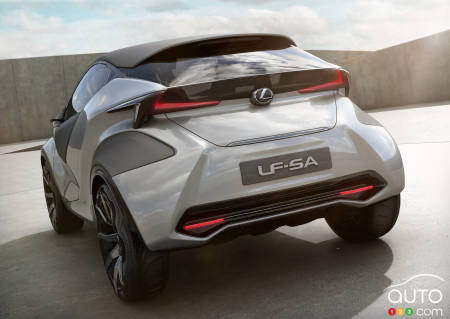