Before September 2015, the diesel engine was a popular thing in many corners of the globe. This was especially so in Europe, but also in certain areas of North America, where diesel die-hards swore by the technology. Certainly, its stingy fuel consumption gave the diesel engine some strong arguments.

Then the sky fell down, in the form of the VW diesel-engine scandal.

It’s been a rocky road for diesel since then, to say the least. And yet, its grip on certain pockets of the marketplace remains firm, notably regarding heavy machinery and trucks. In the case of car though, its popularity has melted like snow in May.

At Mazda, the company was promising a revolutionary approach to diesel technology at the turn of the current decade. Based on the new SKYACTIV technology, it was going to perform miracles. Yours truly even trekked to Vancouver in 2010 to try out a right-side-drive Mazda shipped in from Japan for the occasion. The engine was efficient, no doubt about that.

It’s now eight years later, though, and we’ve seen nothing from Mazda. It’s a bit like the Habs’ eternal search for a number-one centre: eternally discussed, never realized. 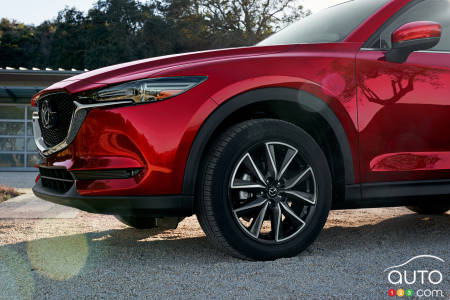 In the case of Mazda and diesel technology, skepticism is increasingly in order. The CX-5 was to get it last year, but we’re still waiting. A major factor is that environmental norms are forever getting stricter. Mazda says it is working furiously to conform to the new standards.

This week the company repeated its belief in diesel engines. In fact, it hopes that new emissions-measuring methods (Real Driving Emissions), which hew more closely to those used for gasoline engines, will be kinder on diesel motors. According to Jeff Guyton, president and CEO of Mazda's European division, if and when this happens, public opinion will change as well.

The company also stated that it believes the technology has a place in North America. Check out the website of Mazda’s U.S. division, and the diesel version of the CX-5 is still listed as an upcoming model.

Mazda is also working in partnership with two Japanese universities on a type of bio fuel made from seaweed. For the moment, the solution is not a cost-effective one.

“…if a fraction of the money (currently invested in electrification) goes to developing a bio fuel instead of electric propulsion, we can take a big step and actually have a positive impact on the environment.”

This is not a surprising statement from a company that offers no electric-powered vehicle. Although, Mazda is intending to produce its first such vehicle next year.

Two main takeways from Mazda’s position: First off, Mazda has devoted colossal sums on research and development of its diesel technology, and it has no intention of throwing that investment away. Second, if you take stock of the incredible variety in propulsion systems being developed left and right, it’s clear that the future will be dominated not by one single approach, but rather a mosaic of technologies.

We live in interesting times, as they say.

After promising for years that a diesel-powered Mazda powertrain was on the way, the automaker seems on the verge of keeping its word. A diesel-engine Mazda6...

Nobody’s perfect: this is the story of an automaker presenting an engine format years too late and removing the advantages that format offered in the first p...