Mazda announced a recall of some 44,000 CX-5 SUVs, including 6,983 vehicles in Canada, over a corrosion problem that could cause the LED daytime running lights to fail. Here’s the explanation provided by Transport Canada:

“On certain vehicles equipped with LED daytime running lights (DRLs), the wrong material was used for the gasket that seals the wiring connector. As a result, the gasket material could cause corrosion of the circuit board. This could cause one or both of the DRLs to flicker and/or fail. Safety Risk: Daytime running lights that do not work could make the vehicle less visible to others and increase the risk of a crash.”

According to Mazda, the defective gasket could release sulfur, which could cause corrosion of the circuit that controls the DRLs.

No accidents or injuries have been reported in connection with the problem. Mazda itself has not yet announced specific instructions regarding the recall, but Transport Canada is saying that Mazda Canada will be required to contact owners by mail and ask them to bring their vehicle to a dealership to have it inspected.

Technicians will if needed replace the sealing gasket and add rustproofing material to the inside of the lights. Dealerships will also replace the DRLs if they’re found to have been affected by the problem. 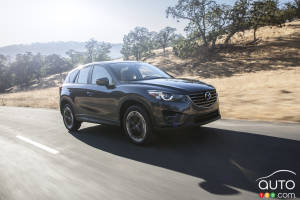 A potential fuel leak during a rear-end collision is forcing Mazda to stop the sale of 2014-2016 CX-5 crossovers indefinitely and recall all units.

After Formal Request from the NHTSA, Tesla Says It Is Rec...

After a formal request from NHTSA, Tesla says it will recall nearly 135,000 vehicles. The issue, related to a possible failure of the interior’s touchscreen,...