The Kona has barely set tire on Canadian roads, but already Hyundai is mulling the idea of producing a beefed-up N performance version. Hyundai uses the N designation for the performance variants it creates of its regular models.

During a recent interview with British magazine Auto Express, Albert Biermann, the new head of Hyundai’s N division, said that the company is not closing the door to producing a more powerful Kona. "I've told [the engineers] to build the car and we'll see what happens with getting it approved," he said.

Biermann specified that the prototype being worked on would be powered by the N variant of the i30, a beefier version of the model we know on this continent as the Hyundai Elantra GT. The Kona N would get 250 horses from this engine, which also serves the i30 N as well as the Veloster N.

For the moment, only the one front-wheel drive powertrain is under consideration.

To ensure the frame reflects the changes made underneath the hood, this hypothetical version of the Kona would get a number of new elements, likely a front spoiler, alloy wheels, red accents throughout and maybe even a rear wing mounted on the rear of the roof. A Kona N would sit lower to the ground, due mainly to major modifications to the suspension. For the latter, and for the brakes and the steering, Hyundai would look to the hardware of the i30 N.

While the official green light for the Kona N has not yet been given, the fact that the division’s new head feels free to discuss it makes it a safe bet to proceed to full development. As for whether it will cross the oceans and land on North American shores, that’s a whole other question. Though given the popularity of the new Kona here, it’s hard to see why Hyundai would decide to forego this market.

Check out our review of the 2018 Hyundai Kona, as well as pricing and details for Canada. 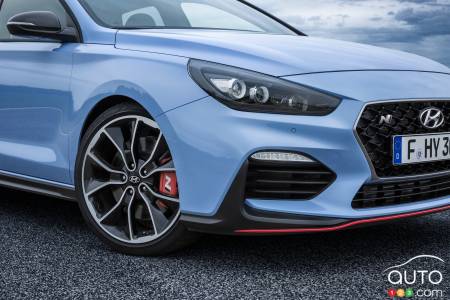 Hyundai and its Kona Iron Man

Looking to partner with the winner that is the Iron Man movie franchise, Hyundai is collaborating with Marvel to produce a special Iron Man edition of its Ko...

Volkswagen has unveiled the R version of its T-Roc SUV ahead of the concept’s Geneva debut. For the moment, the plan is to offer the performance variant only...

The 2019 Hyundai Kona enters its second year on the market in Canada as a top choice in its category. The attractive subcompact crossover is getting a bigger...