This week, New York State Governor Kathy Hochul signed into law a bill that sets a goal similar to that of California and several other states: All new passenger vehicles and light trucks sold in New York will have to be "zero-emission" models by 2035.

Recall that in New Jersey, the neighboring state, this is also being studied and actively planned. In Canada, the year 2035 has also been identified. All of it suggests that one by one, U.S. state legislatures will follow suit with that timeline.

It may take longer for some states, however. 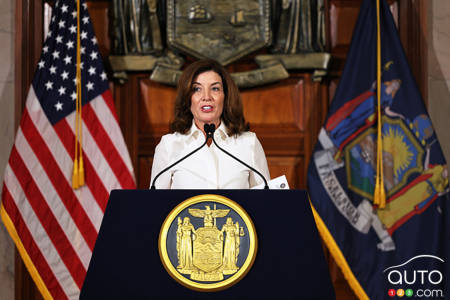 Here's what the Autoblog site reports:

The legislation
New York’s law calls for regulations requiring more zero-emission vehicles, with a goal of "100 percent of sales in the state by 2035," and a similar goal for medium- and heavy-duty vehicles by 2045 if possible.

The U.S. government has of course been vocal about promoting the sale of electric vehicle to help reduce fossil fuel consumption and help meet global goals to slow human-caused climate change.

Last month, President Joe Biden took a step toward his administration’s goal of reducing greenhouse gas emissions by issuing an executive order that calls for half of all new vehicles sold to be electric starting in 2030. This goal is supported by the largest U.S. automakers.

At the same time, the Biden administration has repeatedly refused to approve nationwide proposals to phase out the sale of all new gasoline-powered vehicles by 2035, despite pressure from some Democrats in Congress.

This past April, New York, California and 10 other states asked Joe Biden to set standards that would require all new passenger cars and light trucks to be emission-free by 2035.

In the Big Apple
New York City said this past Wednesday that meeting its climate change goals would require 400,000 of the city's two million vehicle owners to switch to electric by 2030. The city pledges to install a network of 10,000 curbside charging stations by 2030.

New York State also promised to introduce regulations requiring an increasing percentage of all new medium and large trucks sold in the state to be emissions-free starting in the 2025 model year.

The legislation signed Wednesday also aims to require all off-road vehicles to be zero-emission models by 2035.

New York State is targeting 2035 for a ban on the sale of new gasoline-powered vehicles. Quietly, a consensus seems to be building across North America on th...

Chrysler presents a newly dressed-up version of its Airflow EV concept, this time in Graphite garb. Auto123 has the details and a few images.