We’ve heard much lately about the coming shortage of battery packs for EVs, most notably in the form of a warning by Rivian boss R.J. Scaringe, who predicted that the lack of supply of batteries for electric vehicles will be far more severe than the current shortage of microchips bedeviling the industry.

That there will be an explosion in demand for EV batteries is obvious to everyone, of course, and the U.S. government has announced it is pouring hard cash into encouraging development of a domestic battery-production industry. President Joe Biden made the announcement this week that his administration is earmarking $3.16 billion (taken from the larger $1 trillion infrastructure plan previously announced) to be given out as grants to develop and build battery production facilities on American soil.

The Teslarati website quoted US Secretary of Energy Jennifer Granholm as saying that “Positioning the United States front and center in meeting the growing demand for advanced batteries is how we boost our competitiveness and electrify our transportation system.”

We also note that recent announcements of new investments in the automotive industry in Ontario and Quebec by General Motors, Stellantis and others include, in many cases, allocations to build battery-production plants. 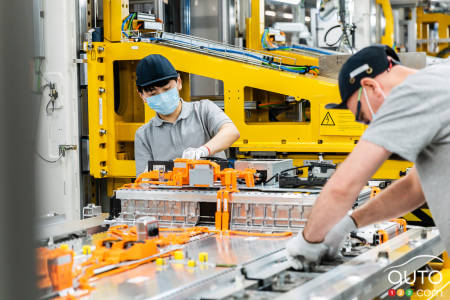 The announcement this week of course ties in with the U.S. administration’s stated plan to replace its governmental fleet of vehicles with EVs, and further to have 50 percent of all new vehicles sales in the country consist of electric models by 2030. A shortage of batteries, and of the components needed to make them, would severely hamper the attainment of the first but especially the second of those objectives.

It’s worth noting that currently, as reported by InsideEVs, the U.S. is adopting EVs at the third-fastest rate globally, behind China and Europe.