The Ford Ranger has only just reappeared on the market here, and already its maker is working on a new generation. This makes sense when you remember that the version Ford has reintroduced is actually not new, it being taken from the global-market Ranger first introduced elsewhere in 2011 and given a mid-cycle reboot in 2015.

And since we know Ford is developing a new generation already, naturally rumours are floating around in regards to its configuration. One of those comes courtesy of Wich Car website, which cites a source at Ford who confirmed that Ford is testing new mechanics to power its Ranger. Those include two 6-cylinder engines: a 3.0L diesel-powered V6 and a 2.7L gas-fed V6.

Could both of those powertrains make it to North America? We can say probably, at least in the case of the 2.7L engine, a unit already in service in the biggest F-150 truck. With its 325 hp and 400 lb-ft of torque, it would certainly provide the Ranger with some of what it’s currently missing. The current engine of the pickup is a 2.3L 4-cylinder that delivers 270 hp and 310 lb-ft of torque.

As for the diesel engine, its introduction in North America is uncertain. Among the Ranger’s rivals, only those under the General Motors banner offer such a mill, namely the Chevrolet Colorado and GMC Canyon.

Either way, Ford has understood what many have been saying, that the Ranger could really benefit from a second powertrain in the product offering. That small 4-cylinder is simply not enough for some potential buyers.

Chevrolet has just announced that it will be offering consumers two new turbo engine choices for its 2019 Silverado pickup, one of them a diesel, giving it t... 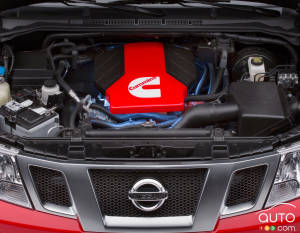 On Monday, Nissan tweeted a picture of its new Titan equipped with a 5.0L Cummins turbodiesel engine. It was accompanied by the hashtag #CUMMINSSOON (make su...