A long 60-day road trip came to an end in Tokyo yesterday for a Polish adventurer. Polar explorer Marek Kaminski had set out from his home country behind the wheel of a Nissan LEAF, with Tokyo the end destination. The aim was to demonstrate the feasibility of driving long distances in an EV.

The trek from the town of Zakopane to Tokyo took him through Lithuania, Belarus, Russia, Mongolia, China and South Korea before entering Japan. 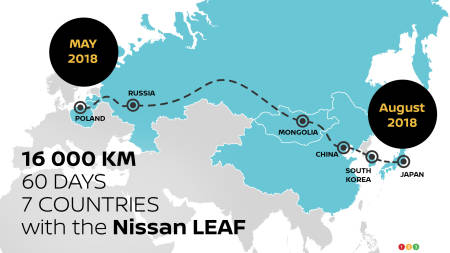 A large portion of the trip took Kaminski away from large urban centres and their concentrations of recharging centres – a main goal of the exercise. The trip took some 90 days in all, including 60 days of actual driving.

"For me, this journey is not just about reaching my destination – it is also about making a simple, brilliant change to be more sustainable…. The LEAF gave me the opportunity to stick to my pledge and travel without a trace, so I hope that this is a step forward on the journey towards sustainable mobility."

Oh, did we mention he intends to hit the road again and do the trip in the other direction? 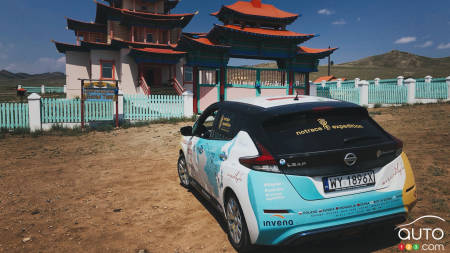 Remarkable as the achievement is, it’s worth placing it in context.
Namely, Marek Kaminski’s trip would have been completed more quickly had he been at the wheel of a Chevrolet Bolt, or a Tesla for that matter.

Though it is the world’s best-selling electric car, the LEAF is not the one with the longest range per battery charge.

Marek Kaminski’s big accomplishment is to have completed the journey on electric power, period, not because it was specifically a Nissan LEAF he was driving.

And there’s the nuance.

We also can easily imagine people in 30 or 40 years looking back on a trip such as this one with the same distant admiration and wonder as we feel today when pondering early voyages across the American continent in the early 20th century, undertaken in rudimentary cars on an almost non-existent road network, with far fewer places to refuel than today.

Kind of like our current electric charging station network.

Here's a video of this extraordinary voyage. 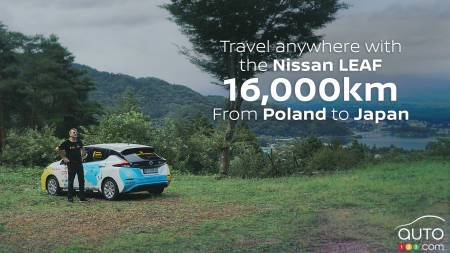 This week the City of Montreal took possession of its first new 2018 Nissan LEAF, as part of an order of 100 LEAFs that will join its municipal fleet in the ...