This week, Nissan is showing further proof that its electric mobility plans are well underway. Even as the automaker prepares to introduce the Ariya SUV, we get a glimpse of still another electric SUV to come. The sleek new crossover previewed in a profile image will be built on the same platform as the 2022 Ariya.

That platform is the CMF-EV out of the Renault-Nissan-Mitsubishi Alliance toolbox, and it offers a two-motor system that will provide up to 389 hp to the Ariya. Its range is close to 500 km thanks to a 90 kWh battery. The Ariya, recall, will also offer a 65 kWh battery and a lower capacity, around 350 km.

No technical details have been revealed about the new model, but we can assume that it will benefit from the same basic mechanical components. The sketch of the vehicle ‘s profile shows a format roughly similar to that of the Ariya, which we know is similar in size to the Ford Mustang Mach-E and Volkswagen ID.4 electric SUVs that have already launched. 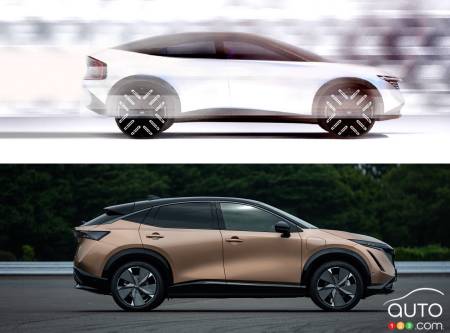 Nissan didn't say where or when the new electric crossover would be ready for delivery to customers, but it did describe the model as a global product, which suggests we'll see it in North America.

One of the planned production sites for the model is Nissan's Sunderland, U.K. plant, where the LEAF, Juke and Qashqai are currently built. Nissan said the site will become a hub for electric vehicle production, and there are also plans to build a new battery plant nearby.

That plant will be built by lithium-ion unit specialist Envision AESC, and it will join an existing facility at the site that Envision AESC built in 2012 to supply batteries for the first-generation LEAF (also built in Sunderland).

Envision AESC was founded by Nissan as AESC in 2007, in partnership with two other Japanese companies, NEC and Tokin. However, Nissan sold its majority stake to China's Envision Group in 2018. The company made that divestiture at a time when it launched the second-generation LEAF, a model powered by batteries from outside suppliers.