This is not a sequel to the recent Hakka 9 but a brand-new tire with several revised technologies. Let's specify right away that the Hakka 10 will be available in studded and studless versions. However, Nokian says the studded version will offer more protection.

Initially, Nokian will offer about ten variants of the Hakkapeliitta 10 with a total of 140 products. This new winter tire will be offered for 14- to 22-inch rims with a T speed rating (190 km/h). Most of the products that will be available in the fall of 2021 will have a maximum load capacity of XL.

According to studies conducted by Nokian, motorists are clearly looking for better grip on snow and ice from their winter tires. To meet those wishes, Nokian has come up with a technology called Double Stud. 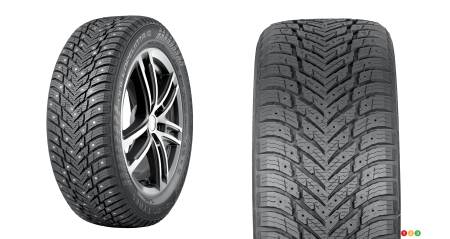 Initially, the new star-shaped studs were repositioned 180 degrees on the tire shoulders for more lateral grip, especially on ice. Nokian then increased the number of studs per tire and their placement is determined by the size of the tire. These studs are now better retained in the tread. As a result, Nokian noted an 8-percent improvement in grip during acceleration.

As well, the Hakka 10 gets a redesigned directional tread pattern with three-dimensional nesting sipes. It also gets a brand-new rubber that includes several bio-based materials including pine resin and canola oil, which make up 30 percent of the formula. The oils used in the tread are 50-percent organic. Finally, the new Hakka 10 has less rolling resistance for better fuel economy.

Another important detail concerning the Hakka 10 is that Nokian has paid particular attention to models with studs to make them significantly quieter. 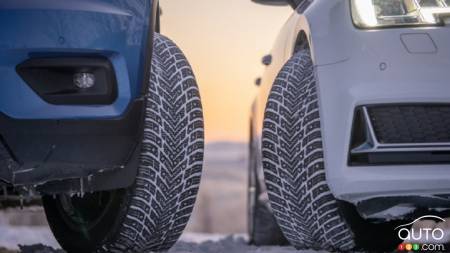 Photo: Nokian
The Hakkapeliitta 10 for SUVs, and for cars

As for the Hakka 10 SUV tire, it's designed for SUVs and crossovers and has the same characteristics, but it also uses Aramid Sidewall fiber technology added to the sidewalls to protect them from road imperfections.

Finally, the Hakkapeliitta 10 EV is a new addition to the Nokian range. This winter tire has been designed for hybrid or all-electric cars and incorporates SilentDrive technology, which includes a revised structure and more rubber in the tread. Their quiet running should reduce transmission of road sounds into the passenger compartment, which in the case of EVs is already quieter due to the absence of mechanical movement.

Nokian also used its Winter Safety Indicator technology in the tread. This consists of numbers that indicate the thickness of the tread in millimetres as it wears down. There's even a snowflake symbol that remains visible until the tire reaches the end of its useful life. When it's no longer visible, it means the tire needs to be changed.

Once again, it should be noted that the Nokian Hakkapeliitta 10 will be available at the brand's retailers this fall. If you're planning to buy new winter tires for next season, visit the dealer as soon as possible!

The Best Winter Tires for SUVs, Pickups in Canada for 202...

Snow, ice, cold, slush. Here's another challenge that we're facing in a frankly extraordinary 2020. Except this one is fully predictable, as winter shows its...

Nokian Tyres today launched two new tires designed for SUV owners who like to venture off the beaten path. The Outpost AT and Outpost APT offer more ruggedne...