The Ford Escape is a big deal for Ford. Not only is the model a perennial strong seller for the Blue Oval brand, it's also one of its few products currently able to impose itself in its segment - the other obvious one being the F-150 pickup truck. And this isn’t any old segment; the compact SUV category is the most popular among consumers in North America, and thus the most hotly contested among carmakers.

The previous version of the Escape, introduced in 2013, had a rough go of it initially in terms of reliability. Nevertheless, it stayed in the fight to lead the pack in the segment. Last fall, Ford went back to the drawing board and came up with a transformed new generation of the compact SUV.

The new edition comes in three versions: regular, hybrid and, soon, plug-in hybrid. Recently, we found ourselves behind the wheel of the second one. Here are six things that caught our attention. 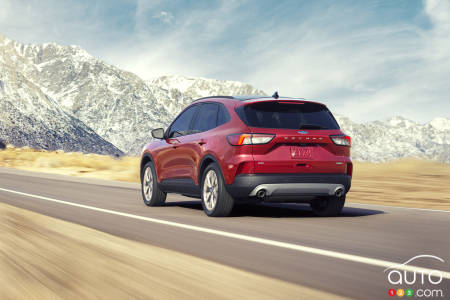 When consumers consider a hybrid model, fuel economy is obviously a principal concern. During our recent drive that was one element we naturally monitored closely. Especially since, after testing the hybrid version of the Toyota RAV4 last year, we had something to compare it to.

We came away with an average of 5..8L/100 km with the Escape. Frankly, for a vehicle of that size, that's an excellent result. The RAV4 Hybrid, meanwhile, gave us similar figures – for example, an overall total of 5.7L/100 km. For city driving, the Escape actually slightly outperformed the popular Toyota; the former came in at 4.9L/100 km, the latter at 5.1L.

If you’re going to be driving your urban SUV around mainly in an urban setting, both models will help you save substantially at the pump.

Read our First Drive Review of the 2020 Ford Escape Hybrid.

2020 Ford Escape Hybrid Review: Back in the Lead Peloton,...

The Ford Escape was once the number-one best-selling compact SUV in Canada. But the model has been eclipsed by the likes of the Honda CR-V and Toyota RAV4. N...