A few weeks ago, we participated in the launch of the Ram 1500 TRX, a completely unhinged version of the truckmaker’s 1500 pickup truck powered by a 702-hp engine. This week, production officially began at the company's Sterling Heights plant in Michigan.

Fun fact: The first 702 models to come off the line will be "Launch Edition" versions, and naturally we can expect those to quickly become highly sought-after collector's items. Before you get too excited about getting one, know that the order book for them is already full. Although, there is still hope: the first model will be auctioned off.

That bit of news could make quite a few ears perk up, because despite a price of over $90,000, the TRX Launch Edition trucks sold out in just three hours.

FCA says more information regarding the first TRX that will be offered at auction is coming later on, including when the auction is to take place. Proceeds from the sale will be going to charity.

One thing we’re stocking up on popcorn for is the coming 2021 battle between the TRX and the next-generation Ford F-150 Raptor, also debuting next year. The speculation is that that model will be powered by a supercharged 5.2-litre V8 engine delivering, you guessed it, more than 700 hp.

The Ram 1500 TRX is powered by a 6.2L Hellcat V8, also supercharged, which allows the truck to speed from a stop to 100 km/h in under five seconds. The truck, we were able to confirm, also delivers impressive off-road capabilities as an added bonus. The model was just this week nominated as a finalist for the prestigious NACTOY (North American Car and Truck Of The Year) Truck of the Year award.

We'll get back to you with the details when the event takes place. 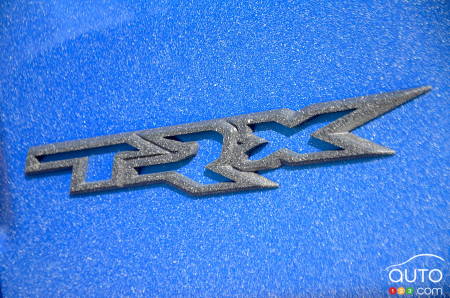 Auto123 tested the new, craziest version of Ram's pickup truck. The TRX is powered by a 702-hp V8 and is equipped with everything you need for uncompromising...

Ram has made public the fuel consumption figures for the 1500 TRX truck and they’re as hair-raising as you might have guessed. Nobody expected miracles from ...