Drivers can be distracted by all sorts of things, but it’s hard to think of a more dangerous distraction than watching TV Automotive columnist: Daniel Rufiange , Updated: 2021-12-13

Ever since screens were installed inside vehicles, the question of the distraction they can cause has been front and centre in discussions about on-road safety. But by and large, with simple multimedia screens, drivers have adjusted.

However, with screens continuing to grow in size and complexity, and with the addition of features like the ability to stream shows right on the screen, it was only a matter of time before problems arose.

And there have already been examples. In early 2021, the National Highway Traffic Safety Administration (NHTSA) announced it was investigating reports that Tesla's multimedia system allowed drivers to play video games, including Solitaire, while they were supposed to be driving.

Now we have the case of Mercedes-Benz and its flagship luxury sedan. The automaker is being forced to recall some units of its newest EQS and S-Class sedans due to a software error that allows drivers to watch TV… while driving. The recalled cars are equipped with the MBUX multimedia system, which is displayed on a large touchscreen in the dashboard. 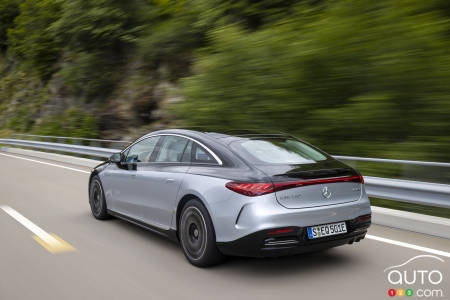 Because the models are new and not in circulation in large numbers, the recall campaign affects only 227 units of the EQS and S-Class, built between December 8, 2020 and October 13, 2021. But while the number of affected vehicles is small, it's important to highlight this kind of issue because the safety implications are significant. Most people wouldn't dare drive and watch TV at the same time, but the fact that it's possible is troubling.

Mercedes-Benz notes that the affected models are equipped with software that is incorrectly configured, allowing front-seat occupants to access digital content like streaming TV while the vehicle is in motion. Note that this can only happen if the driver has an active account with the Mercedes Me app that’s connected to the multimedia system.

The automaker says it’s not aware of any accidents or injuries caused by the problem and that it has launched the recall campaign voluntarily. The Stuttgart-based company has already updated the software on the server that connects potentially affected cars in the United States. This means that the problem has been disabled and owners of EQS and S-Class models will not need to visit a dealer for a software update.

Volvo is issuing a small-scale recall - just 74 vehicles are targeted - but the problem to be fixed could lead to very unfortunate consequences. An extra scr...

Mercedes-Benz Will Gradually Drop the EQ Letters for its EVs

Mercedes-Benz will gradually drop the EQ letters it uses to designate its EVs. According to a German media report, once the electric transition is complete, ...

Mercedes-Benz is having to recall more than 320,000 SUVs due to a problem that can cause sudden engine stalling. The cause is a possible fuel pump failure th...