Next month Auto123 will be heading for Utah to test-drive the new 2020 Nissan Titan, the beneficiary of a mid-cycle refresh for the next model-year. Now the Japanese automaker has revealed details for the XD heavy-duty version of the pickup. This truck plays a hybrid role in the Nissan lineup, as its capacities place it midway between a traditional half-ton and a three-quarter-ton truck.

Without much surprise, the first notable change involves the disappearance of the diesel variant. Cummins, which supplied the engine for the diesel-powered XD variant, has stopped making that engine. The only powertrain left in the catalogue is a 5.6L gasoline-powered V8. For the new year it has gotten improvements that will see its output boosted to 400 hp and 413 lb-ft of torque (for gains of 10 and 19, respectively).

A new 9-speed automatic transmission will also be part of the powertrain, replacing the outgoing model’s 7-speed unit that has served the model since it debuted.

Nissan has not announced the load and towing capacities for the 2020 version of the Titan XD truck.

As for the choice of cabin, there too the choices are fewer for the new year. Fewer as in one, in fact, as Nissan is only offering the crew Cab configuration with 6.5-ft bed.

Every version will be delivered with all-wheel drive. It’s clear that the moves are designed to reduce costs for the company, especially as the model is not a big seller in North America. On the one hand Nissan wants to reduce the offer to the most popular variants, but on the other the removal of a diesel engine and other cabin/bed choices, increasing the model’s sales will be that much more challenging.

Esthetically, the changes being brought to this XD version are in line with those we’ve seen for the regular Titan. Generally, the idea is to make the design more aggressive, through all the trim levels.

The biggest changes have to do with the tech offered inside. The top versions of the 2020 Titan XD get a new 9-inch multimedia screen, which includes Apple CarPlay and Android Auto integration. A new panoramic sunroof is also available, as is a Fender premium audio system; buyers can also option in LED headlights and anti-fog lights. These are not the types of elements that make of the Titan XD a luxury truck like found in the upper reaches of the Big Three’s product lines, but it doesn’t close the gap at least a little. 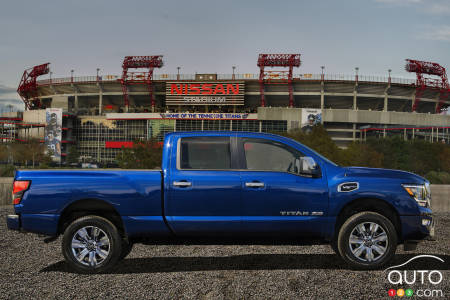 Canadian pricing for the new 2020 Nissan Titan XD will be announced closer to the model’s launch date. 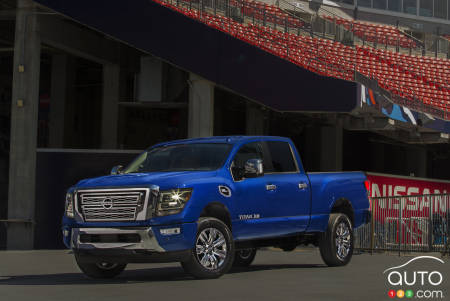