Fledgling automaker Rivian recently rolled its first electric vehicle off the assembly line at its plant in Normal, Illinois. The R1T is the first all-electric pickup to hit the market, beating out the trucks on the way from Tesla and Ford, among others.

And of course, there’s another Rivian model, the R1S SUV, coming in the next few months. Beyond that, the company has more in the pipeline – recall that the automaker has registered several new names for potential use down the road.

But virtually all of Rivian’s big plans depend on one single name: Amazon. Its partnership with the online sales giant ensures financial stability going forward, so the success of that partnership is crucial.

Recall that Amazon is a substantial investor in Rivian (as is Ford). And the retail behemoth has an order with the startup EV maker for 100,000 all-electric delivery vans. According to Bloomberg, Rivian’s real focus is not so much production and sales of the R1T or R1S, or even its future outdoor charging network, but fulfilling its contract with Amazon.

But things get even more interesting from there, because if that contract goes well, Amazon may want even more vans from Rivian.

One of those internal sources familiar with the contract told Bloomberg that “You can safely assume 100,000 vans is not really the objective. If Amazon really wants to change over their fleet - because how else are they going to become carbon neutral - then you can imagine the size of the order and how big it will be."

But Rivian can’t take anything for granted, because the agreement stipulates that Amazon can shop elsewhere for additional electric vans if it chooses. Rivian is not the only automaker developing electric commercial vehicles, and it knows it has to surpass expectations when it comes to delivering the numbers, but also in terms of quality and efficiency.

In other words, Rivian’s destiny is in its own hands, at least in part. 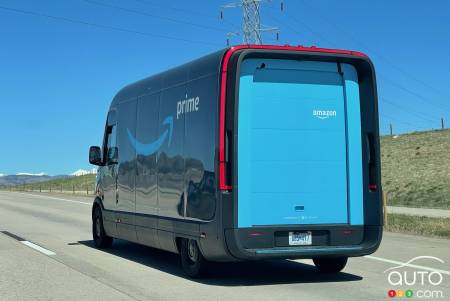 Mega-company Amazon has placed a mega-order for 100,000 electric delivery vans with independent EV maker Rivian, a company the delivery giant announced a $70...

Rivian Will Start Deliveries of its R1S SUV in January As...

Contrary to mid-week reports that had deliveries of Rivian's R1S being delayed into Q2 of 2022, the all-electric SUV will be delivered to customers starting ...