At about this time last year, Tesla produced a first teaser image of its future Model Y SUV. This week, Elon Musk revealed a second image during the company’s annual shareholders’ meeting.

At this rate we could see a finished product sometime around, oh, 2046. Fortunately, the automaker is promising to introduce it sometime before that, more specifically in March 2019. What will be especially interesting is the time that elapses between its official reveal and the beginning of production. The Model 3 experience gives us reason to be wary.

The second image unveiled this week doesn’t actually reveal much. Only a part of the front half is really visible. But it is enough to discern that the Model Y’s fascia is fairly vertical in orientation, and will likely borrow the signature found on the Model X. Assuming the image represents what the eventual vehicle will look like, it appears the Model Y will be all about curves, at least more so than its siblings in the automaker’s lineup.

As for the format, picture a Model 3 that stands higher on its four legs.

Elon Musk made some interesting comments regarding the conception of the vehicle. He mentioned for instance that no leather would be used for the interior, including on the steering wheel… assuming that it will actually have a wheel. Musk was likely joking about that last point, but it did serve as a hint that the Model Y will come equipped with the latest-generation autonomous driving technologies developed by the company, called Autopilot.

If all goes well, the Model 3 should be ready for its big reveal in March 2019, with production to get underway later that year.

Given the company’s track record in that regard, we’ll hold off on making any bold predictions. We’ll be watching to see if the rate of production of the Model 3 goes up and stays up; if it does, there could be reason to think Tesla might deliver on its promise for the Model Y. 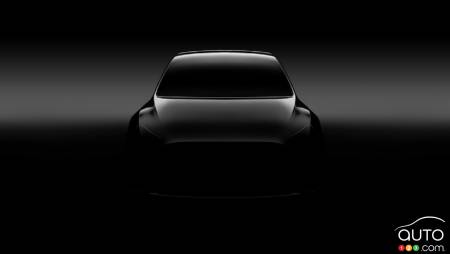