We’ve known for quite a while that Tesla is working on a pickup truck, and that it isn’t the only company doing so. Since the company announced its plan to produce an electric truck, Rivian has presented its plan for a similar type of vehicle (at last year’s Los Angeles Auto Show, to be precise), and other automakers active in the segment have been getting in on the game as well. Everyone, it seems, wants to produce an electric pickup.

We’re about to see the results of Tesla’s work; the company’s big boss Elon Musk wrote on Twitter that the truck would “most likely” makes its public debut in November. No firm date was given, but we can well imagine it being on the occasion of the next Los Angeles Auto Show.

All we’ve seen of the future product up to now are a coupel of teaser sketches released by Tesla. In essence the company took its semi truck and modified to make it look like a pickup. Really, the drawings served more to create a buzz about the upcoming product than reveal what the eventual truck will actually look like. We fully expect the future Tesla truck to look quite different.

After the Model Y, the Tesla pickup will take aim at the most popular segment in the automotive industry in North America. It’s a segment that’s as lucrative as it is difficult to pierce, so the effort is worth it, according to companies like Tesla. We can expect the maverick company to spare no effort.

For its part, Ford plans to have its electric F-150 ready for 2021. At GM’ the plan is to produce an electrified version of the Chevrolet Silverado.

There will be winners and losers in this battle, but one thing’s for sure: the pickup universe will look pretty different by three of four years from now. 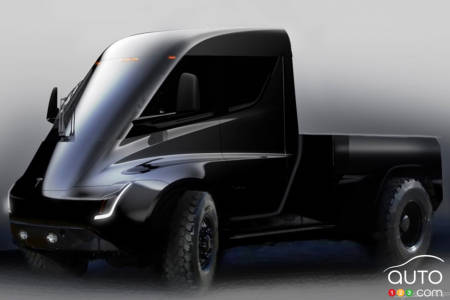 Elon Musk Talks Cybertruck, Says its Design Will Get “Sli...

In a Twitter conversation this week, Elon Musk seemed to bow to reality and acknowledged that the design of Tesla’s Cybertruck will get “slightly better”; he...