Even with a number of public education campaigns over the past few years, despite increasingly severe penalties imposed by law in every Canadian province, and in spite of increased police enforcement of these laws, many motorists continue to flout the dangers of using hand-held mobile devices while driving.

Indeed, a massive majority of Canadians, or 83%, believe that the problem of texting while driving is only getting worse, according to a survey undertaken by the Canadian Automobile Association (CAA) in November 2017. It is now deemed by most Canadians as worrisome a road safety problem as drinking and driving.

“Studies show drivers are as much as 23 times more likely to get into a collision when they text and drive. It’s important we all put our devices down and stay focused on the road.”

Canadians are also concerned by other sources of distraction for drivers, such as conducting phone conversations, emailing while at the wheel, or speaking to or interacting with the growing number of technologies integrated in newer vehicles.

Here’s hoping that if you really can’t stop yourself from texting no matter where you are, even if it’s behind the wheel, your vehicle is equipped with an automated emergency braking system with pedestrian detection, adaptive cruise control or lane departure warning to prevent the collision that you’ve greatly increased your chances of having. You might also want to put on the top of your wishlist for your next vehicle a hands-free texting function with voice-text conversion, found in some newer Nissan models for example.

Of course, as pointed out by CAA’s Mr. Walker, the easiest, cheapest and safest thing to do is just to turn off your smartphone before putting your car into gear! 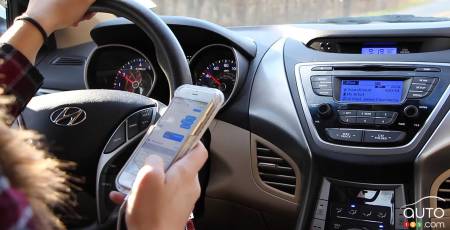 Does legalizing marijuana for everyone scare you as a driver? Here’s what CAA-Quebec members have to say about that.

Most parents with new teen drivers are unaware that car crashes are the number one cause of death among teens. Here are five things (and more) you should kno...