Vehicle theft is nothing new. When criminals steal a particular model, quite often before long it's in pieces, the parts ready to be resold. Recently, there was a spate of thefts of catalytic converters. Mirrors have also been targeted by organized theft rings.

In the Detroit area, a new target of these rings has emerged in recent weeks: the steering wheels of Chevrolet vehicles.

A number of residents in that area have found that their cars have been broken into, even though they were locked and had no valuables inside, and discovered the steering wheel missing. And why that particular part? For the airbag in contains. It’s not exactly clear why thieves are targeting specific products like the Chevrolet Equinox and Malibu, as reported by Detroit's Fox2 station this past May. No one is even sure why Chevys are being targeted and not other brands.

One possibility, of course, is that it’s simply easier to remove a steering wheel from a Chevrolet model.

The city of Eastpointe, Michigan, has been particularly hard hit. Authorities there received 11 reports of thefts over the first weekend in May. 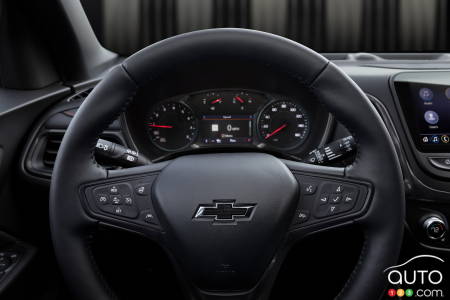 Aside from the desire to get their hands on an airbag, why do it now? That would be because of a supply shortage that has hit the industry since the pandemic began, and which has created a black market for certain items, airbags among them. Mechanics say stolen goods can be resold for hundreds or even thousands of dollars.

Unfortunate consequences
Obviously, the missing steering wheel makes a vehicle unusable, but replacing it can cost the owner a few thousand dollars. If the thieves were to steal only the airbag, that would mean about a $300 to $500 repair. And it's not just private vehicles that are being targeted by criminals; dealerships and businesses are also being hit.

For now, the problem seems to be limited to the state of Michigan, but Chevrolet owners should be vigilant. One way to prevent theft is to have a steering wheel locking bar.

The National Insurance Crime Bureau (NICB) has released the list of the 10 most stolen models of 2021 in the US of A. Find out which 1997 model turned out to...

There are the expected models and there are surprises on the list of the 10 most stolen vehicles in the U.S. in 2020. Just like every year, really. once agai...

The ongoing microchip crisis is hitting some automakers harder than others, especially the American ones. Ford and Chevrolet in particular are seeing product...