Remember the infamous moose test? Last year, we reported on the poor results posted by the Toyota RAV4 during the test carried out by Swedish publication Teknikens Värld. Essentially, the SUV was unable to successfully avoid hitting cones during evasive manoeuvres at a set speed, the rear of the vehicle going astray in a disconcerting manner.

This year the new Prime PHEV variant of the compact SUV was put to the same test, and it too came up short. Now, this version is carrying the adjusted stability control system, so it’s assumed the extra weight of the vehicle is responsible for the disappointing test performance, and that further adjustments will be required.

Still, this is a source of concern; seeing how the RAV4 Prime performs in the test, no driver would want to find themselves in a situation where they have to make such an evasive manoeuvre. And we're not talking about excessive speed here: the test was first run at 72 km/h. The vehicle failed until the speed was reduced to 63 km/h.

According to the publication, the fault lies, again, with the RAV4 Prime's stability control system, which failed to engage and prevent the vehicle from skidding out of control.

It should be noted that Teknikens Värld also tested the Mitsubishi Outlander PHEV and Volvo XC40 Recharge in the published video and neither was able to complete the course at 72 km/h. Three failures, according to the magazine, but only one was really bad.

Toyota Motor Europe said that it would “take steps to ensure that the RAV4 Plug-In Hybrid can pass Teknikens Värld's test”.

The publication is expected to carry out a second test once the further adjustments to the stability control system have been made.

The Toyota RAV4 Prime is undoubtedly the vehicle of the year that just ended, but this issue is becoming worrisome. Toyota will be wanting to act promptly to address this.

See also: 2021 Toyota RAV4 Prime Review: What Do You Get the SUV That Has Everything? 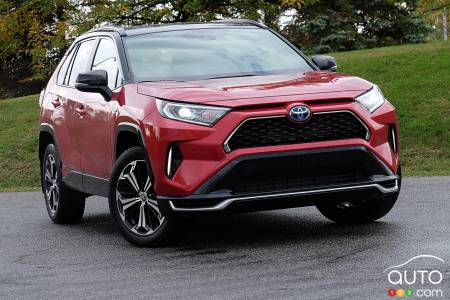