While many automakers have embraced the move to electric mobility, some are showing at least some reluctance. And for many of those, the belief is that the key to replacing the current generation of traditional gasoline engine will require more than one type of alternative.

Case in point, Toyota. Yes, the automaker has embarked on development of electric vehicles, albeit a little tardily, but it continues to devote time and resources to hydrogen-powered engines and vehicles. The company confirmed this week that it is partnering with Yamaha to develop a V8 engine that runs on hydrogen as it tires to make the case that combustion engines have their place even in a domain dominated by electric-powered vehicles.

Toyota, as mentioned, is not new to the hydrogen concept. But there’s an interesting particularity to this new joint project. Instead of hydrogen being used to generate electricity to power the car, as is the case with Toyota’s Mirai model, it is simply used instead of gasoline, leaving water vapors as the only emissions.

The engine used as the starting point for the new project is Toyota’s 5.0L V8 found under the hood of the Lexus RC F, among others. The hydrogen version develops 449 hp and 398 lb-ft of torque, according to Yamaha. That's not far off the 472 hp and 395 lb-ft of torque of the gasoline variant.

Interestingly, this hydrogen engine project follows a joint agreement between Toyota, Yamaha, Subaru, Mazda and Kawasaki, by which the companies agree to work at expanding the use of alternative fuel technologies. The partners plan to experiment with biodiesel and synthetic fuels in addition to hydrogen. 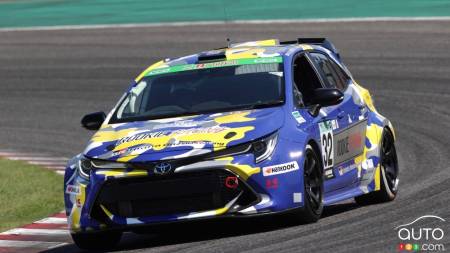 Last year, Yamaha also partnered with Toyota to develop a hydrogen engine for use in a 5-door Corolla Sport car in the Japanese Super Taikyu series. The relationship between the two companies goes back even further, Yamaha having developed the 4.8L V10 engine used in the LFA supercar.

Some may remember that BMW had worked on a hydrogen engine with a 7 Series in the early 2000s. The time was not right then, but the times changed, evidently. Chnese automaker GAC also announced late last year that it was testing a hydrogen-fueled combustion engine.

Toyota hopes that hydrogen can help reduce the climate impact of combustion engines while still allowing driving enthusiasts to enjoy them, especially since older combustion engines can be converted to run on hydrogen. However, not everything is perfect with hydrogen, which faces infrastructure challenges, as well as emissions produced in the production and distribution processes.

Hydrogen, electricity, hybridity, and many others. It seems likely that the future will include several solutions, at least in the mid-term. In the long-term, will one solution prevail, as it did in the last century with gasoline?

Stellantis has announced a new investment of $99 million in three North American plants to develop and produce a new 4-cylinder turbo engine. The biggest ben...

The Toyota Highlander will lose its V6 engine in 2023, the automaker having chosen to replace it with a turbocharged 4-cylinder unit. The new engine offers m...

Toyota Will Invest $70 Billion in Plan to Electrify its L...

It may have long been a BEV-skeptic, but Toyota’s attitude towards the technology is “evolving”, shall we say. Today the automotive giant unveiled its plan t...