Two models were announced at that time, if you recall: an automated platform for businesses (EP1) and a commercial van, the EV600. Built on the company's Ultium platform, that van is expected by the end of this year with a promised range of around 400 km. The distribution giant FedEx Express will be the first customer for the EV600 model. 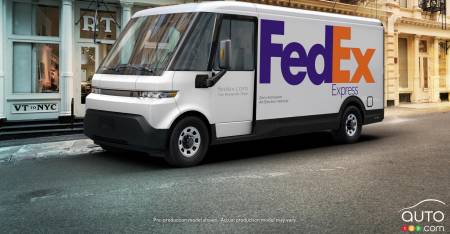 Yesterday, GM CEO Mary Barra announced two new electrified commercial vehicles. The first will be a full-size van to come out of the Chevrolet division. The other EV planned is a mid-size truck using both the Ultium platform and the Hydrotec hydrogen fuel cell.

“We will have electric solutions for almost any hauling or towing task you can imagine. Both will complement BrightDrop and keep our commercial fleet market share growing. We will share more details about these products as we move forward.”

That's in line with the White House's just-announced plan to have U.S. automakers selling electrified vehicles by 2030. The target for passenger vehicles is for electrified vehicle to account for 50 percent of sales by that year; but the Biden administration is also laying out a plan for commercial vehicles, with targets to be met starting in 2027.

Clearly, GM is doing what it can to get out ahead of the wave.

GM Says It Will Stop Selling Gasoline-Powered Vehicles By...

GM has announced that it will no longer sell gasoline- or diesel-powered vehicles as of 2035. The plan is ambitious, but between now and then sit 14 years, a...

GM Says its Electric Vehicles Should Be Profitable as of ...

General Motors CEO Mary Barra says the company anticipates its electric vehicles will be profitable as of 2025. Recall that a few years ago Barra had predict...