Elsewhere in the world, Volkswagen sells a pickup truck that goes by the name Amarok. Since the model has been on the market, there have been persistent rumours about its possible arrival in North America, but none of these have yet proven to be founded in truth.

They say there's never smoke without fire, but in the case of the Amarok coming here, wishful thinking may have spread the rumours rather than facts. Now, however, there may be more substance to the speculation: on May 13, Volkswagen filed an application to register the Amarok name for the North American market. The application was spotted by the good folks at the CarBuzz website.

In Europe, where it is currently sold, the Amarok competes with models the Ford Ranger and the Toyota Hilux, among others.

The current generation of the vehicle is not currently available in North America because it was not developed with North American standards in mind. However, the second-generation model expected in the next few months will be a cousin of the Ford Ranger, and is the fruit of a partnership between Volkswagen and Ford that the two companies announced in January 2019 at the Detroit Auto Show.

Approval of the model for our market then becomes much more plausible. And now the name is registered. Interestingly, aesthetically the Amarok is fundamentally distinct from the Ford Ranger, as evidenced by the published sketches foreshadowing the next iteration of the Amarok. 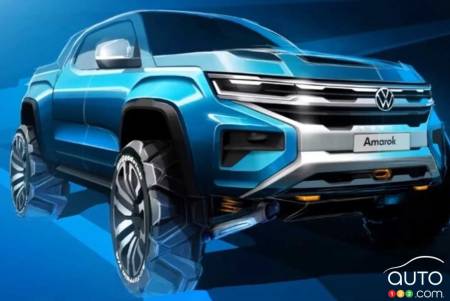 Photo: Volkswagen
Other image of the next Volkswagen Amarok

So, is a Volkswagen pickup truck in sight for our market? We’ll wait and see, absent official confirmation. Senior management at VW has already said that the project is far from being a priority. Back in 2020, the automaker noted that the chances of the Atlas Tanoak concept going into production to rival the Honda Ridgeline were slim.

Reports from other sources say that the Amarok will not be sold in North America, despite being built to North American standards. However, a smaller model like the Tarok concept would still be a possibility.

As you can see, the rumours and speculation go in all directions. The only guarantee is that the name has been registered. However, such a registration does not confirm that a model is in preparation. The manufacturer is simply giving itself an option, that's all.

Nevertheless, it's still interesting and it fuels the discussions. We will follow this closely.

The recently announced partnership agreement between Ford and Volkswagen will result in the arrival of a German pickup on the North American market. The truc...

When Volkswagen launched the Amarok in 2009, Canada and the U.S. were both overlooked. Now, according to sources quoted by Autoblog, the German automaker is ...

For the umpteenth time, Ram says it's thinking of bringing a mid-size pickup back to its roster. Will this time be the charm?