The automotive world can be serious, staid even, but it’s also full of passionate people like those who made this outsized VW Beetle Automotive columnist: Daniel Rufiange , Updated: 2021-10-20

Sometimes, your Facebook feed can show you an image that makes you do a double-take. This week, we spotted one attached to an article from The Drive website, published in August 2020. That piece told the story of a Volkswagen Beetle of a different size. A unique version of a model that has sold over 21 million units worldwide in its lifetime.

So what if the story dates from the first year of the pandemic. It’s worth telling, if only to show that not everything in the wonderful world of cars should be taken too seriously. And anyways, true, crazy passion is pretty irresistible.

Just a little quiz to start off, though: looking at the image above, try to see if you’re staring at a regular Beetle beside a smaller hand built-one, or a giant Beetle created, well, for the sheer fun of it. 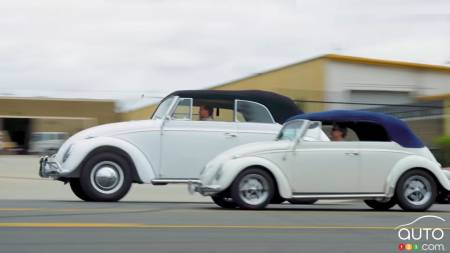 Photo: YouTube (Barcroft Cars)
The two Beetles, side by side

140-percent bigger
The giant Beetle was made by the Tupper family, who clearly feel much love for the Bug from Volkswagen. How else to explain their decision to make a replica of their 1959 convertible version, but 50-percent bigger. There was only problem with the plan: at that size, it would have been too big for the road. So they thought slightly smaller, and went with a version 40-percent larger than the original.

Their custom Beetle is built on the chassis of a Dodge pickup truck and inherits the 5.7L Hemi V8 engine that often powers that model. To be able to create an identical replica, they had their 1959 version laser scanned. The result was adjusted to the desired scale and that's when the manufacture of the parts (body panels, moldings, various components, etc.) began. 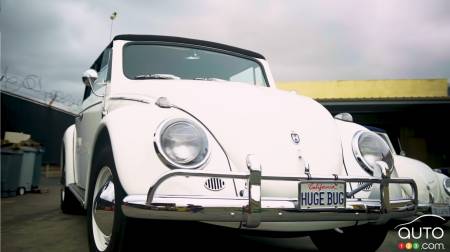 The outsized Beetle is equipped with all the creature comforts of Dodge's modern platform, including power steering and brakes, heated and cooled seats, a set of hidden gauges that disappear when the car is parked, and a fake clutch pedal that also allows for emergency braking, as the car is equipped with an automatic transmission.

At the time of the Drive article, the giant Beetle had not caused any accidents on the road, but you can guess it must be an attention-grabber on the road. Scott Tupper, the youngest member of the family, said that despite the respectable offers received, the family had no intention of selling it.

This giant Beetle, 140 percent larger than the original car, is as big as a Hummer, but as capable as a modern pickup truck. 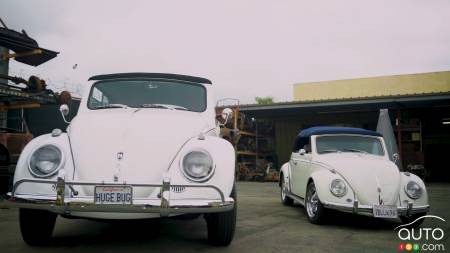 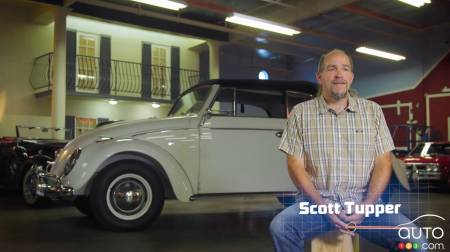 Could the Volkswagen Beetle Make an All-Electric Comeback?

No, Volkswagen has not announced the return of the Beetle in electric form. However, the automaker’s CEO made an interesting comment during a recent round ta...