In virtually all industries, it’s a fact of life that new technologies are always far more expensive initially. It’s only when the early R&D work is done and products scale up on the market that pricing comes down. Personal computers are a case in point, high-end televisions another. Recall that at the turn of the 2000s, the average 42-inch plasma TV cost $10,000.

The same story is playing out with electric vehicles, and it explains why government choose to implement incentives programs to boost sales. Gradually, productions costs are coming down, in part because production of batteries and electric motors is scaling up like never before.

Industry watchers have been waiting for signs of a tipping point for EVs, in other words the day when their selling prices will be on a par with equivalent gasoline-powered models.

When that happens, the consensus view is that consumers will turn massively towards electrified vehicles.

Reinhard Fischer, senior VP for the Volkswagen Group in charge of strategy for the VW brand in North America, told Automotive News this week that the group’s $50 billion investment in electric technologies will result in lower production costs for EVs. In fact he expects price parity between combustion-engine and electric vehicles in the near-future.

"We strongly believe that the tipping point is near, and that tipping point will be price equity. Once you overcome the fear of something new, the EV is the better choice for you. When you put pencil to paper, owning a full-electric vehicle costs about half of what a gas car costs me to operate." 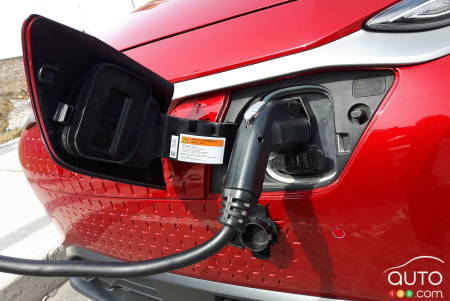 Across the Volkswagen Group’s 12 brands, the company aims to have 70 fully electric models on its roaster worldwide by 2028, translating into 22 million electric vehicles in service.

The company acknowledges that consumers continue to have concerns about different aspects of EVs. For example,

"There is still a fear about driving electric cars through water. For 50 years, we've educated people that electricity and water don't mix. (Plus), range anxiety has now been replaced by charging anxiety.”

The executive is confident however that these fears are temporary and will be overcome in short order.

"A hundred years ago, gasoline was sold at pharmacies. Today, we have 122,000 gas stations in the United States. Electric charging is going to be exactly the same."

The Volkswagen Group has bought enough batteries to be able to produce 50 million electric vehicles in the next few years; it’s also working on a new subcomp...