In late March, the head of the R division at Volkswagen, Jost Capito, was stating publicly that the long-rumoured 400-hp variant of the Golf R would never see the light of day. Those disappointed by that news will be cheered to hear that the idea of creating such a version is not dead at VW HQ.

A report by website Autocar website indicates that a 400-hp Golf R Plus could well go ahead, once the next-gen Golf launches. The simple reason is that Volkswagen Group CEO Herbert Diess is a believer in the project. And if there’s one vote that can override that of the R division head, it’s the company’s big boss.

From within company walls, sources have confided that the Golf R Plus would become the company’s halo model, sitting above the Golf R in the lineup hierarchy. You’ll recall that in 2014, the automaker did present a concept car called the Golf R 400, and had even started testing it. But the diesel scandal erupted not long afterward, in September 2015, and the project was quietly shelved. 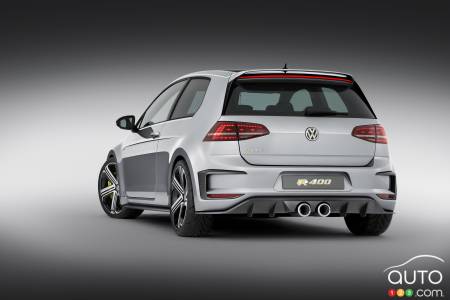 Things have evolved since then, of course, and it appears that Volkswagen has even moved forward on the development of the R Plus. A sketch of the model is said to exist, again according to internal sources, and it reveals an aggressive design signature, oversized wheel arches and a wider body.

A 400-hp Golf R Plus would be a natural competitor to the Audi RS3 and to the Mercedes-AMg A45. As Jost Capito mentioned last month, the way the company sees it is that Golf R buyers are not typical VW shoppers. For starters, they have more money to spend, and they’re looking for something out of the ordinary.

The next-generation golf is expected next year; the R variant should follow soon afterward. We expect that it would be only then that we’ll see if the latest rumours regarding a beefier Golf R turn out to be well-founded or just more wishful thinking.

No sooner did rumours surface of a possible Jetta R with AWD, Volkswagen has squashed the idea. The company does not believe there is sufficient interest to ...

Volkswagen this week unveiled the revised logo that will distinguish the R and R-Line versions of its models from now on. And unlike the new brand logo unvei...