The Volkswagen ID.4 is proving to be a popular model for the German carmaker, so much so that the wait times to get one have become almost legendary. Those hoping to get their hands on this electric crossover, or are waiting for the one they've ordered, can take heart from this: production of the model has just begun in the U.S.

Since its launch, Volkswagen has assembled the ID.4 in Germany, but the company has said from the start that it planned to start producing the EV at its plant in Chattanooga, Tennessee at some point. That point is now, with the first 2023 models rolling off the assembly line at that plant. These should start showing up at North American dealerships in October.

This will have a drastic effect on availability and, by extension, wait times. As a point of comparison, Volkswagen sold 4,415 ID.4 EVs in the U.S. in the first six months of 2022. That is actually down from 2021, when 16,742 models were delivered during the full year. In Canada, we don't have figures for this year, but the company sold 536 ID.4 EVs in the last quarter of 2021. 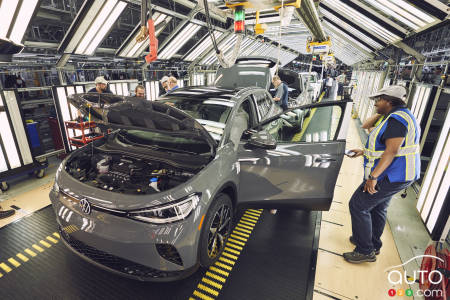 Photo: Volkswagen
A grey 2023 Volkswagen ID.4 in the Chattanooga factory

It should be noted that the 2023 ID.4s being built south of our border will be slightly different from the 2022 model sold up to now. For one, Volkswagen says the centre console has been redesigned and that the 77-kWh battery will come from another American supplier, Georgia-based SK Innovation. Some of the materials that make up the interior will also come from American suppliers.

But that’s of little concern to impatient customers. For all intents and purposes, we're talking about the same model, and after the long waits, we're betting customers who ordered one will be very happy to receive it, regardless of its origin. 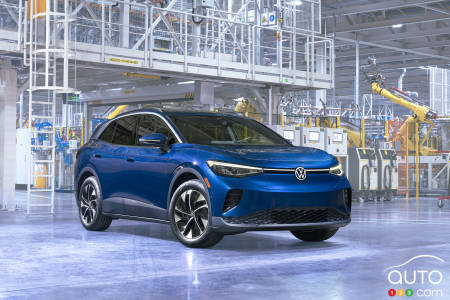 Volkswagen Will Expand Tennessee Plant to Build EVS There

Volkswagen plans an expansion of its plant in Chattanooga, Tennessee to enable production of electric vehicles destined for the North American market. The ne...