When Volkswagen redesigned its Passat for 2012, its focus was primarily the American market. In fact, the model was designated to inaugurate the Volkswagen plant in Chattanooga, Tennessee.

And its career got off to a flying start. In its first years on the market, VW was selling over 100,000 units a year south of the border. But the car's popularity has plummeted dramatically since then, and in 2019, only 14,123 Passat cars were sold. As a result, Volkswagen is in solution mode. The manufacturer is considering transforming its mid-size sedan into an electric car to halt its rapid decline. At least, that's what Volkswagen's COO for North America, Johan de Nysschen, said last week.

"(The) Passat is a car that has a finite lifespan in terms of our planning. It's probably a reasonable assumption that when this Passat reaches the end of its lifecycle, its successor will probably not feature an internal-combustion engine."

If nothing else, credit the executive for not beating around the bush. The company has previously hinted at the idea, saying that its ID Vizzion and ID Space Vizzion concepts could give a taste of the design of future Passat cars sold elsewhere in the world. Production of the ID Vizzion model has already been confirmed for 2022, and the ID Space Vizzion will follow shortly thereafter. 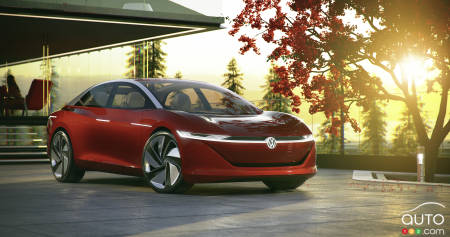 Those two models are based on the Volkswagen Group's modular EV-specific MEB platform and VW says they offer a range of almost 500 km according to the EPA (Environment Protection Agency) test cycle. Using a rapid charger, it will possible to recover 80% of the battery pack’s capacity in just 30 minutes.

Given the current Passat's low sales volume, it would be surprising if Volkswagen were to once again redesign different models for America and the rest of the world. Which makes it a safe bet that a Passat electrified elsewhere would probably get the same treatment in our market as well.

We Could See an Electric Version of the Lincoln Corsair.....

Lincoln will develop an electric version of its Corsair SUV for 2026, and build it at the automaker’s plant in Oakville, according to Automotive News. Ford h...