Volkswagen is working on an upgrade of its best-selling SUV globally. Later this year the automaker plans to unveil a Tiguan with new styling, both front and rear, as well as an improved multimedia system. The powertrain used in Europe will also be overhauled. However, our North American version will get its revision until 2021, so the changes will ultimately affect the 2022 edition of the model available in our market.

Recall that the Tiguan sold in Europe is a shorter version of the one offered here. The version available to Canadian consumers was actually designed primarily to appeal to the American market - although motorists north of the border seem to like it too, despite its rather unexceptional powertrain. Note as well that in Canada, unlike Europe, a three-row seat version is possible. 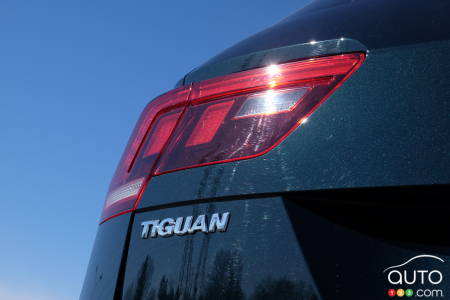 The updated version to be introduced next year will likely adopt the brand's updated visual signatures, but for now, Volkswagen has only published a sketch to whet our appetites. The full styling of the new Tiguan should be unveiled before the end of the summer, at least as far as Europe is concerned.

On board, the multimedia system will be replaced by the brand's new MIB3 unit. The latter will be similar to the one revealed with the eighth-generation Golf that made its debut last fall, the company said.

It remains to be seen whether our versions will get beefed-up mechanics. That’s a relevant question, since the main criticism of the current Tiguan is its lack of power. Its 2.0L turbocharged 4-cylinder engine produces 184 hp and 221 pound-feet of torque, but must haul around a body that weighs about 1,750 kg (in a four-wheel-drive variant). The model that was offered to Canadians until 2017 was 100 kg lighter yet benefited from a more powerful 200-hp engine.