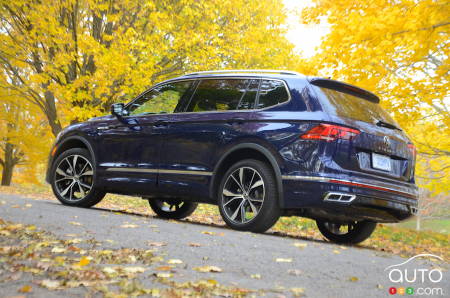 The Tiguan had a promising early career after Volkswagen launched it a dozen years ago. It met the wants and needs of those looking for the advantages of an SUV (space, elevated driving position, all-wheel drive), while offering the driving pleasure of a car.

Problem was, Volkswagen waited too long to redesign it. By the time it did, for 2018, sales of the SUV had frittered away, with many rivals having merrily updated and upgraded themselves in the interim.

That 2018 redesign delivered a fundamentally different Tiguan. The shorter version we would have liked to see here remained in Europe, and instead our market was saddled with a model designed for the average America. Meaning a larger SUV, and one that pained to display any of the known. Volkswagen DNA. For example, mechanically, it was given a powertrain that was immediately much discussed, but for all the wrong reasons. With only modest and mostly poorly distributed power at its disposal, drivers often had the impression they were pulling a trailer or driving with a partially activated parking brake.

Despite this, the model sold well, which shows the strength of a strong nameplate and brand image that has long engendered loyalty. 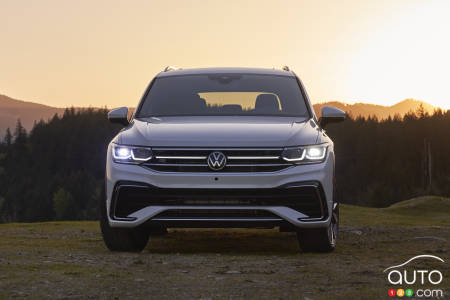 Reworked styling
On the outside, the nose has been redesigned and some variants feature a grille that can be illuminated. As for the wheels, which are 17, 18, 19 or 20 inches depending on the model, they all have a new design. The 20-inch wheel is a first for the Tiguan in Canada.

Inside, richer materials await and elements have been improved, the model being given new, sharper colours, brighter ambient lighting, greater connectivity capabilities and the addition of touch-sensitive buttons for a more streamlined presentation... at the cost of more-complicated ergonomics and usability.

Maybe VW tried to do too much; in any case the result is a better-looking interior, but also a less practical one.

For all the details about the offering and what each variant has to offer, the model configuration tool on Volkswagen's website remains the best way to get an accurate and up-to-date picture. 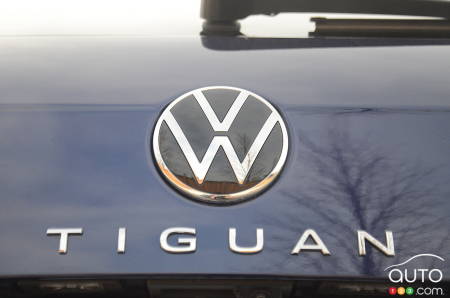 The engine
I was referring to the anemic performance of the engine, the single biggest fault of the outgoing Tiguan. That's no longer these, this even though the mechanics haven't been changed. The key is that the transmission has been upgraded. More specifically, its calibration and that of the returning 2.0L turbocharged 4-cylinder engine have been revised. Hats off to VW for fixing what wasn’t working with the powertrain.

Before, you'd press the throttle, only to find dead time and a very lazy response. It felt like the engine was struggling to move the model. With the 2022 Tiguan, this is much less the case. There's still a little hesitation at the start (the extent of which depends on the strength of the acceleration), but otherwise, the mechanics respond much better. So much so that you get the impression that a new 2.0L 4-cylinder engine is under the hood.

The tweak makes the Tiguan a more interesting SUV. It still has more American than German DNA, but at least it's no longer handicapped by an anemic engine. The combination of the engine and the 8-speed automatic transmission now does the job you'd expect.

As for fuel consumption, it remains within the norm; not exceptional, not terrible. My week of testing ended with a rating of 8.9L/100 km. 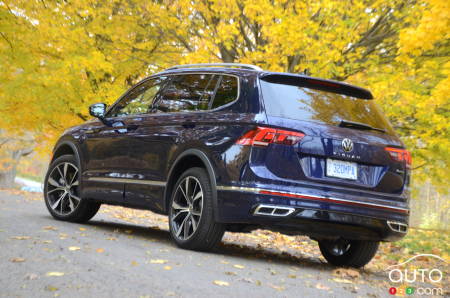 Continue on next page

Volkswagen has announced details of the changes coming to the 2022 Tiguan, which involve mainly cosmetic changes and equipment adjustments.

The 2022 Volkswagen Tiguan gets revised styling, updated technology and a new trim for the new year, and will carry a starting sticker price of $32,995 CAD w...