If the distinctive styling of the 2013 Ford Flex doesn’t wow the neighbours, its optional Active Park Assist will. I put two local dads into the driver’s seat of my tester and switched on the self-park feature. I simply told them to follow the instructions as they appeared on the navigation screen.

Both men were as giddy as school boys cutting class as the Flex reversed itself into a curbside parking spot with deadly accuracy. While both chaps had a vague awareness of self-parking technology, they had never experienced it firsthand.

After the magic of Active Park Assist, all three of us huddled next to the Flex commenting on its “Beach Boys” styling. At least that’s how we interpreted its boxy, retro appearance, finding unity in our preference for it over the mundane look of a minivan.

And really, that’s the allure of the Flex: It serves family needs like a minivan, but with a dose of coolness not found in a minivan -- the plebe of the automotive world.

Flex functionality
This is a well thought out vehicle in many ways. Its seating arrangement is 2+2+2, although a third seating position is available with the 60/40-split second-row bench in place of the two optional second-row bucket seats. This seating position is not a comfortable perch and should be considered a “when needed” asset, not a regular butt host.

Second- and third-row seating is accessed through unusually wide rear doors that open in a conventionally hinged manner. The width of the doors combined with the fold and tumble second row seats allow remarkably easy access to the third row. I sat back there and found adequate room for my 5’ 11” frame.

The first and second rows of seating provide marvellous room to stretch, which adds to the exceptional comfort of the Flex. Large sheets of glass ensure that all seating positions are granted expansive panoramas during road trips.

Plenty to spoil occupants
While I had the privilege of cavorting in an all-wheel-drive (AWD), fully loaded Limited version of the 2013 Flex -- powered by Ford’s acclaimed 3.5L EcoBoost V6 -- the base vehicle is by no means bereft of content.

The Flex hierarchy begins with the well equipped front-wheel-drive (FWD) SE, which is stickered at $30,499. Midrange between the SE and the Limited is the SEL, which is available in either FWD or AWD. Likely to satisfy the preponderance of Flex buyers, the SEL offers good value at $37,099 and $39,099, FWD and AWD respectively.

My top-shelf Limited was stickered at a rather steep $55,000, which included $11K worth of options, such as Adaptive Cruise Control, Collision Warning, airbag-equipped second-row seatbelts, power-folding third-row seating, voice-activated navigation, Titanium Appearance Package, and a panoramic roof that contained no less than four glass panels. My tester also included Ford’s spellbinding Active Park Assist. Yet as effective as the self-park technology is, there was something greater to spoil me.

Outstanding EcoBoost performance
Ford’s expanding line of EcoBoost engines utilize turbocharging, among other technologies, to increase performance without increasing displacement or consumption. The EcoBoost engine powering my Flex is a great example of this approach. It generates 355 horsepower and 350 lb-ft of torque.

Those numbers serve the Flex well, easily overcoming its 2,103 kg (4,636 lb) curb weight to deliver strong, steady acceleration along with an abundance of highway passing performance.

While EcoBoost engines are touted as more fuel-efficient, my best short-trip city consumption was 14.9L/100km according to the Flex’s onboard data. A short highway stint brought that figure down to the 11L range.

As rewarding as EcoBoost power is underfoot, the base engine in the Flex is no slouch and shouldn’t be overlooked. At 285 horsepower and 255 lb-ft of torque, it’s likely more than enough engine for most applications. Both V6 engines are paired with 6-speed automatic transmissions, with shift paddles accompanying selection of the EcoBoost mill.

Driving impressions
Perhaps the most subjective aspect to assess in any vehicle is the way in which it drives, and from this perspective I really enjoyed seat time in the Flex. The vehicle is notably solid and composed over rough surfaces and corners with surprising agility while also delivering a smooth, absorbent ride.

There are few V6 engines that I enjoy listening to, and the EcoBoost unit in my tester is among them. It generates a pleasing exhaust note that sounds rich yet isn’t annoying or excessive. Overall, the vehicle is quiet on the road and operationally refined, which makes it a delight on the highway.

It’s also a delight to wow the neighbours with a vehicle that parks itself. 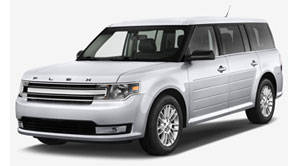 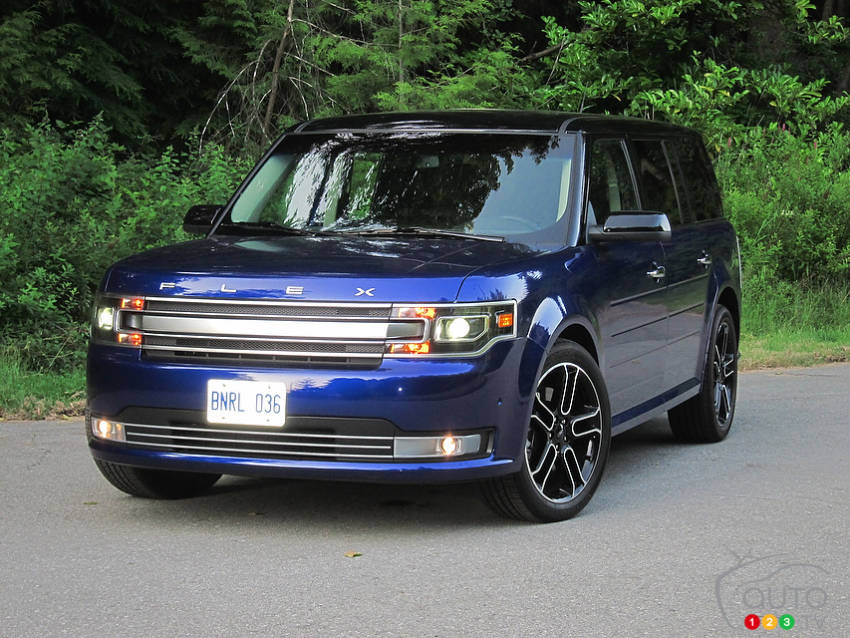 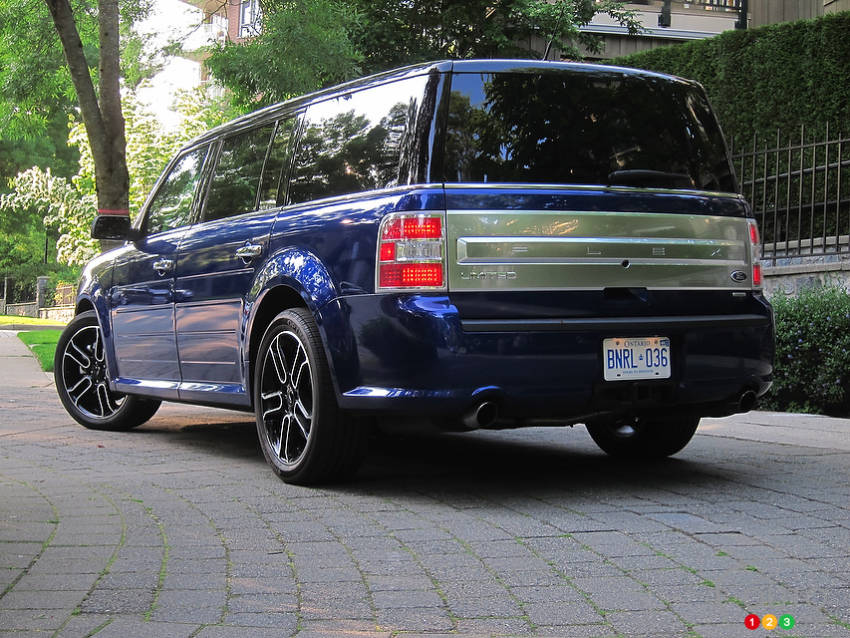 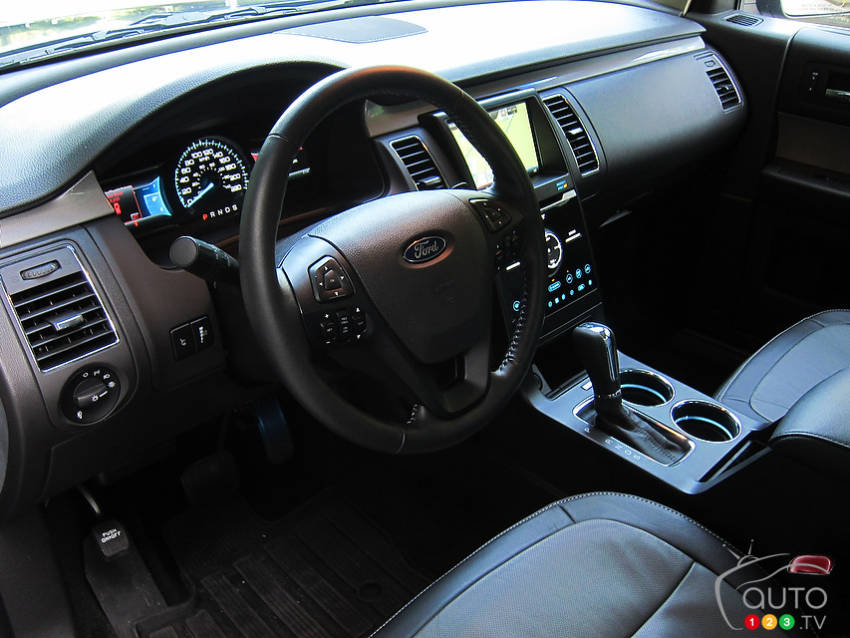 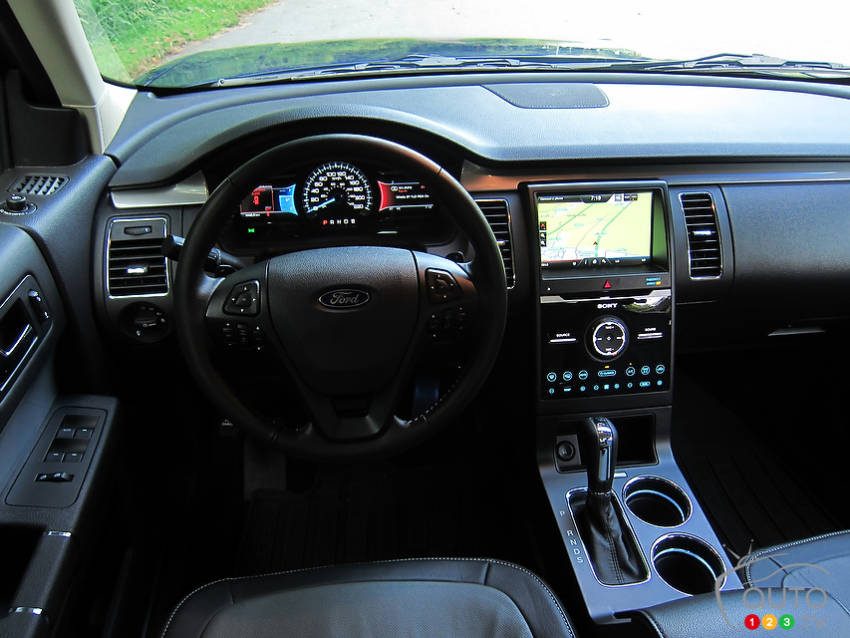