The new 2016 BMW 340i xDrive is the best non-M 3 Series ever created. In fact, choosing between this model and an M3 might be difficult. Don’t get me wrong, the latter is brilliant in almost every measure, but the new 340i might just be the perfect sports sedan, delivering ample power and exemplary handling in a more refined, sophisticated way.

Elegantly sporty
It’s certainly more understated from a styling perspective, albeit visually busier than a regular 3. Its lower front fascia is more aggressive thanks to the M Aerodynamics package, standard in 340i guise just like the stunning 19” alloys. My tester’s M Sport brakes with blue calipers were part of the optional M Performance package, mind you. The 340i’s rear styling enhancements are once again stock, with an edgier bumper cap framing two fat chromed exhaust tips. While this model looks nowhere near as intense as an M3, it certainly delivers a nicely balanced, assertive elegance.

BMW continues balancing sport and luxury inside. My particular example was finished in classy camel brown leather with ivory piping and contrast stitching. The seat detailing is beautiful, mostly made from solid full-grain leather surrounding strips of embossed diamond-patterned hides. The unique leather treatment fills the door inserts, too, complemented by leather-trimmed armrests. The leather quality is superb, and the seats are some of the most comfortable and supportive in the industry.

Along with the beautiful two-tone motif, BMW added dark grey-finished hardwood to the instrument panel, each door, and atop the lower centre console. Yet more metal accentuates the 3-spoke M Sport steering wheel, plus detailing around the shifter, the shifter itself, and elsewhere. Additionally, the roof pillars and headliner are trimmed out in black woven fabric for a sportier cockpit than the usual grey/beige.

Sumptuously driver-oriented
Along with these cosmetic upgrades, all 2016 BMW 3 Series sedans get high-quality, soft-touch surfaces including a pliable synthetic dash top and instrument panel, the latter extending below the knees and even encompassing the glove box lid, as well as soft door panels from top to bottom. The only surface made from harder plastic is the lower console, although BMW has increased its density for a nicer feel.

The switchgear is excellent, from the minimalist dials on the steering wheel spokes and simple, effective layout of its HVAC controls to the rotating iDrive controller atop the lower console, not to mention the power window switches, heated seat toggles, etc.

What’s more, the newest primary gauge cluster is a wonderful mix of analog dials floating above a high-resolution colour TFT digital background. There’s no noticeable change to the dash top infotainment display: The graphics are still superb, resolution is as crystal clear as anything in its class, and contrast is rich. Meanwhile, the iDrive system is easier to use than ever and as fully featured.

The sport steering wheel is wonderful, with ultra-slim spokes yet a thick, meaty rim that includes thumb spats to enhance grip at 9 and 3. A set of sizeable paddles turns the 8-speed automatic transmission from a silky smooth cog swapper into a blisteringly quick performance gearbox. Simply press the rocker switch next to the shifter upwards for Sport mode or another notch forward for Sport Plus, which turns off traction and stability control, and it’s off to the races. This mode also enhances throttle and shift response while allowing the transmission to rev higher between intervals. Steering response is quicker, too. If saving fuel and reducing emissions take priority, flick it downwards past Comfort to Eco Pro at which point BMW’s EfficientDynamics technologies take over.

These include standard auto start/stop that shuts the engine down at stoplights and then immediately brings it back to life when you’re ready to go. Additionally, the brakes transfer otherwise wasted kinetic energy to the electrical system, limiting drain. It all works to reduce fuel consumption, enhanced by slightly retarded throttle response and shorter shifts. In Eco Pro mode, the BMW 340i xDrive is rated at 9.3L/100km combined with the 6-speed manual and 10.3L/100km with the automatic, which is impressive for such a powerful, performance-oriented luxury sedan.

Improved performance
It really does drive brilliantly. The new engine still displaces 3.0 litres, yet BMW chose to rename the model 340i, a strange move that only makes sense after getting behind the wheel. Engine output is up considerably since last year’s 335i, from 300 horsepower to 320, while peak torque gets bumped from 300 lb-ft to 332 and is now available from 1,380 rpm all the way to 5,000. These 6.6% and 10.6% increases, respectively, might not seem like much at first glance, but by the seat of the pants the new 340i feels totally rejuvenated.

The new mill makes particularly nice throaty noises all the way from idle to redline, securing its place on my favourite engines shortlist, while the 8-speed autobox is a hyper-quick shifting masterpiece of modern tech, and smoother than dual-clutch gearboxes―all this despite the 2016 BMW 340i xDrive auto being 57 kg heavier than the equivalent 335i xDrive it replaces at 1,733 kg (the RWD version weighs the same at 1,676 kg).

It certainly doesn’t feel any heavier through corners, the updated 3 providing its usual compliant ride with even more entertaining handling than the outgoing model. There’s an effortlessness to the way it goes about managing circuitous roadways that’s almost underwhelming, with a need to exceed posted speeds in order to up adrenaline output. Likewise, it achieves similar levels of grip whether tracking over dry, wet, snowy or nearly any other type of road condition.

Still, I can’t help but wonder how much more enjoyable this compact sedan would be if it weighed half a ton less. Right now, the 340i xDrive is only 138 kg lighter than a full-size Jaguar XJ AWD luxury sedan, although it weighs 17 kg less than a similarly powered Audi S4. The significantly more powerful Mercedes-AMG C 43 4MATIC tips the scales 43 kg leaner, mind you. Can you imagine that? An M-B that’s slimmer than a competitive Bimmer?

Still, the way the BMW 340i xDrive takes to the road silences my complaint, hightailing it to 100km/h in a mere 4.9 seconds with xDrive and 5.1 with RWD. That’s considerably quicker than last year’s 335i. Furthermore, BMW reworked the electric power steering for faster response and better feel, recalibrated the 8-speed autobox with wider spaced ratios as well, and added downshift rev matching to the no-cost optional 6-speed manual. The fact that you can still get this car with a manual says a lot about BMW’s respect for the 3’s hardcore enthusiast base and its legendary status as the ultimate sports sedan.

My verdict
Dressed up with such impressive luxury and performance, my tester’s $65,000 price tag was justifiable, especially when factoring in the BMW 3 Series’ better than average resale value. Then again, the 340i’s worthy competitors aren’t merely biting at its heels; the C 43 AMG I noted earlier and the new Infiniti Q50 Red Sport 400 are glancing backwards in their rear-view mirrors.

It’s nice to know competition is alive and well in the premium compact segment, but truthfully it’ll take more than feats of straight-line acceleration to replace the 3 Series as the benchmark sports sedan. 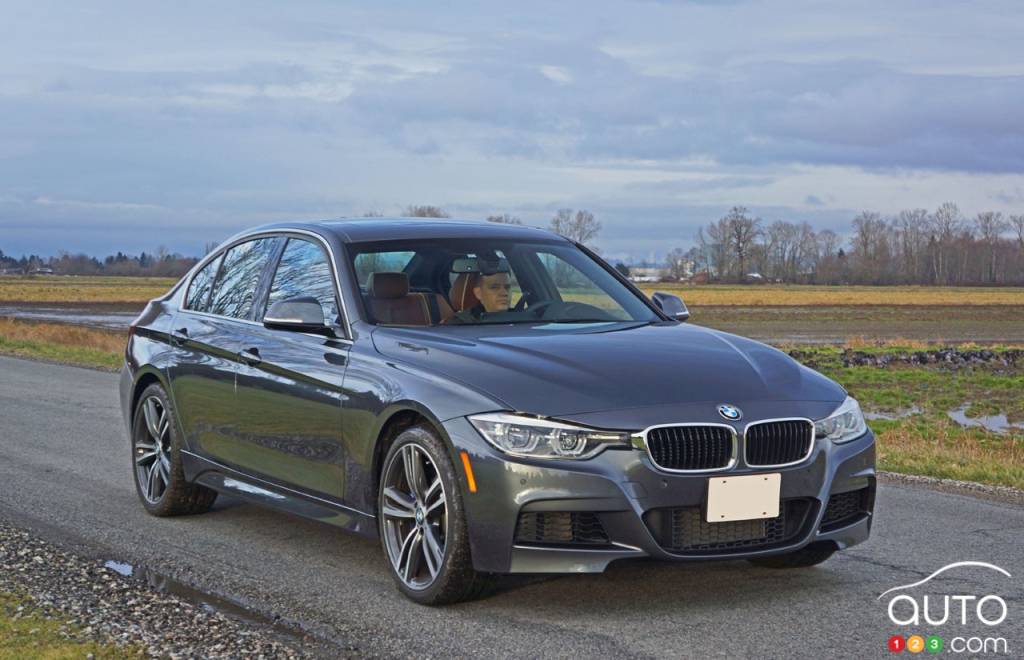 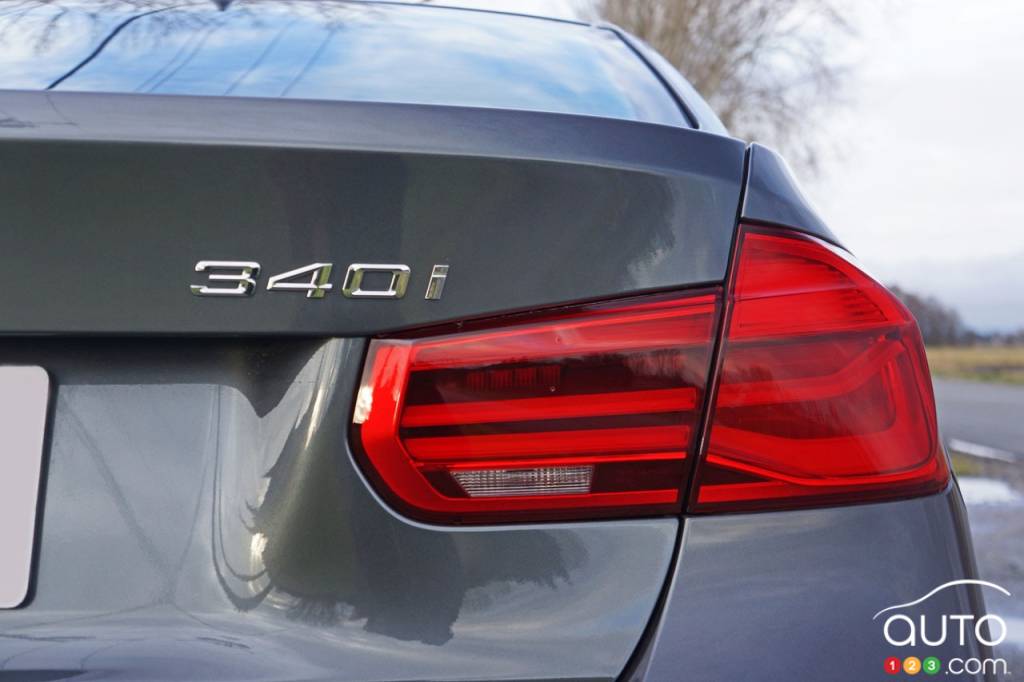 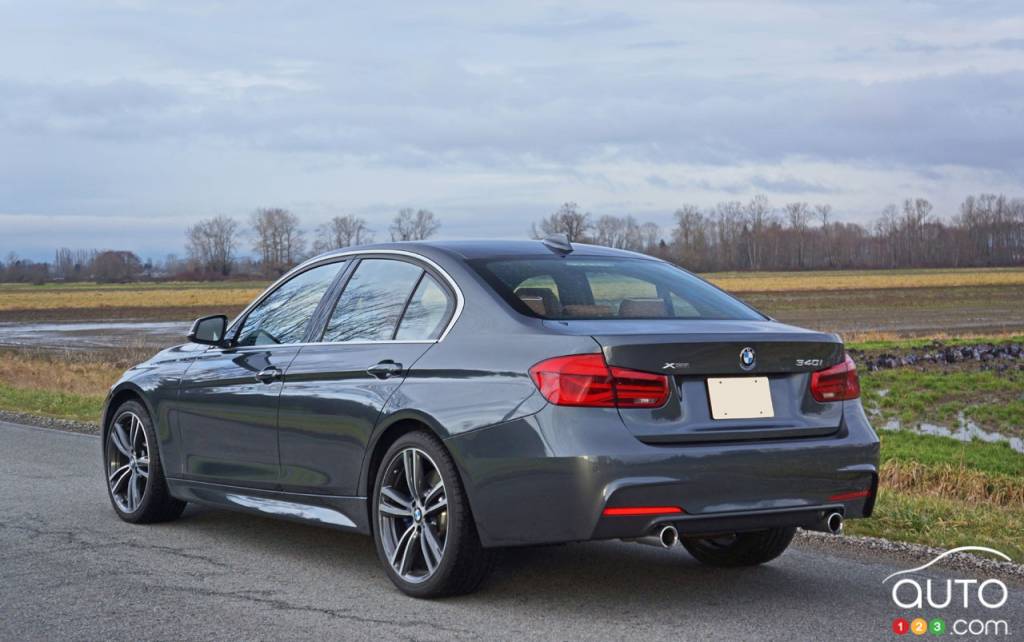 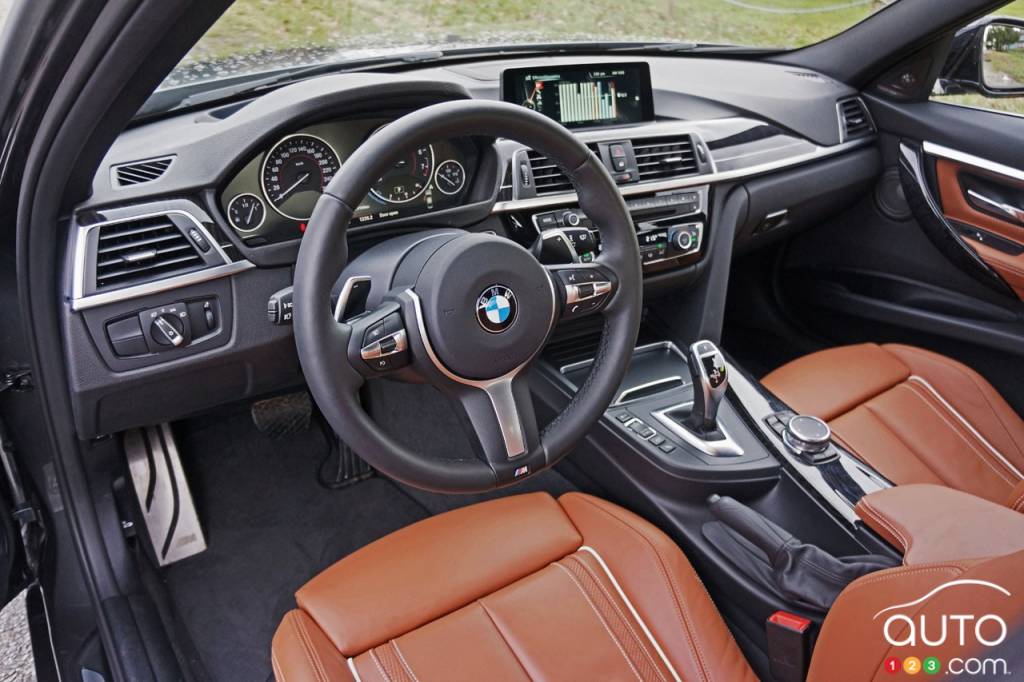