Those who buy a Jeep Wrangler do so for a number of different reasons. For some, the macho character of the vehicle is its main appeal, while others are attracted by its reputation for rugged durability. A great majority of them are hunting or fishing aficionados, who are often obliged to tackle roads in terrible condition and find that having a tough, 4-wheel-drive vehicle is a must. Only rarely will people give winter driving as a deciding factor in choosing a Wrangler. For the most part, people concerned about getting around on snow and ice will opt for a more conventional Jeep, like a Renegade, a Compass, a Cherokee or else a Grand Cherokee.

This is more than a little surprising, even strange when you think about it. We had occasion to try out a 2017 Jeep Wrangler Unlimited for a few weeks at the beginning of this winter, and wanted to share our impressions with you. As it happens during those few weeks we were subjected to warm temperatures, freezing rain, a sudden drop to frigid temperatures and some fairly significant precipitation.

So how did the off-road hot-shot fare?

A positive report card
It’s worth keeping in mind that the Jeep Wrangler was conceived largely for off-road use, with all the requirements that that entails. For example, the door openings are located quite high on the vehicle, to prevent water penetration when fording a river. The spare tire (which is full-size) is attached to the rear swing door to maximize space in the relatively small rear cargo space. Since the rear door is made up of a lower section that opens up from left to right, and a window that opens upward, accessing it is fairly easy. Also in fitting with the Wrangler’s mandate, the interior is pretty basic; it’s more geared for use out in the forest and in conditions more radical than what the average city driver has to confront.

So, you have to raise your leg up kind of high to get into the Wrangler. Once inside, you’ll find that the seats don’t offer lateral support like you might find in a sports car; we did however find the comfort level quite adequate during our test drive. In the back, the bench row of seating is more or less comfortable, and its relatively low position obliges occupants to keep their legs bent at the knees. This is less of an irritant, mind you, then the vehicle’s ergonomics and the placement of some of the controls. It takes a while to get habituated to the placement of the controls for the side windows, which are located directly under the screen display, smack in the centre of the dashboard (and not on the doors, where logic would dictate that they should be). It stops being an issue after a while, but expect to spend some annoying minutes looking for them.

The winter challenge
I have to admit to feeling some trepidation about driving a Jeep Wrangler in wintertime – not necessarily as concerns its driving performance, but more to do with its heating and de-icing capabilities and the effectiveness of the windshield wipers. But I was surprised, and pleasantly so: despite the intense cold that hit us for several days, we were warm and toasty in our Wrangler Unlimited. What’s more, even though our model did not include any lateral presence detection systems, the oversized rear-view mirrors provided a good view of what was behind us. On the other hand, macho reputation be damned, I would have appreciated a heated steering wheel!

The 3.6L Pentastar V6 engine is the only one available for the model, and it does the work admirably well, even though it proved somewhat gluttonous in using up fuel. The 5-speed automatic transmission was also effective while falling short of exceptional. Gear changes were as smooth as could be hoped for.

Because the Jeep Wrangler is designed for pretty extreme off-road driving, it uses circulating ball steering. This mechanical set-up lacks precision, but as a source of irritation it barely even registered. For the most part we drove in two-wheel-drive mode, and the traction it provided was good even with the snow and ice that occasionally covered the road. Fishtailing of the rear end was virtually non-existent.

When conditions worsened, we did switch to four-wheel drive; this is done by using a lever located to the left of the central console. Unfortunately, the lever is not well-identified, so the uninitiated may have trouble finding it. In fact I encountered some people who complained about the performance of their Wrangler, without realizing that they had been operating it solely in two-wheel drive mode. Perhaps they could have asked themselves what was with that seemingly pointless lever which actually activates the 4x4…

Conclusion
Overall the 2017 Jeep Wrangler Unlimited showed it was easily up to the task of winter driving, handling a range of different conditions without any hiccups. The precision of circulating ball steering has improved over the years so proved to be not a major concern, and the longer wheelbase of the Unlimited version ensured an adequate level of comfort for a vehicle whose suspension, lest we forget, is designed and tuned primarily for trails replete with ruts and obstacles. 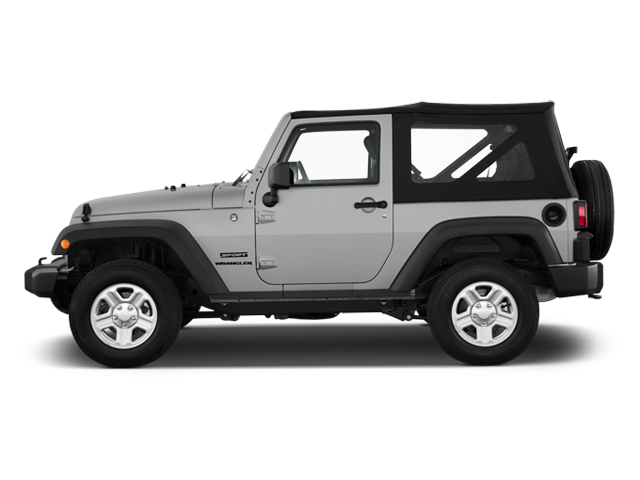 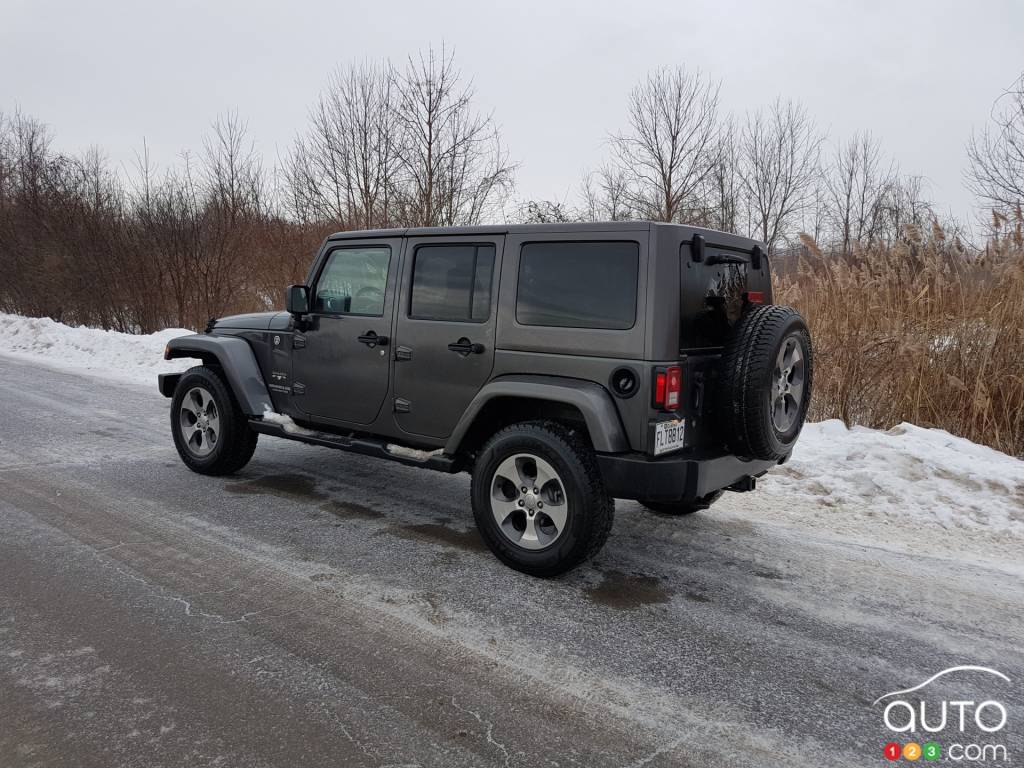 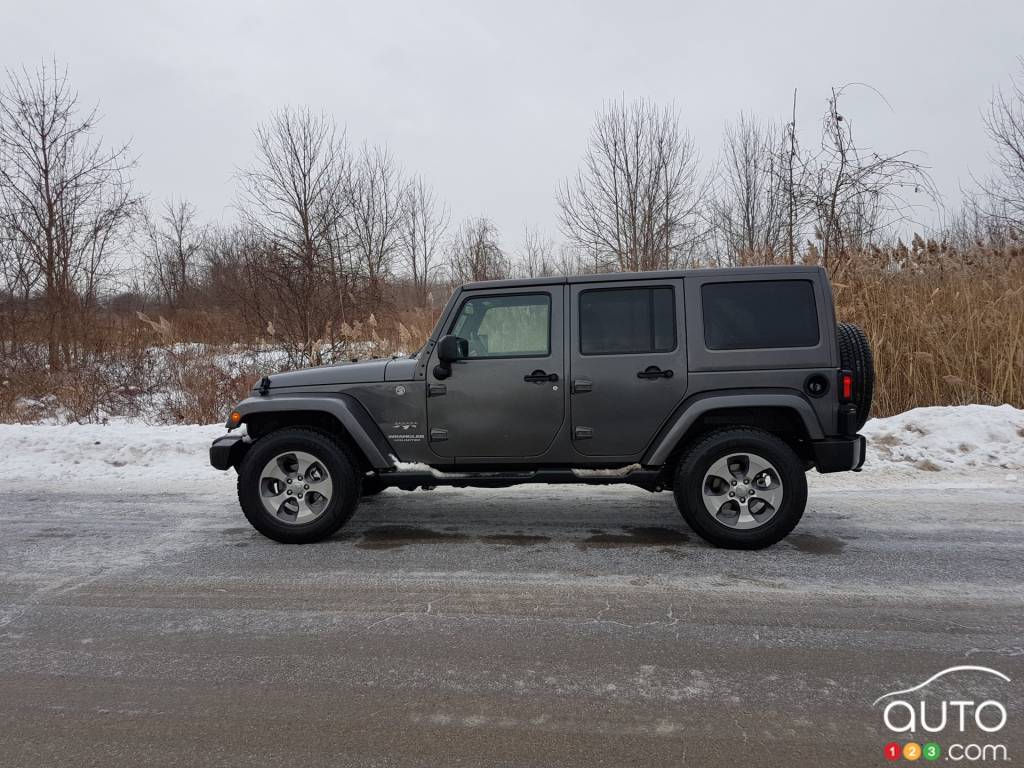 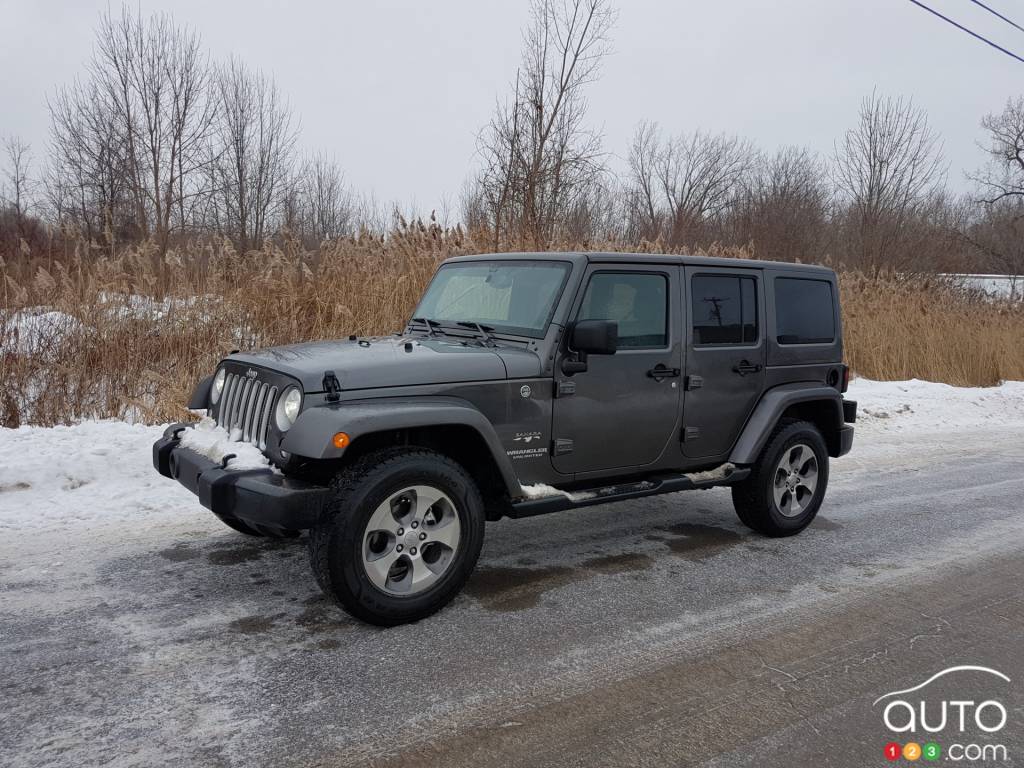 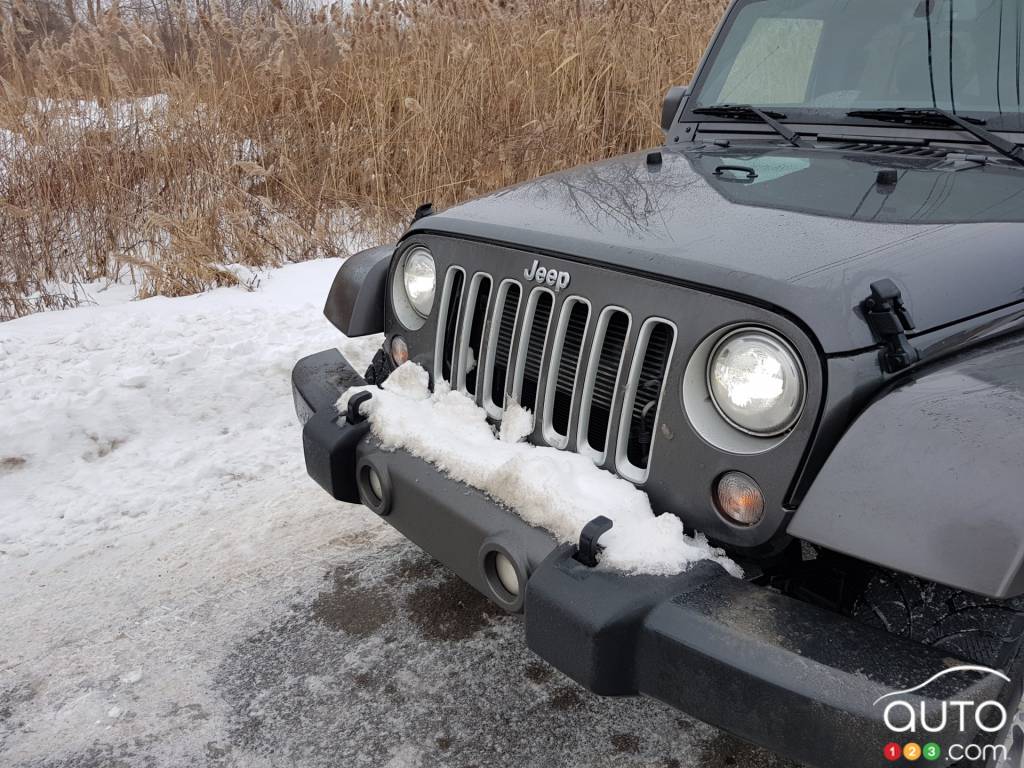