Now that Ford has begun rolling out its all-new, aluminum-bodied Expedition for the masses, it’s time we switch our focus to that model’s luxury variant, the Lincoln Navigator. Like the Expedition, it’s got an aluminum-alloy body as well as a single powertrain: a 3.5L EcoBoost turbo mated to a 10-speed automatic transmission and AWD. That’s your only choice in Canada; Americans get a RWD model. It’s available in two trims – Select (MSRP $87,500) and Reserve (MSRP $90,500) – each of which can be had in either short- or long-wheelbase form (long wheelbase models cost $90,500 and $93,500, respectively). The US gets an even more luxurious Black Label trim, but we’re not seeing that in Canada. Not yet, anyway.

Here’s the thing, though; when I sampled the Expedition in late 2017, it was so good that I actually found myself wondering what the heck the Navigator would do to move the chains enough to warrant earning luxury brand status, as well as a $3,651 price jump at base over the top-spec Expedition Max long wheelbase.

We travelled the gorgeous Sea-to-Sky Highway between Vancouver and Whistler, BC to find out.

Aluminum digs
As mentioned before, the Navigator now has an aluminum-alloy body. You can feel the weight savings as soon as you open the doors (and no; they aren’t of the gullwing variety as seen on the Navigator Concept at the 2016 New York Auto Show); they’re light to the point where I found myself slamming them overly hard on more than one occasion. The other place where you can really tell the difference is when lifting the hood. While only about 0.00006 per cent of eventual Navigator owners are going to do this more than twice a year, it does well to demonstrate just how much has changed after the switch to aluminum.

While it remains a little heavier than the Expedition, it still sets off from a standstill with gumption, even ferocity if you leave it in the “Excite” drive mode. Yes; “Excite” is the actual name, and it joins Conserve, Normal, 4x4 Auto Normal, Slippery, Deep Conditions and Slow Climb, all of which can be accessed by spinning the console-mounted wheel. As an added bonus, the gauge cluster changes depending on what mode you’re in; “Normal”, for example, leaves you with a single gauge – the speedometer – which is cool in that only the speed you’re going lights up as all the other numbers ‘round the speedo stay hidden. It’s a neat way of helping drivers focus on their speed. Then, when you switch to “4x4 Auto Normal”, you get a tach, too, so you can get a better look at what the powertrain’s up to. The fact that each switch is accompanied by a different hi-res graphic is icing on the cake.

You may wonder why I’m spending so much time discussing something as trivial as a gauge cluster, but I do so because it serves as a nice microcosm for how the Navigator is upping the ante in the luxury SUV game. There’s also a head-up display that’s wider than any I’ve seen previous, and what it shows (and where; it’s height-adjustable) can be adjusted though steering wheel-mounted buttons, which I rather like. The interior does well to echo the exterior styling, with its slab-ish-but-handsome door panels and hood, grille with illuminating Lincoln star logo and standard 22” rims, which get an even classier design if you select the Reserve model.

Seats fit for a king
Of course, that blingy stuff is all well and good, but at this level, you need to ensure that the occupants are comfortable, too. In the case of the Navigator, it starts with the multi-contour seats which are adjustable about a million ways from Sunday. There are Mercedes-esque door-mounted seat controls, yes, but that’s only half the story. The rest of the seat adjustments are made through the 10-inch infotainment display, which includes three different lumbar adjustments, two sets of side bolsters and if you’ve selected the optional Perfect Position seats, you get massaging seats up front, too. The second row, meanwhile, can slide forward and back but unfortunately, there’s no massage feature there. That may seem like an extraneous complaint, but when you’re buying a $100K luxury SUV, a massaging second row would be a nice option to have. Then again, Lincoln maintains that Navigator buyers are starting to lean more and more to the young family sector and what kind of child seat needs to be massaged, right?

Better you make the third row more easily accessed, which Lincoln has done by employing the same tilt-and-slide second-row seating seen in the Expedition. Now, you can leave a baby seat installed in the second row and are still able to access the third row. Which, as it happens, is surprisingly roomy and should have no trouble accommodating most adults, let alone the kids that are more likely to be sitting there. You get the same amount of room back there whether you’re in the long- or short-wheelbase model; the extra length only improves rear cargo space, to the tune of 3,407 litres of total space if you flatten both the second- and third-row seats, and 1,019 behind the third row. Short wheelbase models get a total of 2,929 litres, and 591 behind the third row.
Speaking of the kids: They’ll likely be impressed by the optional ($2,350) Lincoln Play rear seat entertainment system, which adds dual 10-inch tablet-like displays that can link with mobile devices and access video streaming apps such as Netflix. That’s a big plus, and up to 10 devices can be paired to the vehicle’s 4G LTE hotspot, or to one of the 12 (!) available USB ports, including two in the third row. If that’s not enough, wireless charging comes standard. The only caveat for the screens is that they’re not ­really of the “touch” variety; there’s a touch panel button bank at the base of each screen (as well as an Apple TV-lookalike remote), but that’s all.

The included headphones, however, do well to sound like a part of the fantastic Revel Audio system. Available in both 14- and 20-speaker configurations with three audio modes – Traditional, On-Stage and Audience – this is a very rich-sounding system that’s been developed from the get-go to work within the confines of the Navigator’s various door panels et cetera. It’s all controlled via the responsive SYNC3 touch screen that also has Apple CarPlay and Android Auto support. Still one of the best systems in the biz.

EcoBoost for all
The Navigator’s take on the 3.5L EcoBoost turbo V6 is good for 450 hp and a somewhat startling 510 lb-ft of torque, the latter available at 3,000 rpm. Forget the Ford Expedition; those are Ford Raptor figures, and more than what the heavier Cadillac Escalade makes. It does a good job of disguising the extra weight the Navigator has over its Ford cousin (which makes 375 hp and 470 lb-ft), especially at launch when the AWD grip, 10-speed auto (operated via buttons mounted in the bottom left quadrant of the centre stack; works rather well and looks the part) and boosted engine all come together in response to stomping your right foot. A car that looks this hefty and slab-like shouldn’t feel this light on its feet, but it does.

Helping the cause in the “athleticism” department is the standard adaptive suspension, which can change its settings on the fly depending on driver inputs and what’s going on beneath the vehicle. It takes a lot to keep a body like this in check, and these dampers do a good job – for the most part. The more aggressive turns will still lead to a little more body roll than I’d like to see, and you’d have to think the addition of some self-levelling air suspension would be nice to have. Alas, it’s not even an option for 2018, though we wouldn’t be surprised if we saw something like it for the ’19 model year.

One thing that doesn’t need any adjustment, really, is the way unwanted noises such as road noise or wind noise are metered out; all manner of electronic and engineering trickery such as noise-cancellation tech and double-laminated windshield and side glass has been employed to ensure the drive is as serene as possible, and they hit the bullseye. According to Lincoln, the Navigator has the quietest interior in its lineup.

In addition to electronic noise reduction and that great infotainment system, Lincoln offers pretty much any electronic driver aid you could ask for. If you’re willing to pay, that is. Blind spot warning, forward-sensing system and backup camera are all standard, but you have to pony up an extra $3,000 for the Tech Package, which provides lane-keep assist, adaptive cruise control with stop-and go, heads-up display and pre-collision assist. This is a vehicle that costs almost 90 grand at base; certain parts of that package – namely adaptive cruise and lane-keep assist – should come as standard. Even if you select the top-flight reserve trim, you have to pay to add that tech package.

Other additions include the $2,000 heavy-duty tow package, which provides trailer back-up assist (just twist a console-mounted dial as you back up your trailer, and the system does the rest) as well as 8,300-lb towing capacity with the short-wheelbase model, and 8,100 lbs for long-wheelbase Navigators. Non-heavy tow-equipped models get 6,200 lbs and 6,600 lbs, respectively.

Fully-realized
The bottom line is that with the Navigator, we’re being treated to yet another piece of fine engineering from Lincoln, which continues to ride the wave of momentum created by the MKC, MKX (renamed Nautilus for 2019) and Continental before this. The 2018 Navigator looks the part, it kept us in supreme comfort when, uh, navigating over some wintry mountain passes and it comes laden with tech, not to mention the fabulous 30-position seats.

Now, about those gullwing doors and that air suspension… 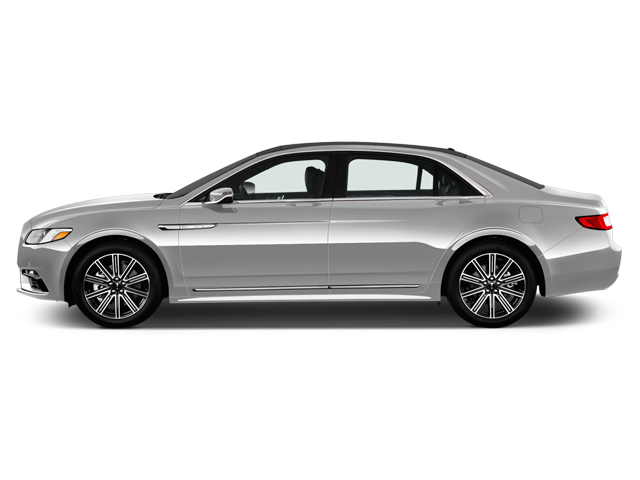 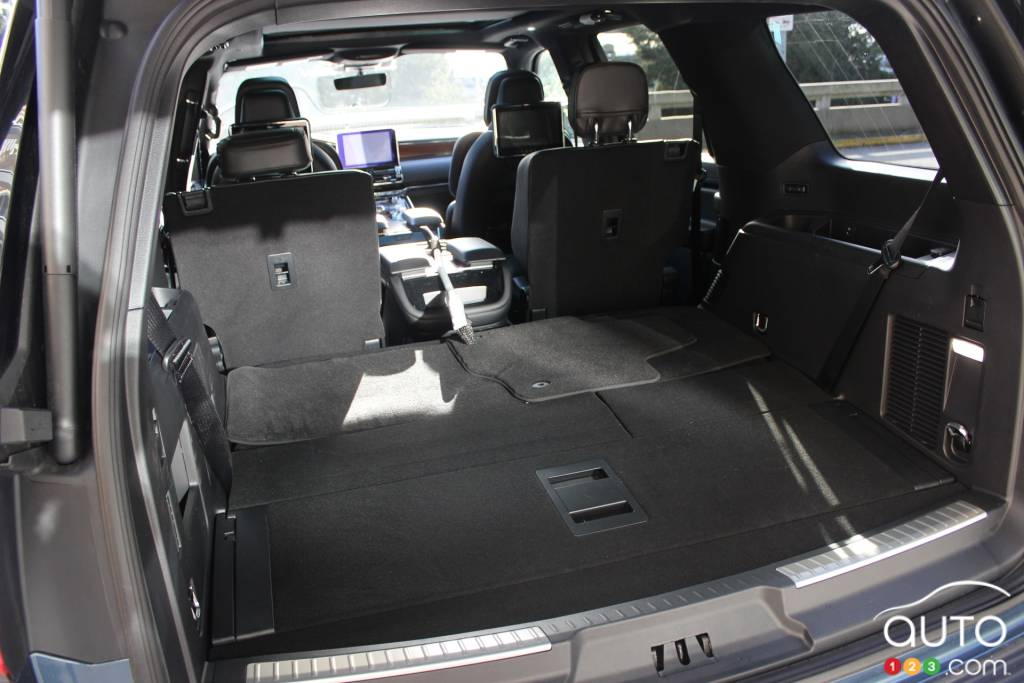 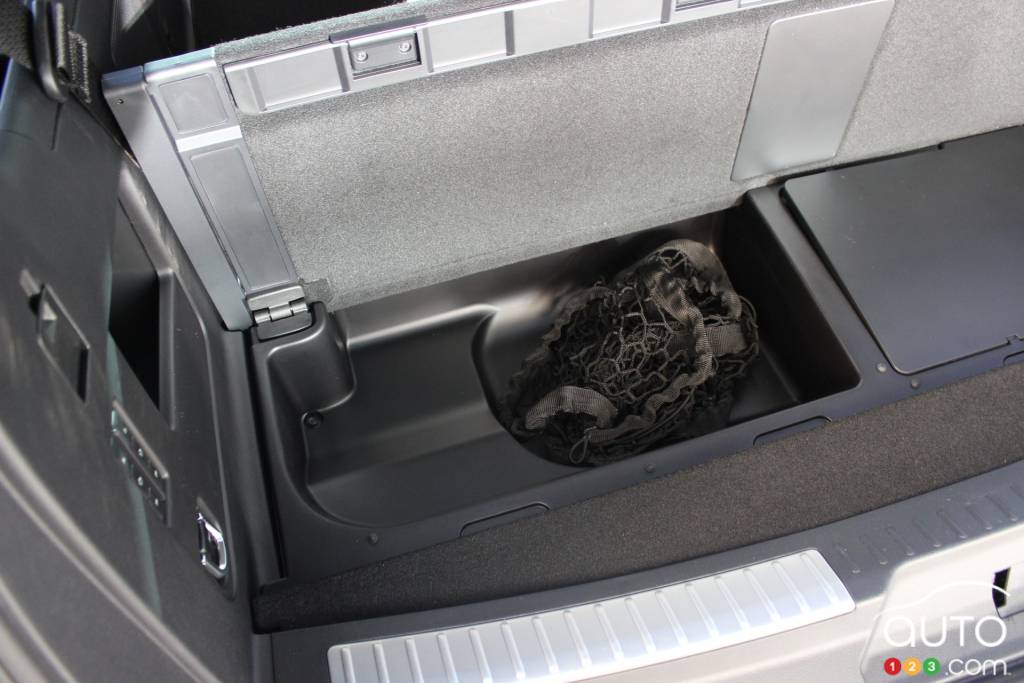 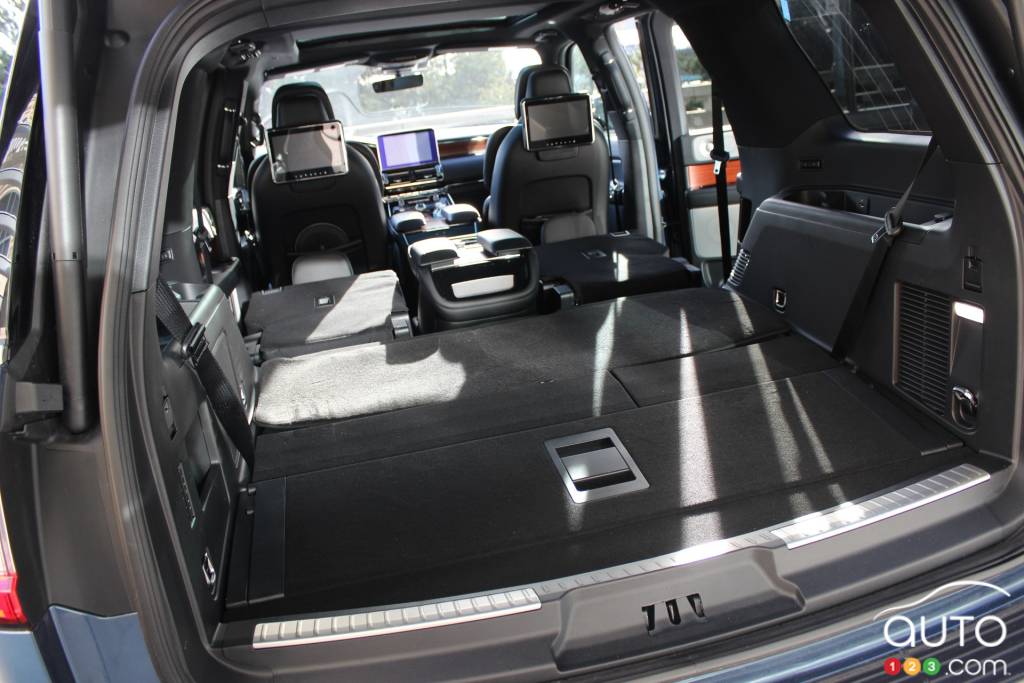 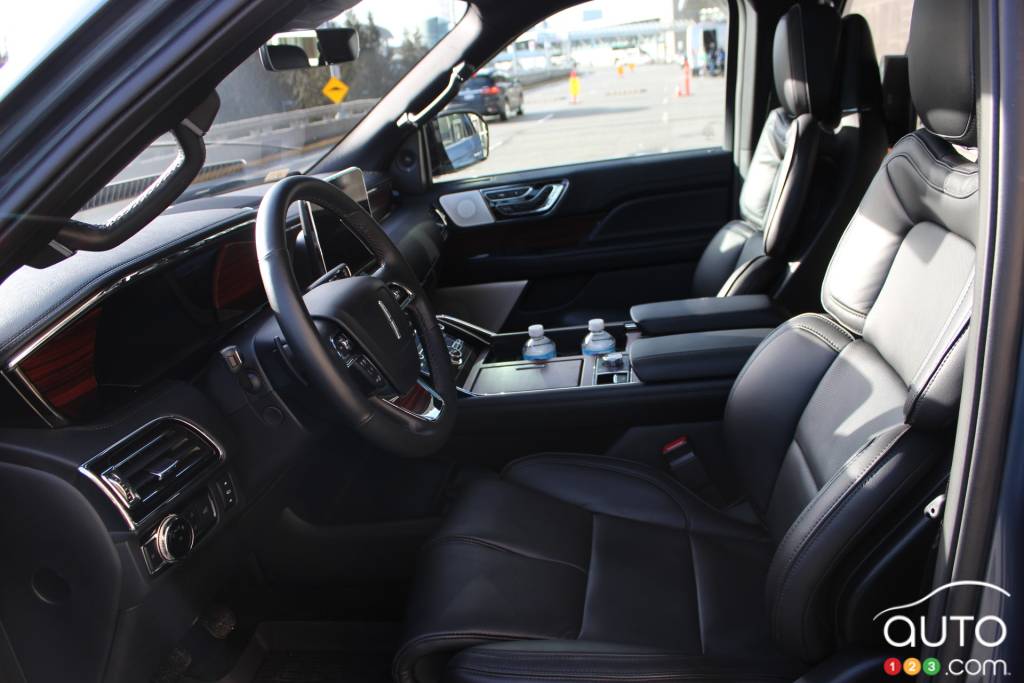 How to choose between the 2022 Cadillac Escalade and the 2022 Lincoln Navigator? We pit two pretty immodest vehicles against each other in a head-to-head bat...

The 2019 Lincoln Nautilus, which doesn’t try to out German the Germans but is all about interior comfort, good tech and sufficient power to get you where you...