When I was readying to write this review of the 2018 Volkswagen Golf Alltrack, I tried to recall when exactly was the last time a four-wheel drive wagon was available on the Canadian market. I had to go all the way back to the AMC Eagle, which went out of production in 1988, and the Toyota Corolla Wagon, which left us in 1992. For more than 25 years Canadian consumers have had to do without an all-wheel drive wagon, unless they have the means to fork over for an Audi or a Mercedes.

All of this to say that the Golf Alltrack is in an enviable position, that of being completely alone in its category. It reprises all the major elements of the Golf SportWagen, but with all-wheel drive added. Ground clearance is also higher, all the better to climb over large snow banks and to enjoy that feeling of dominating the road from a high driving position.

As it happens, during my week of testing the 2018 Alltrack all sorts of weather hell broke loose. Kind of like it’s been since winter began! On taking possession of the car I had taken note of the attractive alloy wheels, but as the week wore on their tendency to trap snow inside them grew annoying. Nothing’s perfect…

Only one version is offered by Volkswagen, and only a few choices are to be made. Buyers can choose the manual or automatic transmission, and there are two options packages – one with drive assist systems and the other a lights package that brings with it LED headlights. My tester featured both of them.

The interior was beige in colour; I found it worked wondrously well with the black dashboard. The design is unabashedly German, though somewhat less austere than it was a few years ago. The advantage of the relative simplicity, of course, is the ease of use that comes with it. The instrument cluster features two enormous dials for the speedometer and the tachymeter. Within the dials sit two smaller dials for cooling liquid temperature and for gas tank level. In the middle you’ll find the trip computer, which requires a slight learning curve to master. Fortunately I had tried another VW the week before. A bit of time and persistence, and you’ll get the info displayed that you want, for example the long-term average fuel consumption.

In the central console, under the A/C vents, the Alltrack incorporates a navigation system that, though pleasant to use, offers the same data as the portable Magellan GPS. What you get on there is far from precise outside of the larger urban areas, and it isn’t possible to modify it by creating an account with Garmin, Google or Waze. The best way to get a decent GPS is to plug in your smartphone and use Apple CarPlay or Android Auto. For the rest, the audio is by Fender, a well-known name of course in music circles. Sound quality is impressive; old-timers like me even get a CD player in the glove compartment!

Lower down are the commands for the automatic dual-zone climate control system. Using it is as easy as selecting the temperature and pressing on AUTO. Right there with them is the selector for the heated seats. The only missing is a heated steering wheel!  Lower still comes a small storage bin, within which are a USB and AUX input. The bin is kind of small to fit in the cable and your device, but I salute the thought. Finally, there’s a 12V plug near the gear selector, and another one in the storage compartment between the front seats. Two thumbs up!

I had no complaints about the comfort level of the seats. They could offer more lateral support, but as the car is not really sporty in its conception or capabilities, that’s not much of an issue. Space for hips, heads, legs and shoulders is all fine. Climb in back, though, and things are less rosy. The bench seat is comfortable enough, but legroom is just barely adequate, especially if the front-row occupants decide to slide their seats back. Given that the ideal target demographic is small families, the space provided in back is alright for younger children, but you might get grumbling from teens.

That back-row issue is a shame, because otherwise the cargo space is very well conceived. For example there’s the cargo cover, an item that is too often more annoying than useful. In the 2018 Golf Alltrack, it is fixed behind the rear bench, like in all models, except that it’s on rails. This makes it much more firm and easier to open or close. What’s more, when it’s pulled into place, you can place light objects on top of it. Ok the manufacturer probably doesn’t recommend doing that, but it is possible!

Overall cargo space is generous even when the 60/40 split rear bench is in place, and that bench is easily folded down using two pull-levers on the sides. There’s even a trap door that allows for fitting in long objects like skis without sacrificing all of the back seating space. Finally, I noted that the Fender audio system amplifier is located on the spare tire, under the floor of the trunk. Here’s hoping it isn’t too complicated getting that spare out if you get a flat tire.

The drive assist package adds a number of safety systems like blind spot detection, transversal traffic alert and lane keep assist, and it also includes adaptive cruise control. I was happy to see that the backup camera is offered as standard equipment, and that it doesn’t get dirty or snow-covered. How so? It’s actually installed beneath the VW badge on the back of the vehicle, and that badge only ‘opens’ when you have the car in reverse. Voilà, the camera stays clean.

The engine for the 2018 Volkswagen Golf Alltrack is a 1.8L 4-cylinder turbo bolted to a 6-speed DSG automatic transmission (or available manual gearbox). That DSG stands for Direct Shift Gearbox, one of the best automatics on the market. Changes are smooth and quick. Even the manual mode, not something I’m usually a fan of, is a pleasure to use with the DSG. Shifting is so quick that you’re surprised to see the needle of the tachymeter drop suddenly when moving from one gear to the next. As for the steering and the suspension, they are of high quality and make for a pleasant and smooth driving experience.

The attractive 2018 Volkswagen Golf Alltrack sits in an enviable position in the current automotive landscape. It is unique and serves as a viable alternative for families that are still allergic to SUVs. The cramped rear row is an issue, but the car has so many positives that this can be easily overlooked. 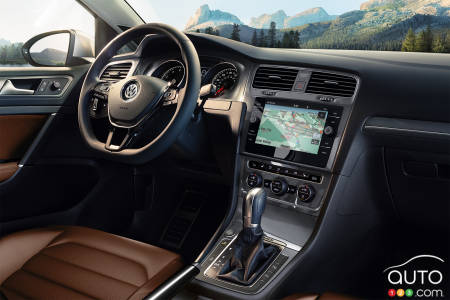 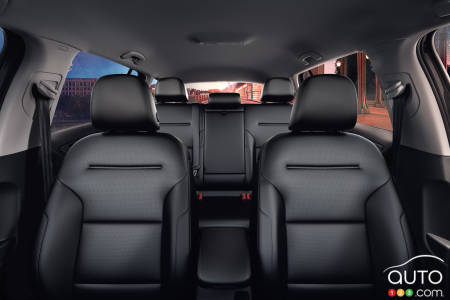 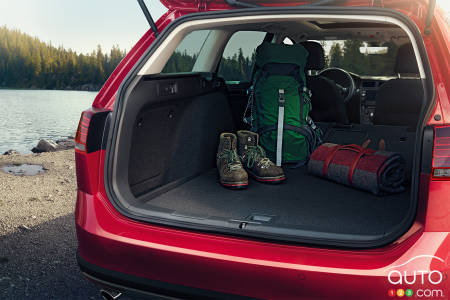 There are a number of reasons why this type of vehicle represents a strong choice, over and beyond the fact that wagons are significantly more fun to drive t... 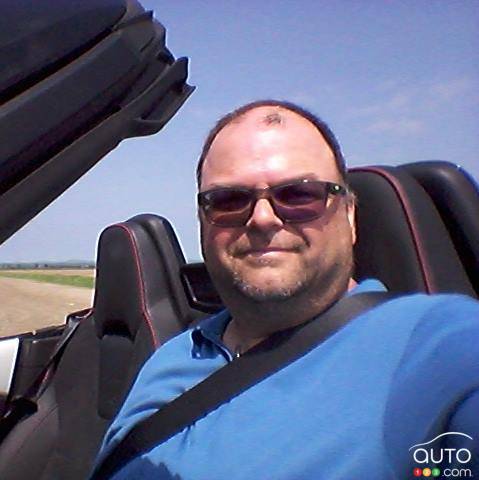