FARO, Portugal – If tradition is a concept never far from any conversation that involves Jaguar, it’s easy to forget that the history of this British brand is permeated with bold strokes and innovation.

Consider the Jaguar C-Type, victorious at the 24 Hours of Le Mans in 1953 and a pioneering user of disc brakes for automobiles. Or, how about the marvelous E-Type, which caused a sensation 10 years later thanks to its uncommon good looks, performance, road handling and level of technical refinement? All of this, offered at a quite astonishingly reasonable price for what was one of the best sports models of its era, and a future classic.

The Brits are at it again in 2018, as they introduce an electrically powered luxury crossover designed to stick it to the German manufacturers. While the latter are busily planning how to respond to Tesla, Jaguar, not exactly the wealthiest or most powerful player in the industry, introduces the most fearsome opponent to Elon Musk’s electric models: the new I-PACE.

Elegant and solid
Impossible to begin any discussion of the new model without commenting off the bat on its exceptional lines. A bit like the E Type, natch. The gorgeous contours are courtesy, once again, of Ian Callum and his team; the designer has been reinventing the styling of Jaguar models for nearly 20 years.

The structure and chassis of the I-PACE are 94% aluminum, and the rest is of high-strength steel. According to Jaguar, the monoshell body of the I-PACE is the firmest in its category, in terms of torsions. We believe it.

Its sleek and elongated silhouette, marked by curved wings and very short overhangs, was inspired by the fantastic C-X75 concept, first seen at the Paris auto show in 2010. The familiar front grille with its rounded rectangle is back and clearly establishes the car’s identity. It incorporates vents that open when the propulsion system needs cooling. When not needed, air flows over them and escapes via a large extractor carved into the hood for optimal aerodynamics.

To slice the air in all gentleness
The very low front end of the I-PACE, combined with a pair of side-view mirrors mounted on thin legs and side windows that stretch back far to the rear, translate into excellent front and side visibility. This virtue takes all its value when navigating the I-PACE on really narrow streets and winding roads, like we had for our first drive through the Algarve region of Portugal.

At the other end, the high-sitting, truncated rear section allows the I-PACE to make available 656 litres of cargo space, or 1,453 litres when the rear bench is folded down.

There’s also a tiny 27-litre trunk under the hood. The hatch is decked with an extra wing that directs air continuously across the rear window, which is coated with a waterproof film designed to eliminate the need for a wiper. We’ll see how that goes next winter...

Sharply inclined, that rear window provides but a very thin, elongated half-moon opening, which is also quite dark when viewed from the rearview mirror. But what’s amazing is how quickly you get used to it when you’re out on the road. Under the rear bumpers sits a functional extractor, like you find in big sports cars. All of these features combine to produce a very serviceable 0.29 coefficient of drag, which obviously helps extend range.

Classic and modern controls
The advanced interior of the I-PACE is apparently bigger than that of the large XJ sedan, even if its outer shell is that of a compact SUV. This is thanks to the absence of a combustion engine, but also to a wheelbase that is 18.3 cm longer than that of the Porsche Macan, for example. Space is abundant in front and generous in the back, with the added bonus in the latter area of a flat floor.

The front seats are wonderfully comfortable and a breeze to adjust. The driver’s position is well-conceived and proffers familiar-looking controls. Thank you Jaguar for continuing to believe in the virtues of ergonomic layouts and the pleasures of touching actual levers, buttons, knobs and switches. Those found in the I-PACE are resolutely modern and made of high-quality materials, in all trims. Also impeccable is the manually adjustable steering wheel, which combines leather and aluminum elements.

The dashboard is designed in sharp contrast with what you get in Tesla models, whose giant screens crowd out virtually all other commands; but it does feature two centrally placed touchscreens and one configurable horizontal screen for the driver. All of them are beautifully lit, by the way.

Operating most of the systems is intuitive, but things get tricky for certain settings that proved almost impossible to find among the multitude of integrated functions and systems. The central console is also a bit large and impedes on the space that should be reserved for the driver’s right leg.

Quick and silent
The long wheelbase provides a space for housing the 90 kWh lithium-ion battery under the floor, similarly to Teslas; in the process this lowers the car’s centre of gravity as well. Tucked into an aluminum casing that also helps increase structural rigidity, the battery delivers an optimal range of 386 km. Charging to 80% takes 40 minutes on a 100 kW station, while a full charge on a Level 2 (7 kW) station takes 12.9 hours.

A Jaguar-developed compact electric motor supplies 197 hp and 256 lb-ft of instant torque to each axle, ensuring at the same time optimal weight distribution between them. 0-100 km/h is officially doable in 4.8 seconds, and that seems very realistic. The I-PACE also easily attained 250 km/h on a straight line on the difficult track at Algarve. Overall it proved to be stable and predictable in its handling, without any pretensions at being a sports car.

Anyways it’s back on the road that it really shines, with its exemplary poise, balance and rigidity. These qualities made themselves manifest no matter what surface we took it over and what pace we kept. It also handled itself remarkably well on a pocked gravel road and on a sharply inclined trail. The only criticisms I could possibly make have to do with its steering, slightly disconnected from my touch, and its wide turning radius, no doubt the result of its long wheelbase.

At the wheel of the I-PACE, it’s easy to start wondering what purpose a combustion-engine luxury vehicle serves anymore. A non-stop drive down to Florida or Arizona, maybe? And even then. The first electric Jaguar makes you reconsider your old assumptions.

Canadian consumers will get their chance at the new Jaguar I-PACE towards the end of summer. Starting prices are $86,500 for the S version, $92,500 for the SE, $96,500 for the HSE and $103,500 for the LE or First Edition, which will be available without restriction. By the way, this model is nearly $80,000 less expensive than a Tesla Model X with similar power capabilities.

A spectacular electric crossover, far more affordable than its direct rival? Hmm, sounds a bit like the story of the E-Type. Whether it one day also ends up on display at the Museum of Modern Art in NYC, time will tell. 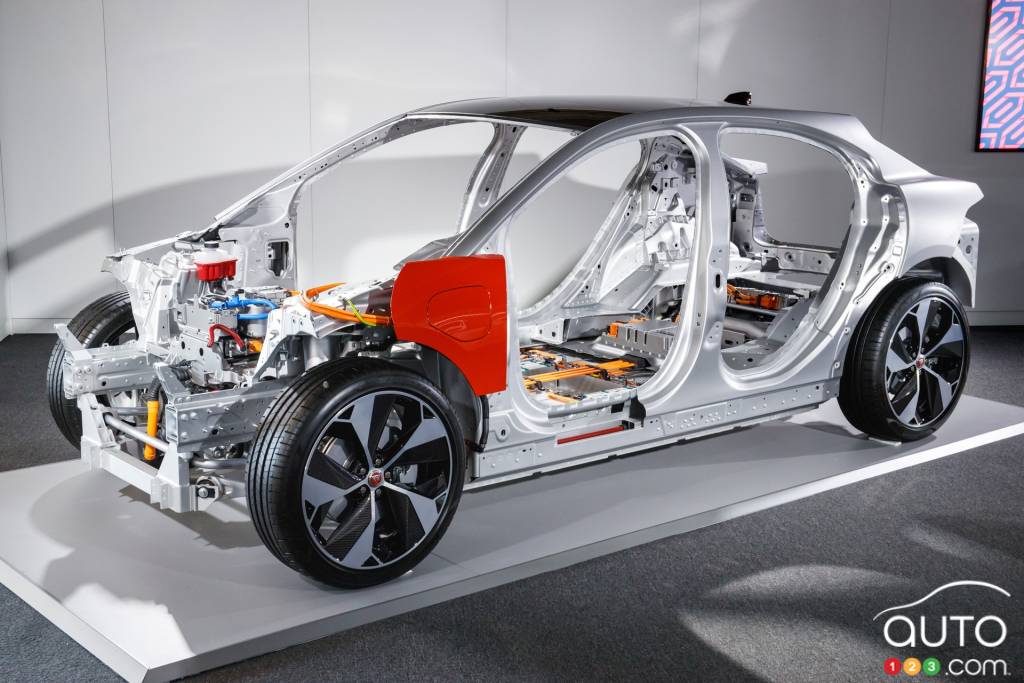 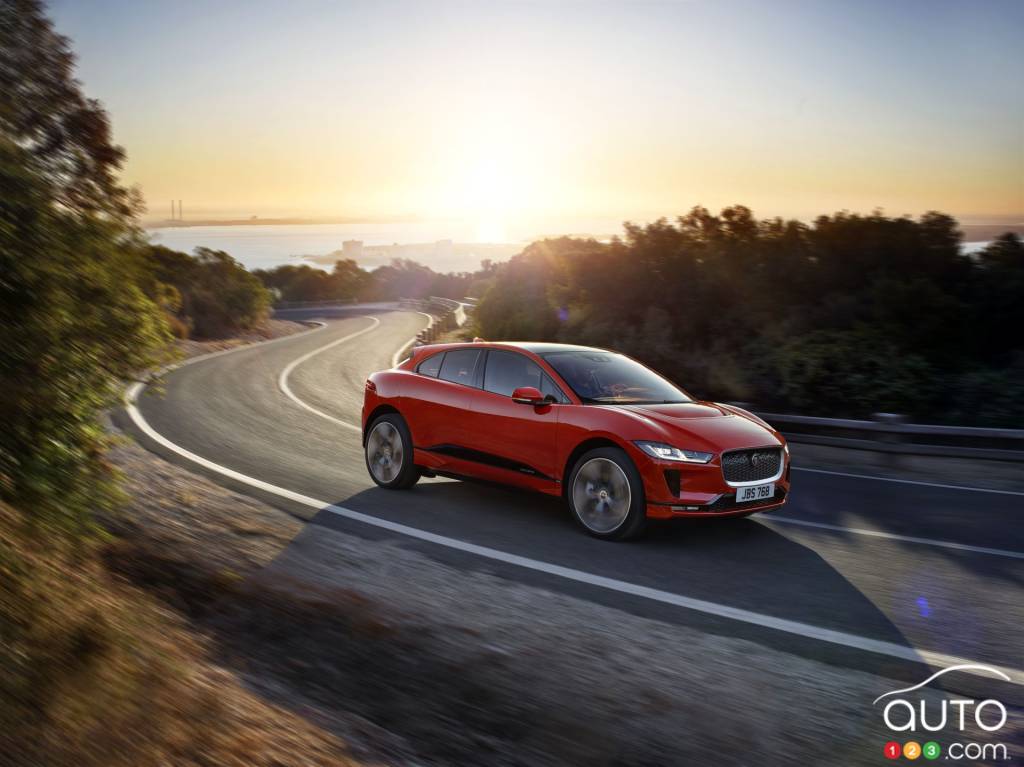 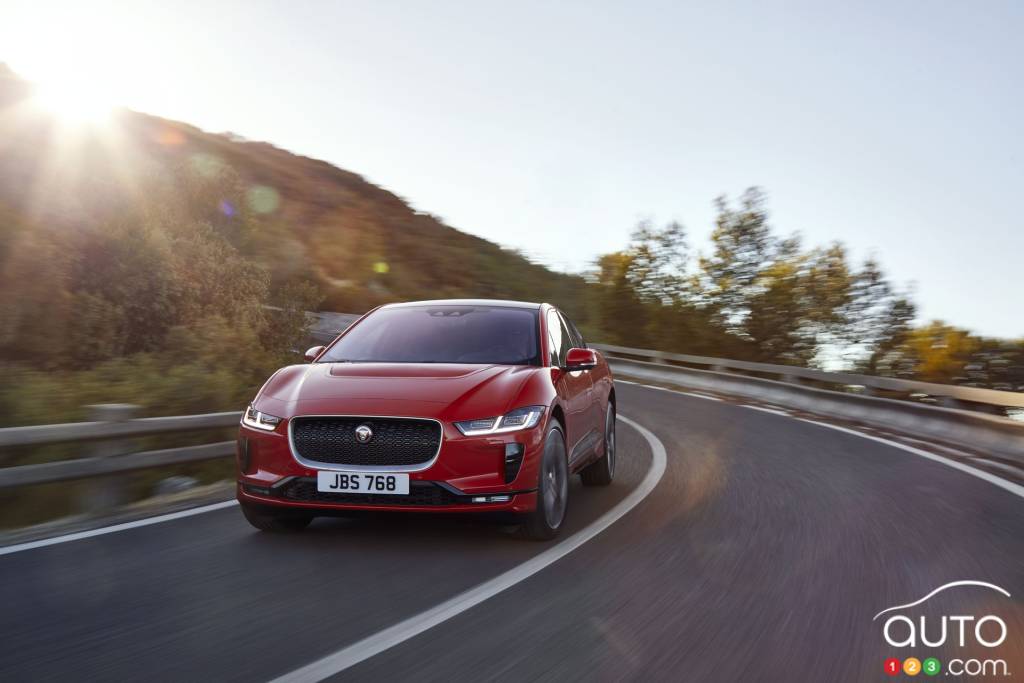 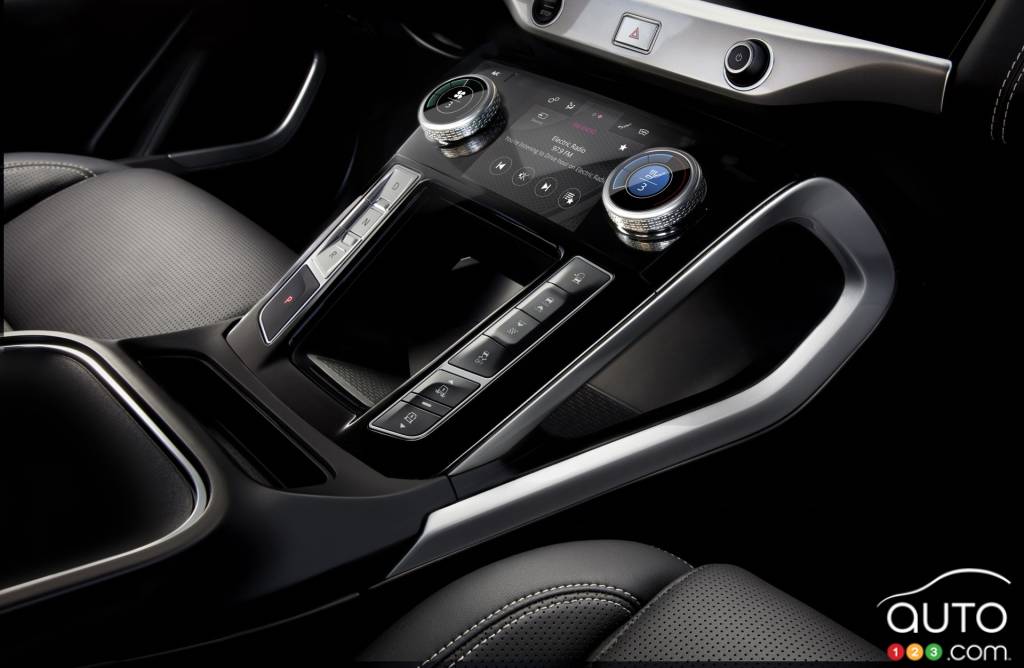 The highly anticipated 2019 Jaguar I-PACE was finally unveiled today on the web, ahead of its public debut in Geneva. Here’s your first look!