It’s unofficially MINI week at Auto123.com! We started with a trip back in time to one of the last, special-editions variants of the “original” MINI Cooper, which was produced until 2000. And yesterday we looked at the entry-level version of the model, the 2019 MINI Cooper 3-door. Today, the maxi MINI!

On the one hand, MINI as a brand has stayed remarkably true to tradition with its products over the years. On the other, it has been savvy enough to evolve while still riding the retro-nostalgic wave. Not a bad talent to have. This year, MINI rolls out the 2019 Countryman as a more spacious and adventurous creature than before. If, like us, you tend to think of crossovers as universally lacking in quickness and nervous power, the 2019 MINI Countryman John Cooper Works is here to change your mind.

Check out our review of the 1999 MINI Cooper Knightsbridge Edition

Check out our review of the 2019 MINI Cooper 3-door

All the basics
The 2019 edition of the maxiest of MINIs is more mature and more rugged than the rest of the clan. The look we know and love is still there, but it’s been combined with some sportier elements to give it more character.

Four versions of the Countryman are available; our tester was the John Cooper Works edition decked out in the optional Midnight Black package. So dressed up, the car carries a pain-inducing price tag, but if you’re willing to get past that this is a pretty seductive machine. 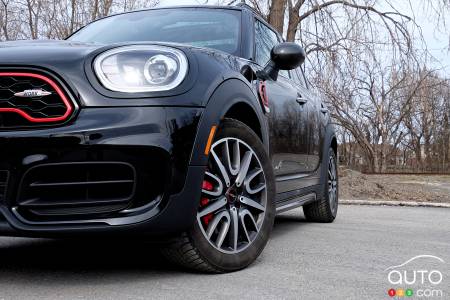 Outside, this version gets a metallic black finish, carbon side-view mirrors and piano black frames for the headlights, rear lights and front grille. If you’re OK with plonking down an extra $7,200 for the Midnight Black package, the result is a dramatic, even sublime look. But if you’re not, not to worry: it doesn’t add a thing to the performance of the car, so if that’s what really counts for you you can forego it and not be penalized.

Compared to the outgoing generation, the 2019 Countryman is longer by 200 mm, and its wheelbase it stretched by 75 mm. This puts it roughly on a par with small crossovers like the Subaru Crosstrek and the Honda HR-V. It’s also more aggressive-looking in general, particularly with the JCW’s 19-inch wheels shod with 225/50 tires that appeared to me a case of overkill. But hey, why not…

Inside, the MINI Countryman is quite well equipped – especially if you go for the Midnight Black package. Overall comfort is good and you get heated sport seats, a sunroof and JCW-exclusive steering wheel and gear shifter. 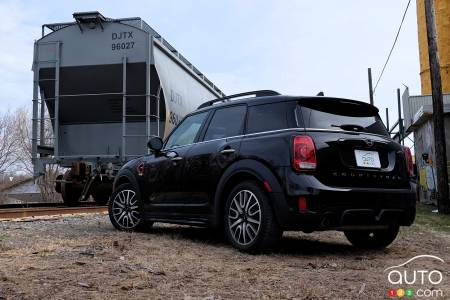 Another impossible-to-ignore feature is the panoply of typically MINI circular elements, most notably the round 8.8-inch screen (the regular Countryman gets a standard 6.5-inch screen) with its light-up halo. While that last element certainly looks cool, it adds nothing to the functionality of the screen. In fact the buttons and lettering on that screen are smaller because of the screen’s shape, making for a more complicated user experience.

You can, if you prefer, control the screen menus using a rotating knob (BMW’s iDrive knob, transplanted) from the central console, though access to it is slightly encumbered by the armrest. It seems as if BMW’s expertise in ergonomics has not totally migrated to its MINI division…

One new feature we’re very about it is the presence of Apple CarPlay, giving access to your smartphone functions without having to plug it in.

We also loved the nifty retro switches for some functions instead of buttons, which we’ve already seen in other MINI vehicles. A great little touch, that. There’s also the high-quality harmon/kardon audio system that enhances the in-cabin experience.

In its base iteration, the Countryman doesn’t come with a ton of drive assist systems, though you do get rear parking assist, automatic high beams, rear parking sensors and of course the requisite backup camera.

For more, you’ll have to dig around in the options to get things like a head-up display, front parking sensors, park assist, adaptive cruise control and collision warning. 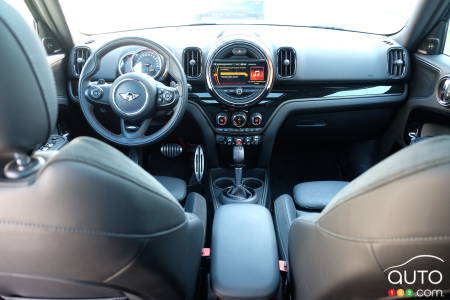 One of the bigger surprises that awaited us with the 2019 Countryman was the impressive amount of headroom and legroom in the second row of seats, in good part of course due to the car’s boxy overall shape. Not that there’s a ton of space back there, but it’s more than what we’re used to getting from MINI. We’d say it’s the minimum required for a family of four.

The centre of the back row folds down and becomes an armrest in which are integrated cup holders and an electrical outlet.

Cargo space is also more generous than before, and in fact it’s greater than what you get in the Clubman. Regular cargo capacity is 450 litres, and that climbs to 1,390 litres with the seats folded down. That still places the Countryman pretty far behind rivals like the Honda HR-V, mind you.

The mechanics
The JCW version bestows on the MINI Countryman all the power it needs or could reasonably handle, with its powertrain delivering 228 hp and 258 lb-ft of torque. All models run on a 2.0L 4-cylinder engine along with the ALL4 all-wheel-drive system. The 8-speed automatic transmission is an option if you don’t want the standard 6-speed manual.

Taking into account the performance capacities of the model, these numbers aren’t mind-blowing, in fact they’re a bit disappointing. But if frugality at the pump counts for you, there’s that aforementioned hybrid version to consider. 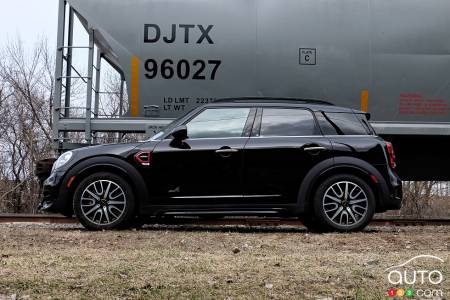 Fun on the road, but your body may come to hate the suspension
This MINI is almost the polar opposite of boring on the road; it’s a joy to drive, and we suspect that would be even more so in the snow!

Slip into Sport mode, and the car becomes even more responsive and even louder in its proclamations of enthusiasm when you push the engine. At times we almost thought it too loud, in fact, and no doubt there’s some exhaust sound enhancement piped in to the cabin artificially just to drive the point home. Anyways, it’s sure to please many if not all owners.

The transmission is pretty adept at finding the right gear at the right moment, and do it quickly and smoothly. But then there’s the sport suspension, which is really well-suited to the track but a bit hard on the body in daily driving, especially on our Canadian roads. Be that as it may, we spent most of our week in Sport mode, because what’s a little soreness in exchange for more sportiness?

Hard to find much fault with the all-wheel-drive system, however. Given the model and the brand’s BMW connections, we don’t doubt that the car would perform admirably in the winter months. 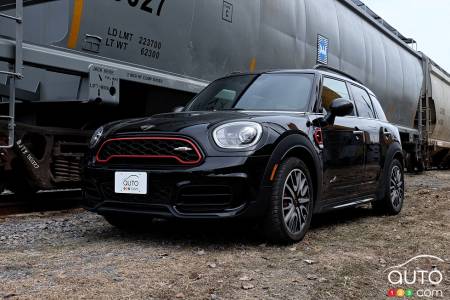 Raw power is decent but it’s not the model’s forte. Those expecting explosions of brute power will be disappointed, but initial acceleration is very sprightly and the car is very nimble on curves.

Overall, the MINI Countryman offers a unique and positive driving experience. While it’s the biggest MINI in the lineup, it’s still a small vehicle that’s great to manoeuvre in traffic and easy to park in tight spaces. What this is, is a great alternative choice for those with allergies to family SUVs and minivans.

Pricing
The John Cooper Works edition we drove comes stickered at $39,790, to which you have to add $7,200 more for the Midnight Edition package.

It’s true that for these prices you can find yourself a more practical vehicle, but chances are that vehicle won’t have the unique personality that is the MINI’s big strength. We admire what MINI has done with its Countryman, that they’ve produced a car with the required basic functions, more space and decent power. 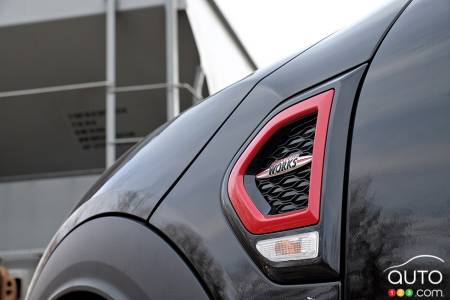 Every you need is there, more or less, and the bonus is that it will conquer the hearts of MINI lovers while offering more versatility, enough anyways to accommodate small families. If you want a traditional people mover and are worried about budget, well, then the list of alternative choices is long..

It’s the most spacious MINI
Sport mode delivers an excellent driving experience
The base model’s price is, all things considered, reasonable

The suspension that in Sport mode will make itself felt
The options lead to a hefty price tag, and the hybrid version is expensive as well
It could do with more standard features 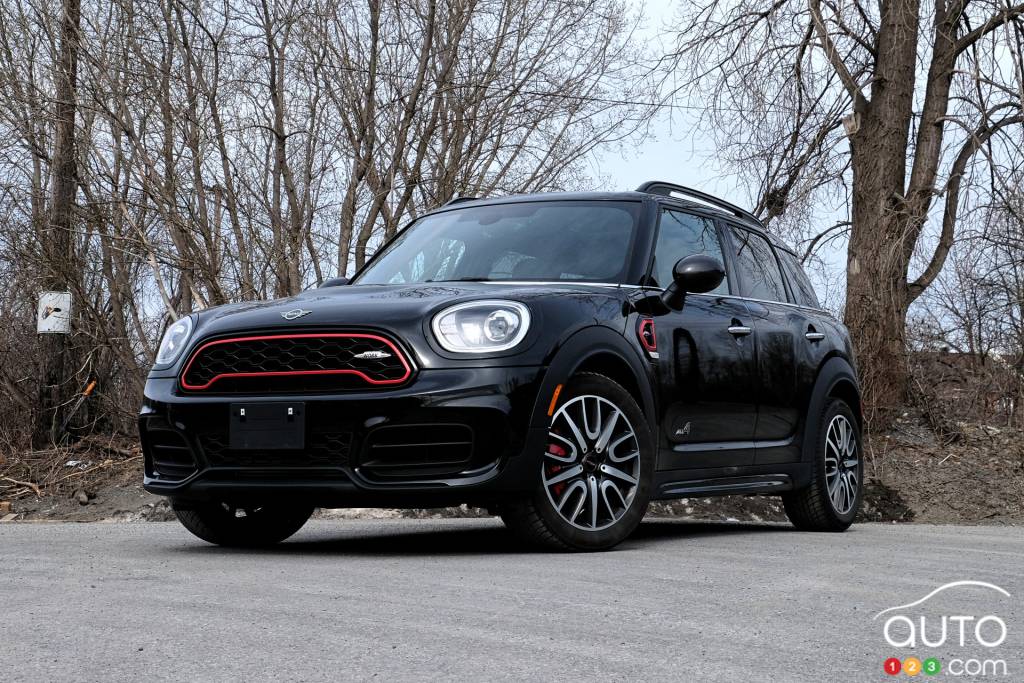 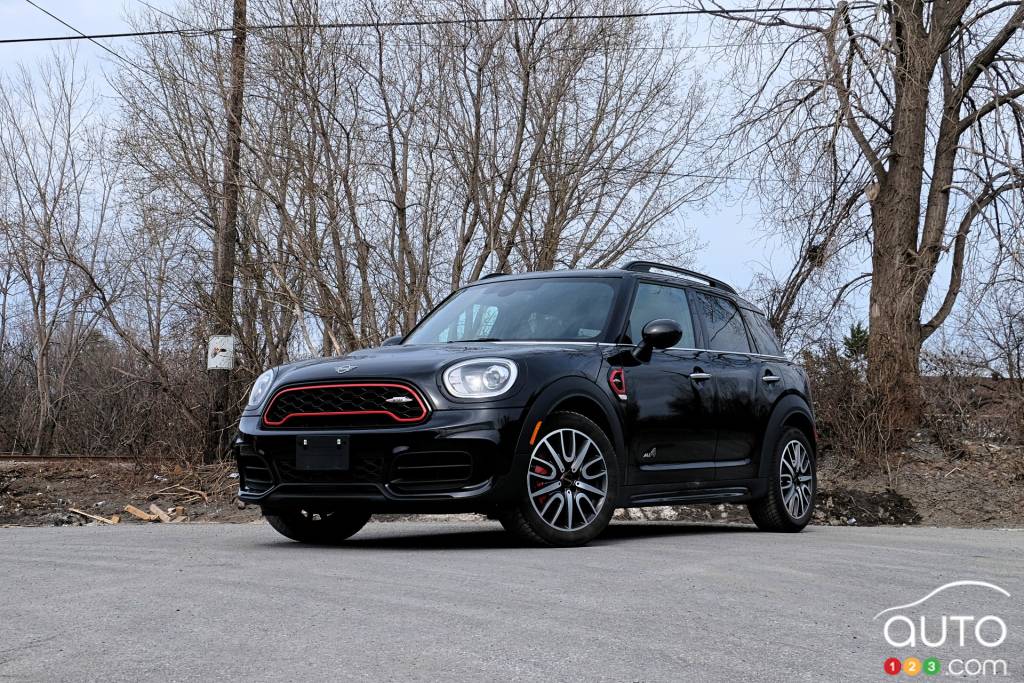 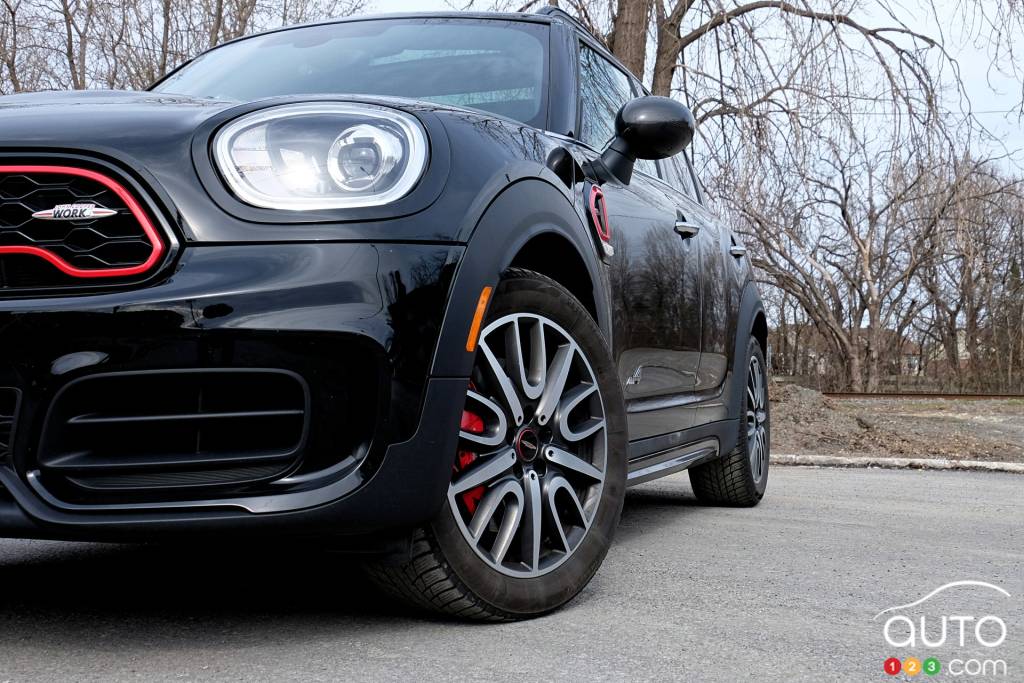 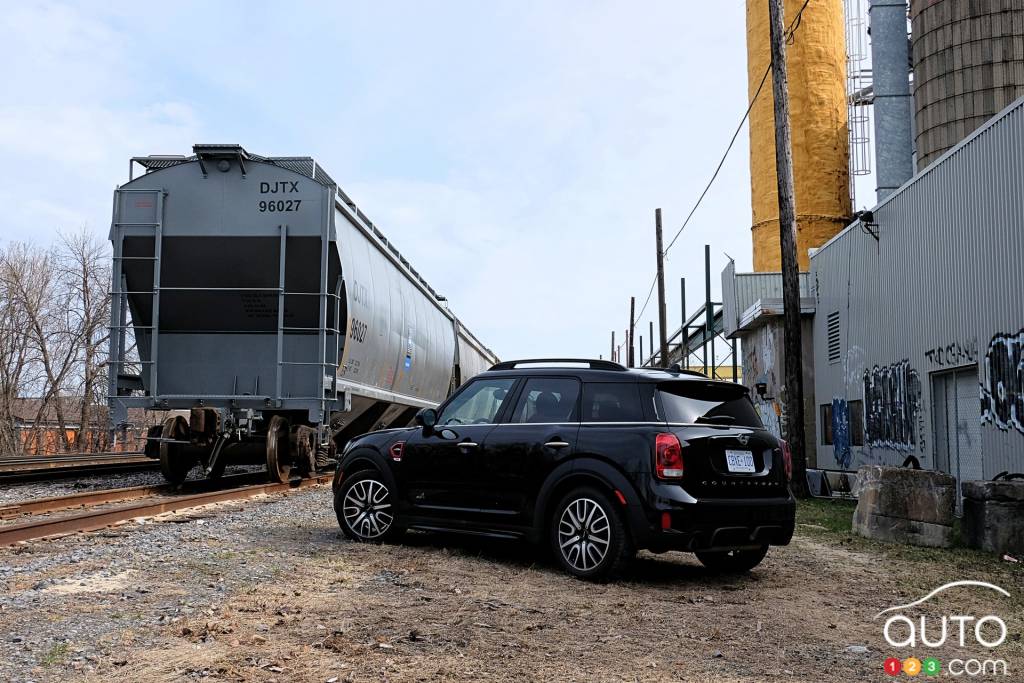