It’s unofficially MINI week at Auto123.com! Yesterday we started with a trip back in time to one of the last, special-editions variants of the “original” MINI Cooper, which was produced until 2000. Now we look at the entry-level version of the model, the 2019 MINI Cooper 3-door.

The MINI Cooper is renowned for the near-endless ways to customize and tailor it to the tastes of the owner. But those who practice some self-discipline when checking off the options and accessories will be gifted a purified driving experience by the 2019 MINI Cooper 3-door.

This is the base version for the MINI Cooper, the entry point into a brand that has gone high-end over the years, in contrast to its humble origins as a car of the people. It also provides access to the manual-transmission driving experience for beginners.

Check out our review of the 1999 MINI Cooper Knightsbridge Edition

The MINI Cooper 3-door is one of those little pleasures in life that will bring a smile to your face, if not quite goosebumps to your skin. This version is a near-bare bones car, supplemented with a few (basic) pieces of equipment and features.

Specifications of the 2019 MINI Cooper 3-door 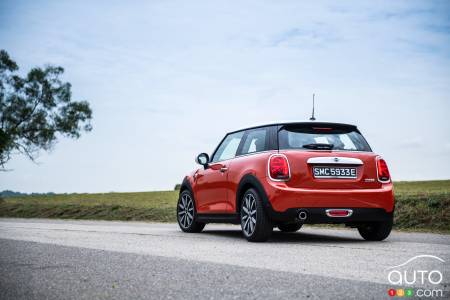 Impressive? Not really. Cool? Absolutely!
There’s little on the outside of the MINI Cooper that’s likely to blow anyone’s socks off. There are no standard LED lights, no extravagant alloy wheels. How can MINI pitch its new 2019 Cooper? Well, there’s a new logo this year, 15-inch black wheels, a choice of black or white roof, and… that’s about it. And yet, despite the car’s simplicity – or maybe because of it – the Cooper is more distinct and noticeable than many of the rivals competing in its price range.

It is possible to complicate things a little, mind you. For $1,300, buyers can get the Classic package with panoramic roof, 16-inch alloy wheels, heated front seats, anti-fog lights or coal-black leatherette seating.

Keep in mind that by simple we don’t mean low-end. The interior is nothing complicated, true, but it’s still relatively high end, and everything or almost is well-conceived. Those leatherette seats offer good comfort, and the leather-wrapped steering wheel is pleasant to the grip.

The “almost” comes in the form of the central console armrest, which is cumbersome and actually gets in the way of the driver’s elbow as much as anything. I would have liked to see it placed lower, or begone altogether to be honest. 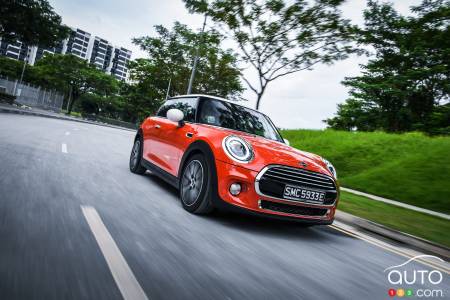 Some might bemoan the spartan feel of the cabin environment, with its plastic elements placed here and there. But it’s maybe unrealistic to expect more from this basic little bug. The presentation is cool and that’s what counts for fans of the MINI Cooper, after all.

Surprisingly, space available to those consigned to the back row of seats is really generous. Of course this is relative. Don’t go sticking your grandparents or big linebackers back there. But that’s not really in the MINI Cooper’s mandate anyways. This is car that’s geared to single folks or couples without kids. Those with offspring will most likely opt for the MINI Cooper five-seater, slightly higher up the price scale.

Tech
And how about the technologies to meet the wants and needs of that young hipster dude, dudette or couple at the core of the MINI Cooper 3-door demographic? The imposing circular dashboard includes a 6.5-inch multimedia screen, which can be switched out for an 8.8-inch screen for a little extra cash. Like in BMW products, the knob used to operate it is ergonomic and thankfully not frustration-inducing. But also like in BMWs, Apple CarPlay and Android Auto compatibility is not included standard.

Otherwise, you do find certain elements specific to the MINI brand, like switches instead of traditional buttons. Gimmicky they might be, but I actually got a big kick out of them, and they’re super easy to use. Overall, these and other touches make you permanently aware you’re in a MINI and no other. 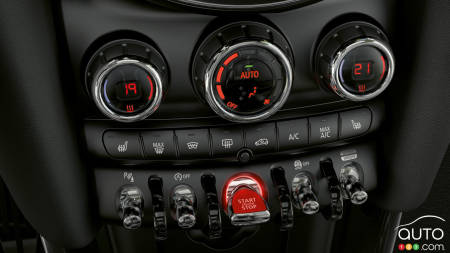 The Cooper 3-door might be comparatively bare-bones, but it comes with several welcome standard functions, for instance Bluetooth connectivity, remote starter and rear parking sensors.

On the other hand, no automatic climate control, which means adjusting the settings manually as you go. Oh how quickly we get used to new fineries…

The mechanics
The MINI Cooper comes with a 1.5L turbo engine, wedded by default to a 6-speed manual gearbox. This unit delivers 134 hp and 162 lb-ft of torque – more than enough to enjoy your little toy. Especially as it take the car from a stop to 100 km/h in a respectable 7.8 seconds.

The higher-end version like the Cooper S and the John Cooper Works (JCW) are fitted with a 2.0L turbo engine.

That manual transmission ensures hours of fun
This entry-level MINI Cooper is an excellent handler on the road. The short wheelbase has a lot to do with, and so does the stiffness of the chassis. Sportiness doesn’t always require a ton of horses under the hood. 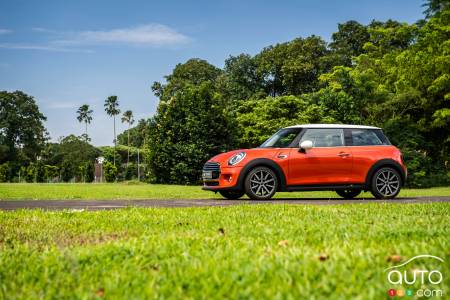 The manual gearbox is quick and precise in its functioning, as is the gear pedal, easily controlled without undue leg pressure. A real pleasure to have on board, it is, and drivers will likely never tire of running up and down the gears to maximize the performance of the MINI.

An indicator on the instrument cluster tells you what gear you’re in and will even suggest when it’s time to shift up or down. The car doesn’t stall easily and the shifts happen smoothly rather than abruptly. This is perfectly suited to newbies who want to master the art of driving with a stick shift.

If you really want to put this MINI to the test, take it out in snowy weather. You’ll get a pretty idea of its superb handling.

If there’s a caveat with this little ray of automotive sunshine, it’s that there’s no Sport mode. Which is a shame for a car that drives like a glorified go-kart. Of course you could argue that the default mode is Sport mode… 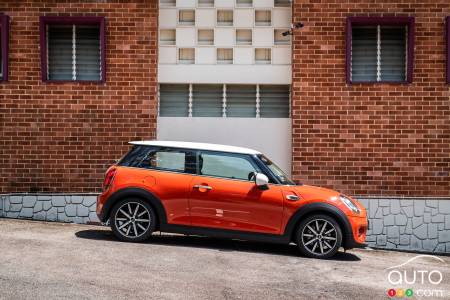 Now, it’s hard to argue with a starting price of $23,090. For that you don’t get a ton of bling, but you do get the brand image and an exceptional driving experience. That said, a cold and logical comparison with competitors may find it lacking in terms of interior space and functionalities for the price exacted.

But that’s if you’re being cold and logical. The MINI Cooper delivers simplicity and emotion, which garners it a ton of points that are hard to quantify on paper. This car takes direct aim at those who have no desire for unnecessary flourishes, and who want a user-friendly stick shift.