Mont-Tremblant, QC - It’s been yakked about for months, even years, but now it’s finally here: 2020 marks the big return of the Supra. Even better, it marks the big return of Toyota. The Japanese brand has been much-criticized over the past two decades for the soporific designs of its cars. Reliable as Toyotas are, they also tend to be yawn-inducing.

And yet, a look at the history of the brand shows it has known how to do create models with verve and flair. There was of course the 80s-90s era Supra, but let’s not forget the 2000GT, a classic model produced in the late 60s and worth a small fortune today.

It’s good news then to see Toyota show signs it wants to rekindle some of that design magic, in fact it’s excellent news. The signs have actually been there for a few years now, as we saw the creation of the Scion FR-S, today the Toyota 86. As for the Supra, the origins of its return trace back to Detroit, in 2014. 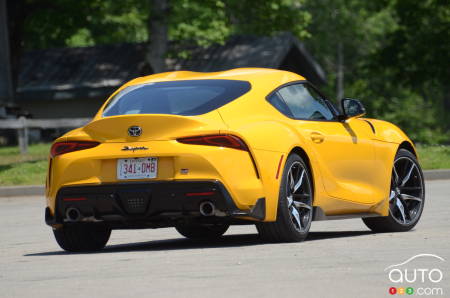 From prototype to production model
Not all prototypes make it to the assemble line, of course, but it has been so in the case of the concept car first shown at the Detroit auto show in January of 2014. The FT-1 design study foreshadowed the return of a sports car to the Toyota lineup. And from the day that concept was presented, the Supra name floated in the air.

Then there was the alliance between Toyota and BMW, the first details of which certainly set tongues wagging.

In the end, the final version of the revived Supra stuck closely to the concept presented in 2014 – to the delight of many, because the design is certainly gorgeous. This car is a head-turner if there ever was one, and its look is an accurate reflection of the design philosophy behind it, called Waku Doki (which translates roughly as ‘emotion’). 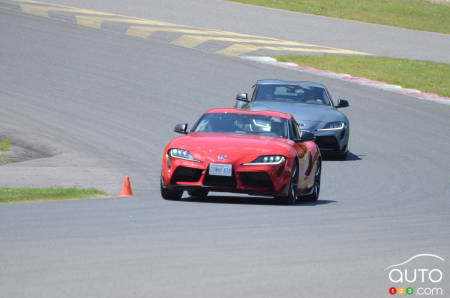 A single version
The product offering is a simple affair, the model being offered in exactly one version, called the GR Supra. GR stands for Gazoo Racing, a performance division set up by the manufacturer to focus on racing. The new coupe thus delivered with Michelin Pilot Super Sport tires developed especially for it. The wheels are 19 inches and they dress up the car marvellously.

There are seven different colour choices, though four of them are variations of grey, black or white. Yet it seems to me that with a car like this, the idea is to draw eyeballs and leave an impression. I’d be likely to go for a vibrant blue, red or yellow.

A BMW?
The Supra, in case you didn’t know, was developed by Toyota conjointly with BMW. This deal made sense for both parties, in that the Japanese automaker wanted to bring back its iconic sports coupe, while BMW was looking for some way to finance the creation of a new-generation Z4.

Toyota explains that in fact the chassis was developed in partnership between the two companies, but from then on it was each brand for themselves. That said, the interior, the mechanics and transmission of the Supra are German transplants. 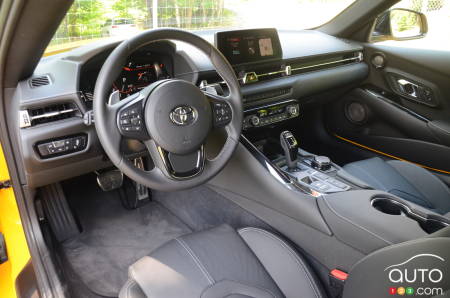 So sit inside this Toyota and you recognize the BMW-ness of it, especially the steering wheel, central console, multimedia system and switches. More distinct are the instrument displays, however.

Unsurprisingly, it’s a pretty restricted space you’re in, especially if you’re of the taller variety. On top of that, the environment is quite dark, so claustrophobes may want to think twice about this model. The trunk can take in a few suitcases, and you can actually slide in some longer objects between the bucket seats. Want to do a longer road trip in the Supra? It is possible, but you’ll have to keep the stuff you bring with you to a minimum.

Speaking of the seats, they’re properly enveloping and can be adjusted 14 ways, including by inflating the lateral portions for a more body-hugging fit.

There are carbon-fibre accents on the console, which is a nice touch. Right by the driver’s right knee Toyota added padding to protect it when you’re on the track. A nice way for the Supra to remind you of its DNA. 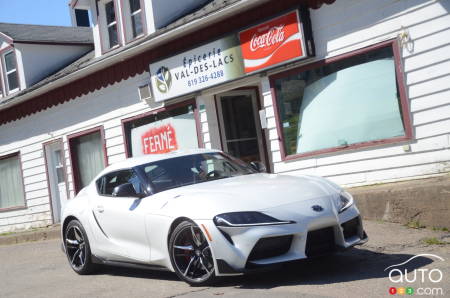 A Toyota?
The first part of our day of discovery involved taking the Supra out on the road. A nice surprise for us was to discover how comfortable the car is to travel in. And when you want to make things edgier, you can activate the Sport mode to change the settings of several components. In this respect, we take our hats off to Toyota for a job well done.

And for having driven the Z4, I can tell you that one of the most interesting discoveries of driving the Supra was to see how the models do drive differently. Yes, one is a convertible and the other coupe, but still. The differences go deeper than that.

Toyota managed to personalize its Supra, which in my view was a necessary first hurdle to clear if the reborn sports car is to succeed.

The heart
The organ at the core of the Supra is BMW’s celebrated 3.0L inline-6 engine. It employs 24 valves and a single double-volute turbocharger. Output is 335 hp between 5,000 and 6,500 RPM, and frankly it feels like there’s 50 more coming at you. Maximum torque meanwhile is 365 lb-ft, available starting at 1,600 RPM. 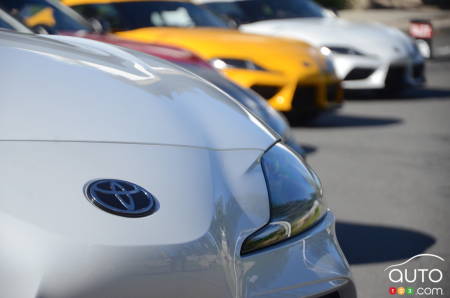 Working with this mill is a ZF 8-speed automatic transmission. Paddle shifter on the wheel are included as standard equipment, but that’s as close as you get to a manual gearbox; don’t bother looking for a stick shift in the product offering. BMW doesn’t offer one, so there you go I guess. Toyota gave us the sense that it really would have liked to offer one, but it just wasn’t possible…

On the track
Our day of testing also included a short session on the track of the Mont-Tremblant circuit. This served first of all to confirm the impressions we’d gotten while out on area roads, namely that the steering is super-crisp, the braking effective with its four-piston Brembo calipers in front, and overall balance exceptional thanks to the 50-50 weight distribution of the car.

The only real surprise was the articulations we could feel from the suspension elements, which were more prominent than expected even when in Sport mode. It’s rather negligible, really, but you don’t feel quite the same assurance as you do in a Porsche, for example. That said, the chassis does great work and even when you’re over-aggressive in taking a corner, it reassures. You never feel like you’re losing control. 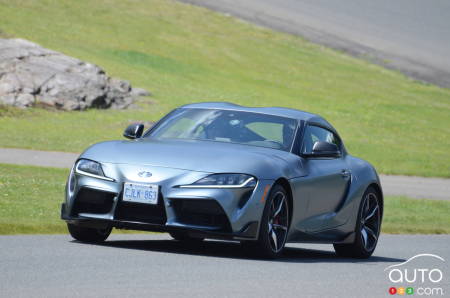 Conclusion
With a Supra that delivers a convincing - a distinct – drive, Toyota checks off the required boxes for the model to succeed – as does BMW with its Z4, by the by. The car is a quality product, delivers emotion in spades and delivers exclusivity to those who buy it, for now at least. And that’s because Toyota intends to deliver all of 300 units of the Supra to Canada between now and the end of 2019, with the expectation that will double to 600 in 2020. Depending on how well the model does once on the market, those numbers could of course increase. Let’s say Toyota is in analysis mode right now to see how the future unfolds. 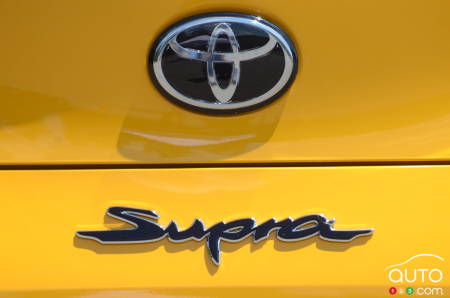 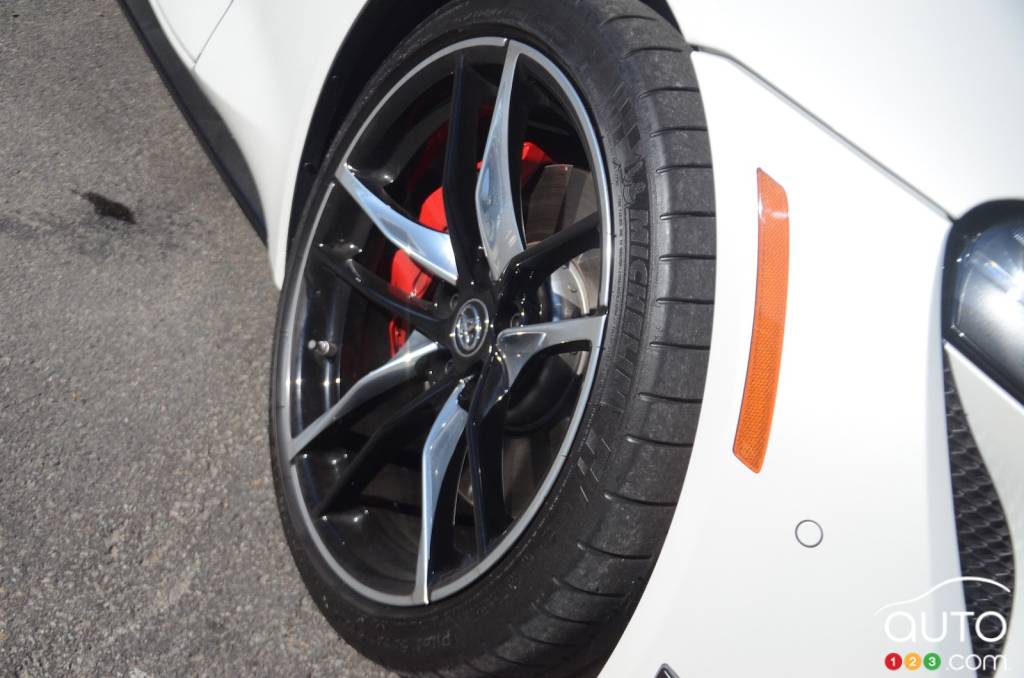 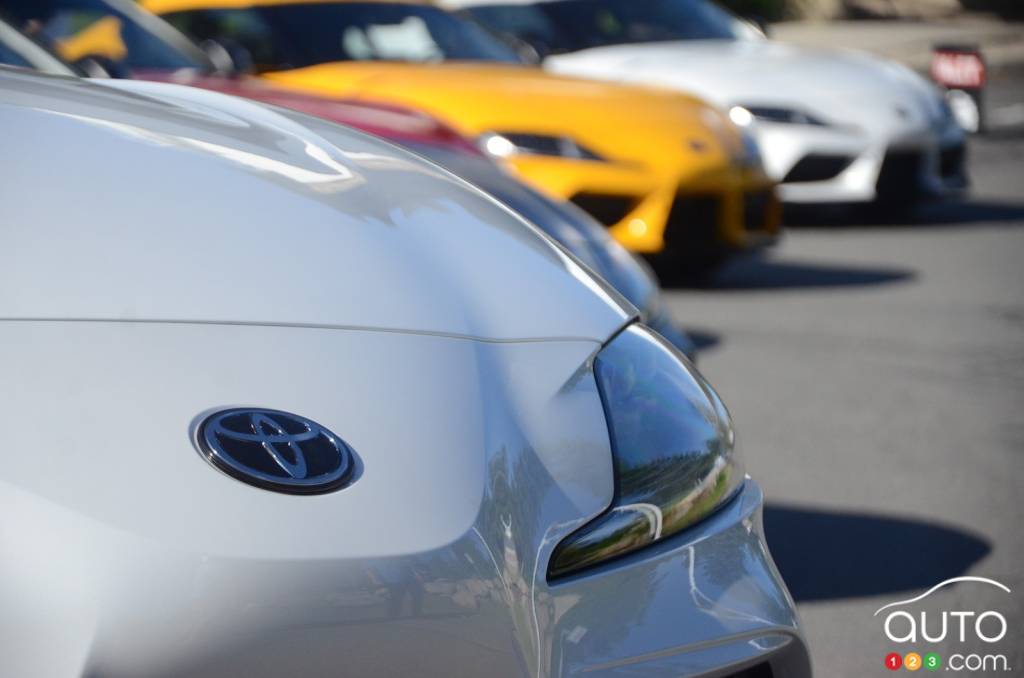 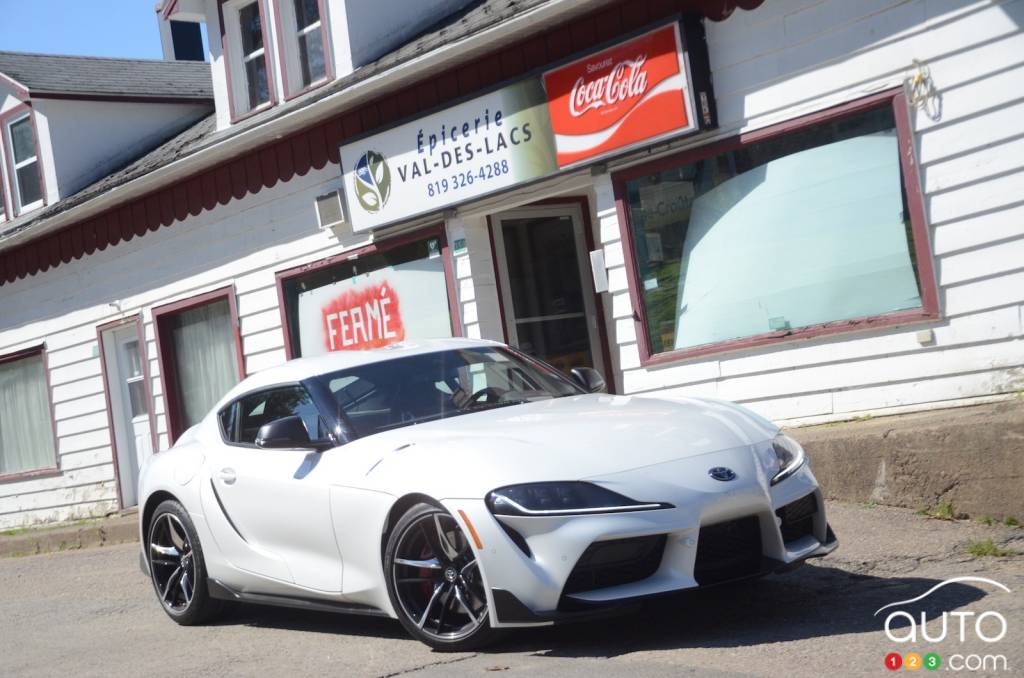 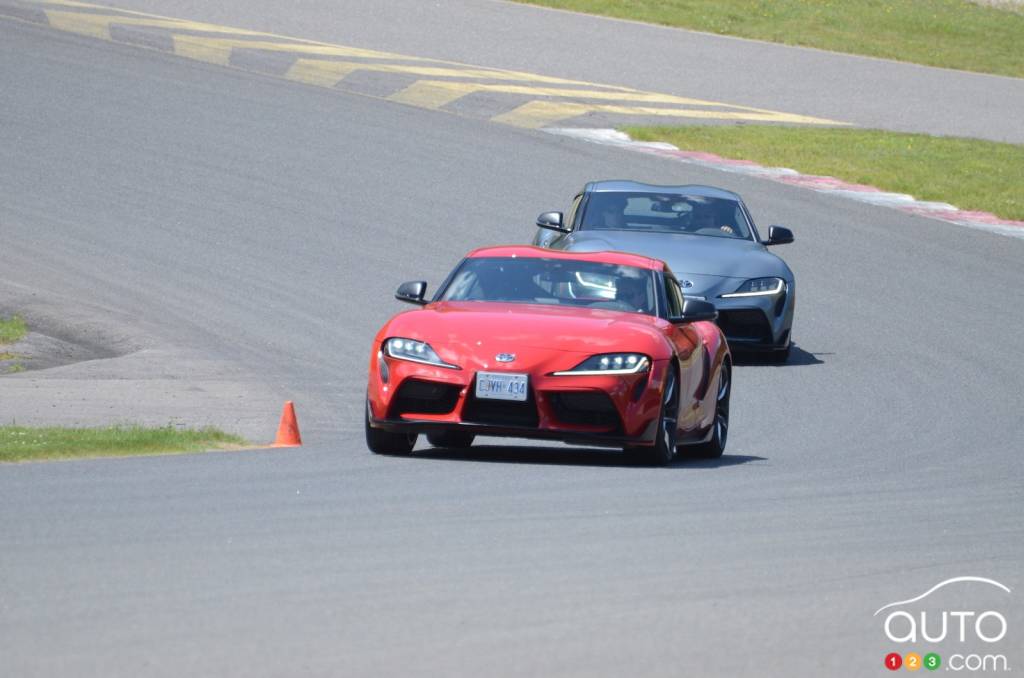