One of the little pleasures of my job is to watch people's reactions to the vehicle I’m driving  in a particular week. Sure, that’s a no-brainer and an ego-stroke when I'm driving an exotic car, in which case eyes are drawn to it like moths to a flame. But when I get behind the wheel of a new model that's more accessible to the average person, it's very informative to see heads turn as I drive by or pull up at a light - or not.

Reactions from pedestrians, cyclists or other motorists constitute, in my opinion, a great way to determine whether a car's design catches the eye. The occasion presented itself to me a few times during the week I spent at the wheel of the Bavarian automaker’s entry-level model, the 2020 BMW 228i xDrive.

The curiosity I noted regarding this compact sedan confirms that there is indeed interest - positive or negative - in the new 2 Series Gran Coupe, which joins the coupe/cabriolet duo in BMW’s 2 Series lineup. Unlike Mercedes-Benz (A-Class and CLA-Class) and Audi (with the A3 lineup), BMW offered only a 2 Series (preceded by the 1 Series until 2014) designed for the loyal brand purists. The new 2 Series is based on a platform designed for front-wheel-drive vehicles, while the "old" 2 Series sends torque to the rear wheels first. But times in the car domain are, as they say, tough, so the Bavarian manufacturer is looking to broaden its audience with the new Series 2 Gran Coupe.

Pretty or not?
Frankly, BMW is a little late to the segment of entry-level sedans; the Gran Coupe has to compete with a very full Mercedes-Benz lineup as well as the Audi A3, available with three different engines. The 228i’s two German rivals have very similar silhouettes to the other cars in their respective divisions, while the 2 Series looks almost like a BMW X4 that shrank in the wash. Unfortunately, the practicality of the X4 - or even of the 4 Series Gran Coupe - has been sacrificed in this configuration; the 2-Series lacks a tailgate for loading bulky items.

But what about the look of this little beemer? Because of the smaller dimensions of the platform, the 2 Series Gran Coupe doesn't look as stretched as the other models bearing the designation. The bumper is particularly loaded, with the sharp LED headlights and that massive grille. The same can be said of the rear end, where the slimmed-down taillights are joined by a black stripe tattooed with the BMW badge in the middle. Thanks to the optional 19-inch wheels, the 228i xDrive is actually closer to the car format, with the tires filling the wheel arches very nicely.

You don't buy it for the interior volume
Like its segment rivals, the 2 Series Gran Coupe is not a model of expansiveness inside. There's enough room in the front row for two adults, especially ones used to a compact car! In the back things are a little dodgier, mainly because of the bulky panoramic roof. The head on top of my five-foot-nine frame touched the ceiling when sitting back there. Clearly, despite the 60/40-split rear seat, and even though the trunk floor can be lowered, the 2 Series Gran Coupe won't win any prizes for the number of litres of whatever it can hold.

However, I did like the dashboard, which features a central touchscreen that's virtually integrated with the instrument gauge. The screen proved to be very responsive in this edition, a feat made possible by this 7.0 version of the iDrive system. I also tip my hat to the induction charging pad, which even comes with a clip to hold your smartphone in place when you want to have a little fun on a winding road… I mean closed track.

So what about driving pleasure?
About that fun. The different architecture between the two types of 2 Series does impact the sedan's handling. The coupe/cabriolet tandem tends to make the car over-steer, but in this variant, you can feel the weight resting on the front wheels. Okay, it's true, all 2 Series Gran Coupe models get the in-house all-wheel drive, better known as xDrive, but the essence of the sedan has nothing to do with the coupe or cabriolet.

And yet, this base version - BMW also markets an M235i xDrive equipped with a 301-hp 4-cylinder turbocharged engine - is a pleasant and agile bug to drive every day. The steering is heavy and precise, the suspension is firm (a little too firm even) and the 2.0L turbocharged engine does delivers 228 hp, all via an 8-speed automatic transmission, the same one used all over the place in BMW's lineup. Accelerations are frank, though you’Re not at the level of madness of the superior model, and fuel consumption is reasonable. In fact, I averaged just over 10L/100 km, and even that was due to the enthusiasm I displayed while driving it.

Conclusion
In the end, the most cherished quality associated with BMW, driving pleasure, is still plenty in evidence, but here it’s got a special flavour. While the coupe/cabriolet duo banks on the old formula, the 2 Series Gran Coupe falls more into the territory of the MINI division. I couldn’t avoid the feeling I was driving a MINI Countryman S, although it’s also evident BMW’s engineers were able to make their adjustments to make of this little car a true Beemer. 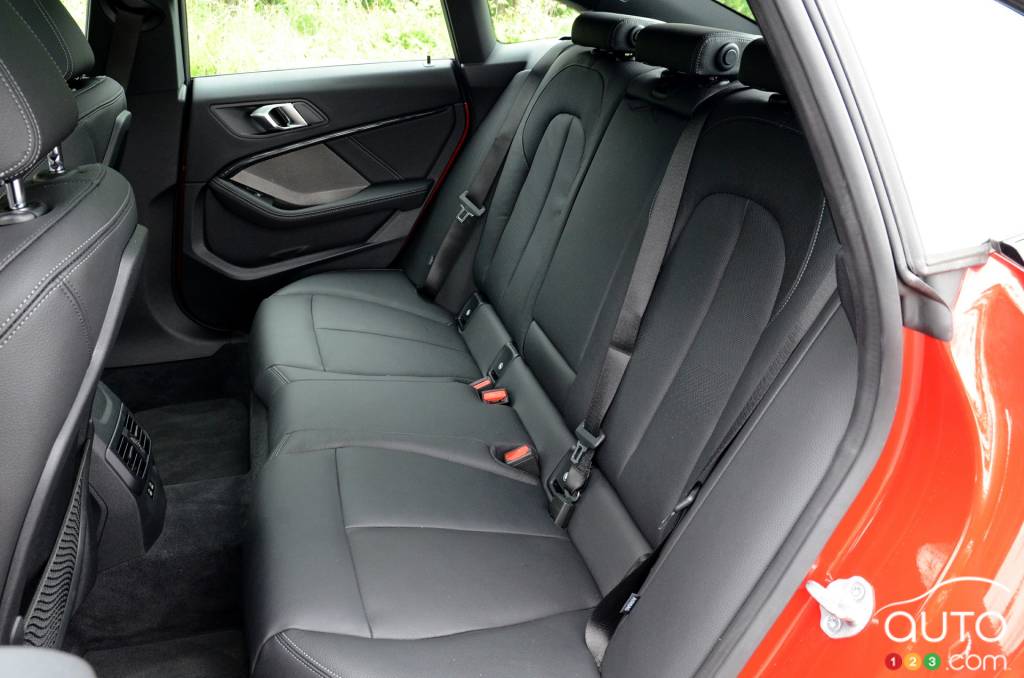 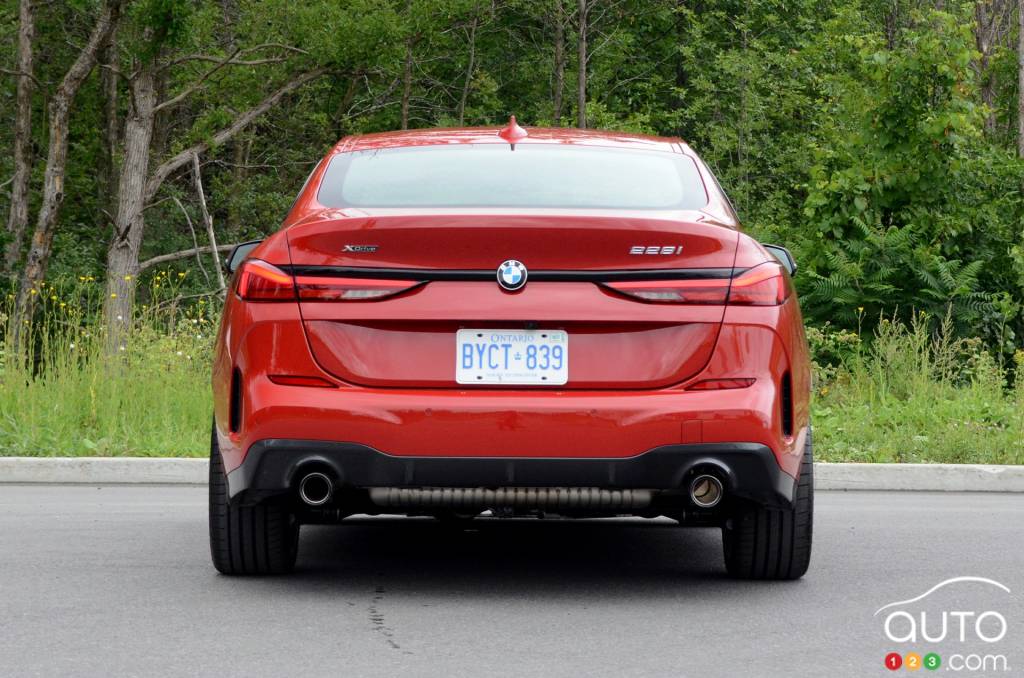 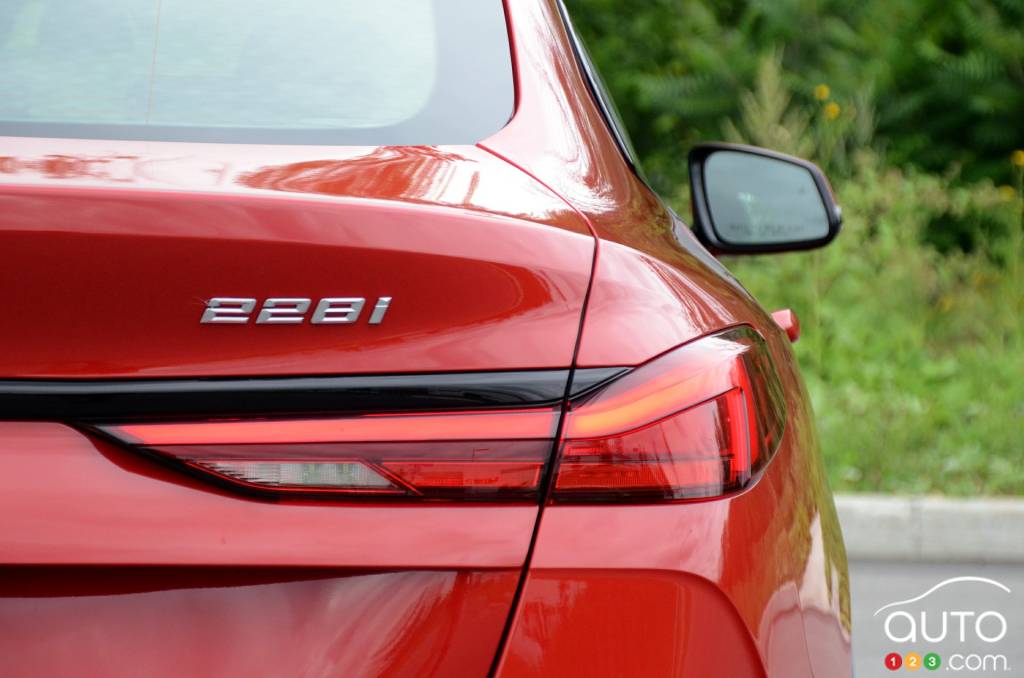