There’s a fall tradition I have that I try never to waver from, and that is to head down from Quebec to Hershey, Pennsylvania for the Hershey Fall Meet, the largest gathering of classic cars in the world.

See The Best Cars at RM Sotheby's Auction in Hershey

Here's what it was like to do the round-trip aboard the 2020 Kia Telluride, the new three-row SUV from the Korean automaker. It's important to understand that the choice of vehicle that transports us to the event each year is crucial, because while we always depart with but a few travel bags in tow, we tend to come back with... a little more stuff.

See our review of the 2020 Kia Telluride

Specifications of the 2020 Kia Telluride 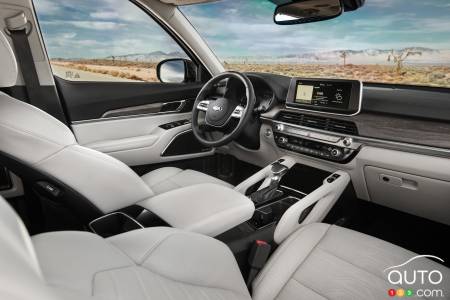 Lots of space
Some years, I’ve gone to Hershey on my own. For that, a Mazda6 or a Volkswagen Tiguan was enough. In 2014, traveling with a colleague, I drove a Volkswagen Golf wagon. When two or three people accompanied me there, then we had to think in terms of volume: a Honda Odyssey or Pilot, Chrysler Pacifica, etc. You get the idea.

This year provided a perfect opportunity to test drive one of the two new full-size SUVs that appeared in the lineups of the Kia-Hyundai duo this year, the Hyundai Palisade and the Kia Telluride. Since I attended the launch of the former last June, it was time to test drive its twin at Kia.

With seven seats, but more importantly, a volume of 2,455 litres, or 1,304 with the second row in place, the Telluride allowed us to set out with peace of mind intact – in principle. 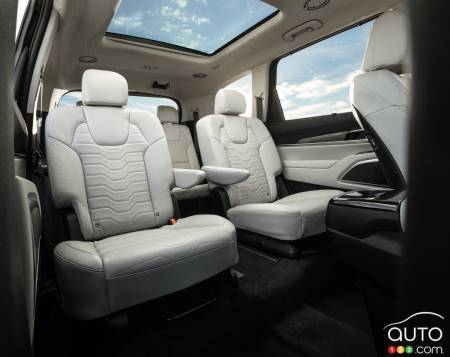 If at first you don't succeed…
A few words about the new Telluride. Recall that 10 years ago, Kia introduced its first seven-seat SUV, the Borrego. The vehicle was solid and reflected the brand's equally solid progress since its humble beginnings. The problem was that it came out at the peak of the financial crisis and in the midst of soaring oil prices.

Bad timing, as they say. The Borrego departed as it arrived, in the shadows.

Ten years later, the company makes another go of it, and this time the timing is better. Above all, the engine under the hood is much more frugal than those of the Borrego in 2009 (a V6 and a V8).

Clearly, the chances of success are better, and that's without counting on the further progress made by the manufacturer since then. 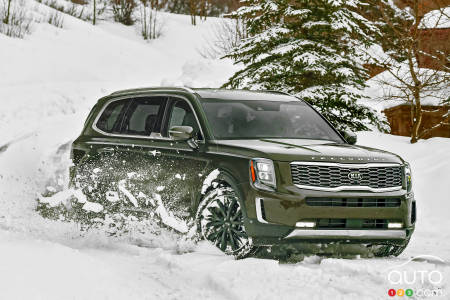 Great comfort
The first criterion when you're about to drive 2,000 km is obviously comfort, especially when you have a choice. That many clicks in a Toyota 86 can be hard on the back. Aboard the Telluride, neither my passengers nor I complained for a single moment. The front seats, just like the second row, answer the call. More side bolsters and they'd be perfect.

Perhaps even more striking was the comfort offered by the vehicle itself. In fact, it feels like driving on a carpet of air, especially on American highways, which are "slightly" better maintained than ours, at least in the states of New York and Pennsylvania.

Comfort-wise, therefore, for a long ride, there is nothing to complain about regarding the Telluride's performance; it's faultless.

Is it fun to drive though? No, I can’t say that. And it's not because there are any expectations of having “fun” driving a vehicle like this. But I can’t but feel that if the steering were more precise, and the sensations a little more vibrant in the cabin, that would make all the difference. 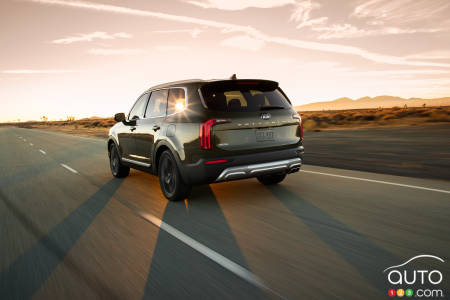 Consumption
With a few thousand kilometres to cover, a vehicle's fuel consumption can have a noticeable effect on the budget. In our case, with three of us sharing the costs, the impact was reduced, but for a family on a road trip, it's a big deal.

In total, we maintained an average of 8.9L/100 km on our return trip. It should be noted that 95% of the drive was on the highway. Still, that is more than acceptable for a brontosaurus like this, carrying on its back three adults, their luggage and their purchases made in Hershey.

Because, well, yes, there was some craziness...

In this respect, once again I award the Telluride a good grade. 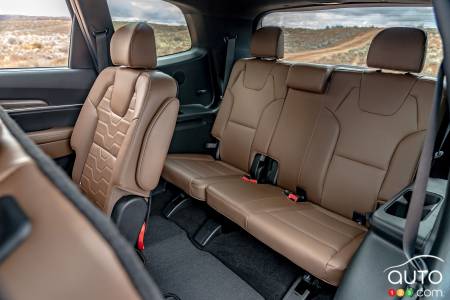 Space
There's no shortage of space aboard the Telluride. Even with all the purchases made on the spot, both calculated and impulsive, we were able to pack everything on board for the trip home. However, having made a few trips like this with a van, this experience with the Telluride served to reinforce an argument I've been using for many moons: nothing is more practical than a van.

To give you an idea, the total cargo volume available in the Telluride with all its seats folded down is about the same as what the Chrysler Pacifica offers… behind the second row. Same goes for the Odyssey.

In other words, though automakers like to pitch to consumers the generous space of a big, seven-seat SUV, if you have a largish family and you need a lot of room, a minivan is what you need.

And believe me, those untrendy minivans are no less interesting to drive than most SUVs. Even the comfort level they provide is generally superior. As for fuel economy, it's mostly a stalemate.

Convenient for a family trip, the Telluride? Yes, but still not as practical as a minivan can be.

Driving aids
Here are some of the additional elements that caught our attention during the 2,000 kilometres or so we travelled.

First of all, the vehicle's adaptive cruise control also takes care of keeping the vehicle in the lane without the driver having to pull the steering wheel. The Telluride is not alone in offering this capability, but unlike most others, the system can be relied upon over a longer period of time. So rather than being directed every 10 seconds to put your hands back on the wheel, the delay is closer to 35, even 40 seconds. As a result, you only need to touch the wheel twice a minute to give it a little steering in order to, basically, let yourself be driven. And the system is effective; the vehicle keeps the centre of its lane without jerking to constantly reposition itself.

On the model provided to us, cameras on each side of the vehicle project an image between the dials of the central gauge, showing the blind spots on the side where you want to go. The system is similar to Honda's LaneWatch system, except that it's also available for the driver's side.

At times, a quick glance at the screen can be very reassuring before making a lane change, either because traffic is very heavy or because you're simply blinded by the sun. Frankly it’s a feature that should be ubiquitous throughout the industry. 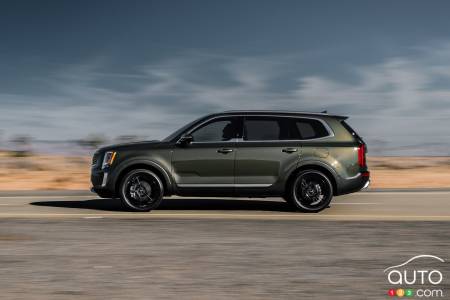 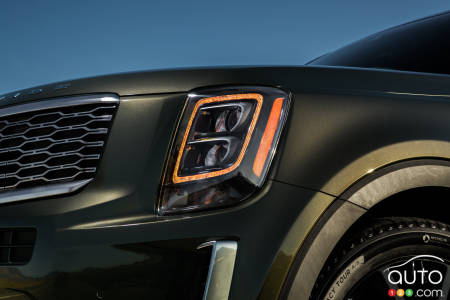 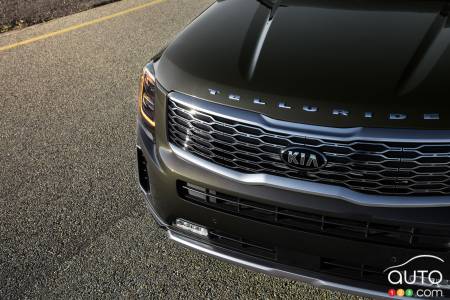 Conclusion
Kia's Telluride is a solid, serious product, like the Hyundai Palisade. Its big challenge is to shake up established big-shots in the segment like the Honda Pilot, Ford Explorer and Toyota Highlander, among others.

If the company has high short-term expectations, it will be disappointed. Only time will allow this vehicle to make its mark. The quality is there, but patience will be required.

Auto123 decides what 10 things you really want to know about the new 2020 Kia Telluride. The big SUV has been created with the goal of convincing minivan own...

The 2020 Kia Telluride is a new big lug that won’t make anyone rave about its sportiness, but it still constitutes one of the better additions to the segment...