Kelowna, BC – I’m probably not alone in saying this, but I have to salute Lincoln’s decision to move away from its old letter-based model naming system in favour of nautical-based names. Thus the big Navigator and the Nautilus have been joined this year by the Aviator, and now by the 2020 Lincoln Corsair compact crossover, the smallest of the bunch.

The brand-new Corsair is essentially a spruced-up Ford Escape, sharing many of that model’s inner workings underneath a refined, comely exterior. Mind you, the new 2020 Escape is also a vastly improved product itself, so for the Corsair to use it as a basis is not such a bad thing. Besides, visually Lincoln has taken care to give its crossover a design signature quite distinct from that of the Escape. 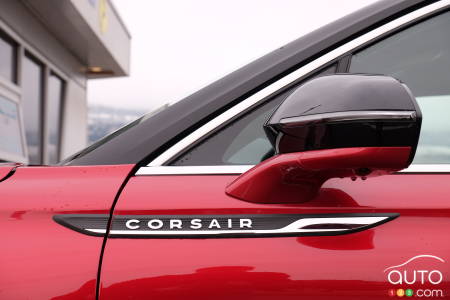 Don’t call it the MKC 2.0
The Ford and Lincoln Motor Companies are clearly taking steps to make their lineups of new SUVs as appealing as possible, which is to be expected given that their baskets contain fewer eggs with the virtual extinction of their car lineups. And so the Corsair, which basically arrives to inherit the space in the luxury automaker’s lineup occupied previously by the MKC, represents an improvement over that model in most of the important ways.

The Corsair is, for instance, a bit longer, a bit wider and a bit lower to the ground than its predecessor. It borrows several of the design characteristics of the larger Aviator as well, such as the line that runs the length of the vehicle, as well as the Corsair name appearing below the A pillar in a swath that even evokes a pirate's saber. It also shares the Aviator’s unapologetically square, upright demeanour as opposed to the more horizontal, car-like lines of the Escape. 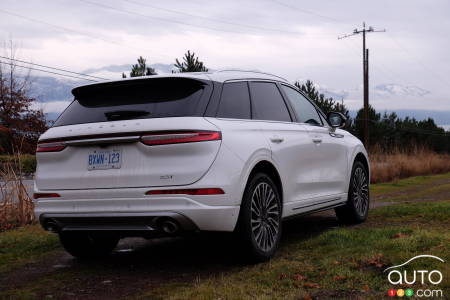 Inside
The new Corsair offers up an airy, streamlined environment that reflects the company’s stated desire to create a driving experience that rejuvenates instead of tires. Again, many cues are taken from the larger Aviator in terms of the ergonomic setup, in fact the interior is a virtual twin of the new Aviator, writ slightly smaller.

What you get is a pleasingly straightforward horizontal direction for the dashboard, free of unnecessary curves and angles. I quite liked the cluster of knobs, buttons and commands on a type of shelf on the lower portion of the central console. That shelf itself floats above a storage space below. Lower down sits the drive mode button, which I repeatedly and reflexively took for the gear shift knob for having seen that arrangement in other models – and which got me nowhere of course, the gear change commands being located, in the form of a row of buttons, higher up the console.

Overall, the materials used are supple when possible and felt of high quality. 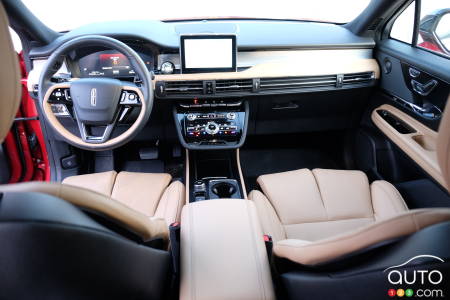 Other notable elements include the placement of the commands for the 24-way power-adjustable front-row seats on the doors instead of down on the side of the seat itself, as well as the 8-inch touchscreen seemingly glued onto a shelf on the upper part of the central console. Those seats, by the way, have an (available) massage function, which can be activated and configured via that glued-on tablet that passes for the touchscreen.

Lincoln is debuting three new two-tone interior colour schemes with the Corsair: Beyond Blue, Medium Slate and the one I Iiked best, Cashew, which combines a rich tan with black to winning effect.

No more key, in fact no more key fob
Perhaps the most gimmicky gimmick on offer, tech-wise, is Lincoln’s Phone as a Key function, available here as an option on the Reserve edition. It allows owners (and up to 3 other users) to install an app on their smartphone and use that instead of a fob to access, start and configure preferred settings for their Corsair. It’s distinct from other systems in that you don’t even need to have the fob with you when you approach and enter in to your vehicle. 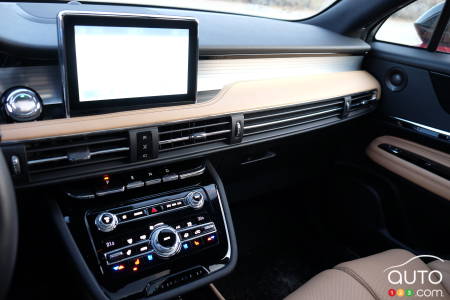 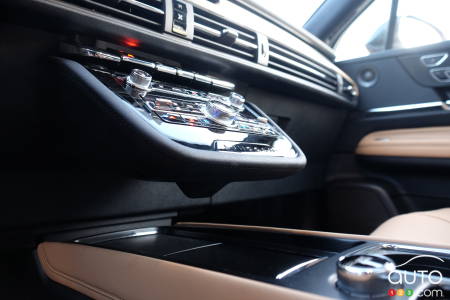 If that’s not enough, there’s still more gimmickry in this resolutely high-tech vehicle for those into that kind of thing. A button on the steering wheel activates (sometimes accidentally, we noted) the voice control system, there’s an available wireless smartphone charging (via a slot inside the storage space between the front occupants) and a built-in wi-fi hotspot, etc. etc. An option with the Reserve edition is a visually impressive (though oddly slow-reacting) 12.3 digital instrument cluster in front of the driver.

Sanctuary
These features, the aforementioned massage function, a special double separation wall between the engine bloc and the cabin (for a quieter ride), noise-reducing windshield and a rear suspension system different than found in the 2020 Escape help create what the folks at Lincoln label the concept of Sanctuary, according to which the interior environment should not be a stress-inducing environment but a stress-reducing one. We would say their attempt is largely successful. For a vehicle that’s so tech-laden, the new Corsair is remarkably user-friendly. The ergonomics are sound, Ford’s Sync 3 infotainment interface is valiant and the seats are comfortable even before you get to the massage function. For a compact SUV, the space for back-row passengers is acceptable if not overtly impressive.

The drive
For better or for worse, however, that concept of new-agey sanctuary extends to the drive. To be clear, the 2020 Corsair doesn’t lack for power, particularly from the available 4-cylinder 2.3L turbo engine (295 hp, 310 lb-ft of torque) that came with the Reserve edition that we drove on our test run through the beautiful Okanagan Valley. Working with an 8-speed SelectShift automatic transmission, that unit had no trouble whatsoever delivering the needed punch to make highway passing and moderate highway ascents absolutely effortless. More than enough juice for the jar, in other words. In fact, though we didn’t get the chance to drive the base 2.0L 4-cylinder engine (250 hp, 280 lb-ft of torque), we were assured by those who did drive it on this day that even that unit delivers plenty enough power for this compact crossover. With either engine, the Corsair comes with an all-wheel-drive configuration.

No, the reason we say the sanctuary concept extends to the drive itself is that in no situation did we get much sense of sportiness. This model, we felt, doesn’t even really try to compete with the sprightly German compact utility models like the BMW X3 or Mercedes-Benz GLC. Acceleration is solid, as mentioned, turbo lag falls within acceptable limits, and we felt no appreciable roll on curves, but the steering is, if not flabby, not particularly crisp. Braking, meanwhile, was biting and reassuring. 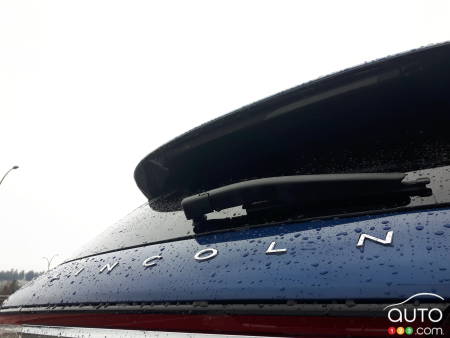 Drive modes
In search of some excitement, we set off on a ramble through the available drive modes, and lo and behold found… Excite! This is, we figure, for when Normal is too mundane, when you don’t feel the need to Conserve, and when you’re not driving in Slippery or Deep snowy conditions. Excite does tighten up throttle response and stiffen the suspension slightly, but it doesn’t… excite. Maybe they should have named it, I don’t know, Awake.

Let’s be fair, though. As mentioned, I suspect Lincoln is not even in the game of trying to conquer too many  lovers of sporty German SUVs, rather they just want their compact crossover to be dynamic enough to pull in younger consumers, and, mostly, kick Cadillac’s butt.

And by this measure the 2020 Corsair is an interesting product. That 2.3L engine is impressive, the braking is sharp, and the tech features are up-to-date and cool, as the kids say today. Plus the outer shell is pretty attractive, and it’s matched by a refreshingly simplified interior that sophisticated without trying too hard to be hip. Sanctuary, indeed… 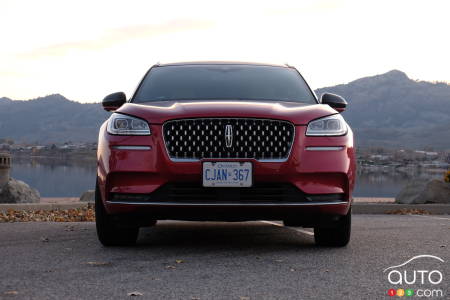 The pricing
Pricing for the base model of the 2020 Lincoln Corsair starts at $46,400, but this can rise quickly. Our Reserve edition with the larger 20-inch wheels and panoramic sunroof as well as the bigger 2.3L engine came with a total asking price north of $68,000, which actually puts it just a notch above the base version Aviator. And which is a lot for a compact crossover, even a luxury one.

Will this discourage potential luxury-SUV buyers? Lincoln itself says the new Corsair is intended to provide upwardly mobile consumers with a gateway to the luxury segments. 68 big ones is a lot to ask those who are used to paying more pedestrian prices for their vehicles. 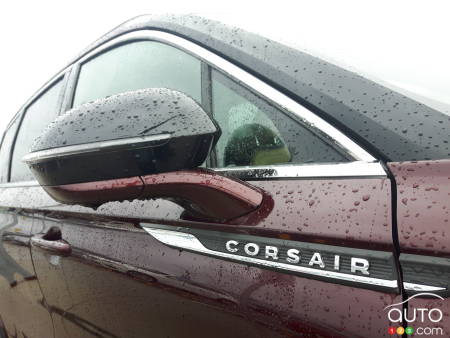 Abundantly powerful engine
Interior design is very likable, even lovable
Braking is sharp
High-tech without being overbearing
Quiet ride, and smooth (though we reserve the right to change our opinion upon testing it on our rough Quebec roads!)

Where’s the Excite?
Steering is ponderous
Pricing climbs to alarming heights when going all-in on the options
Why not truly integrate a touchscreen into the design of a brand-new model instead of gluing it on like an afterthought? 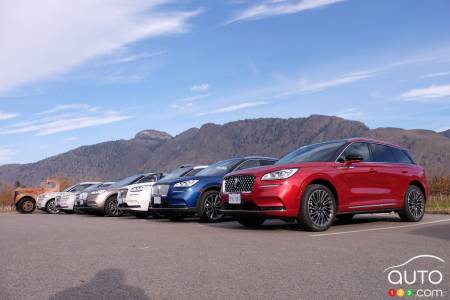 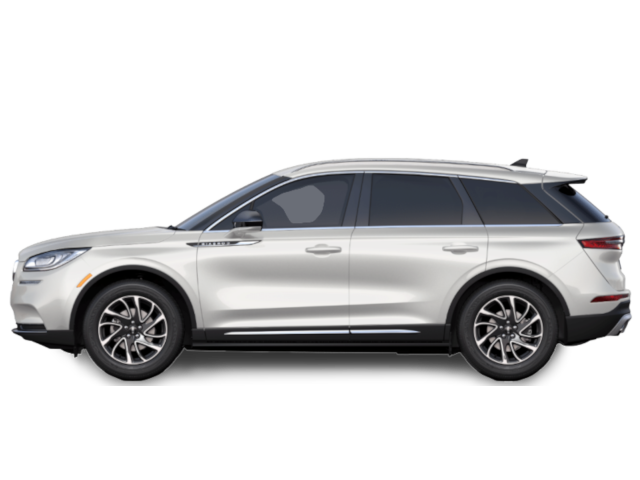 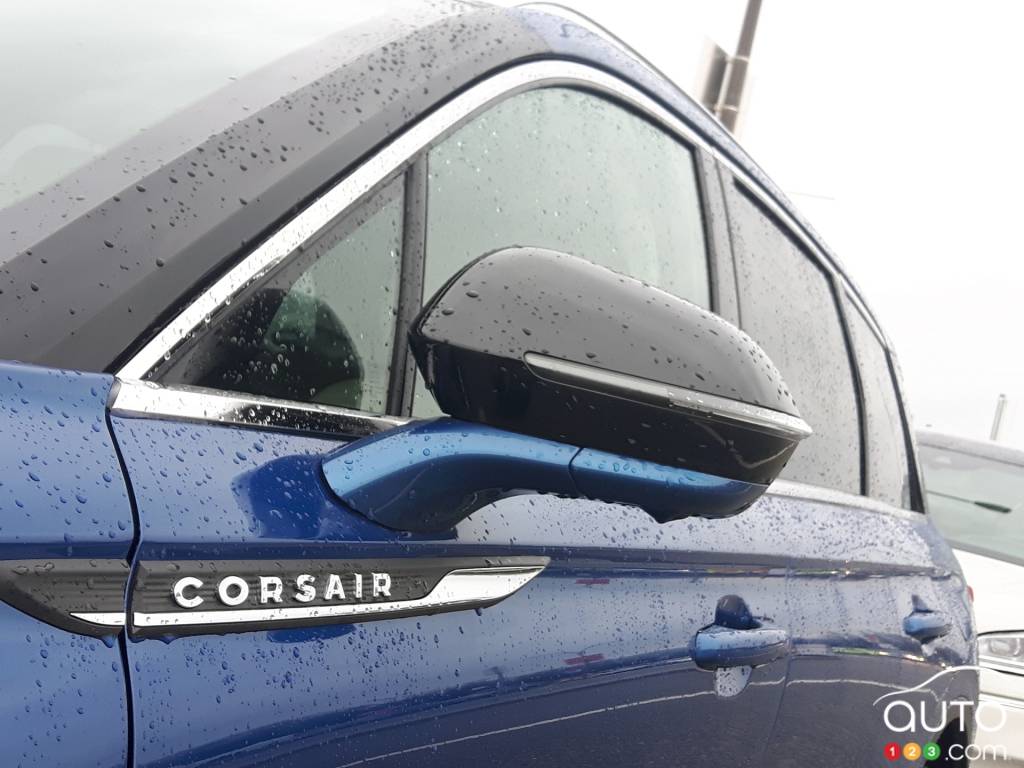 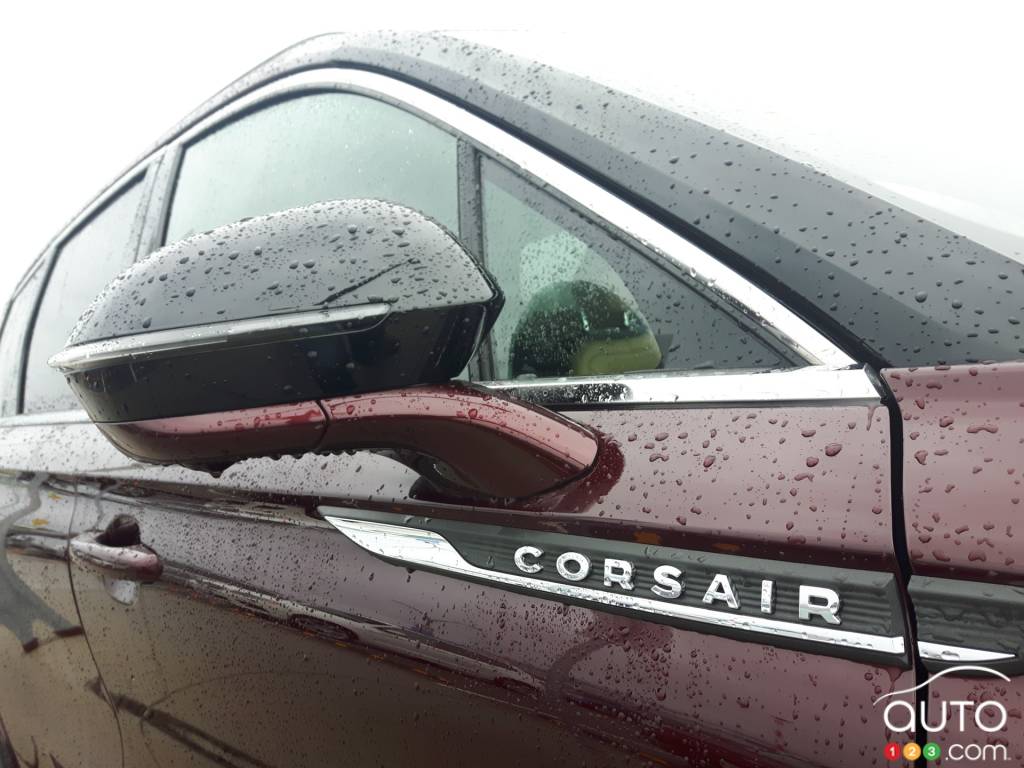 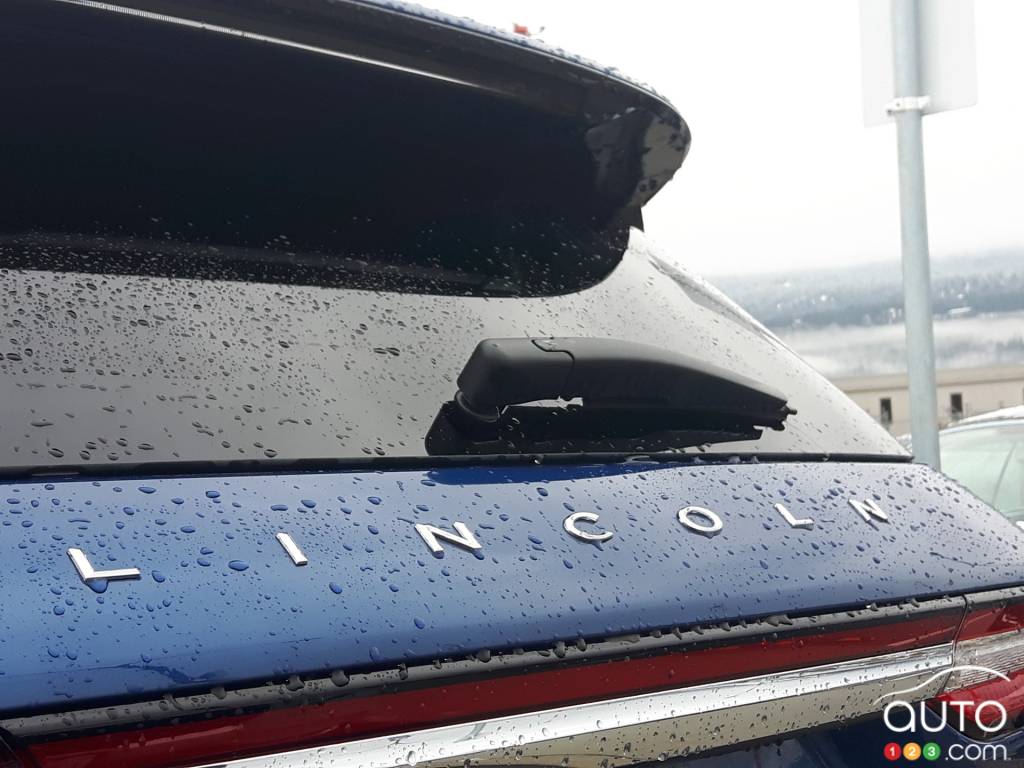 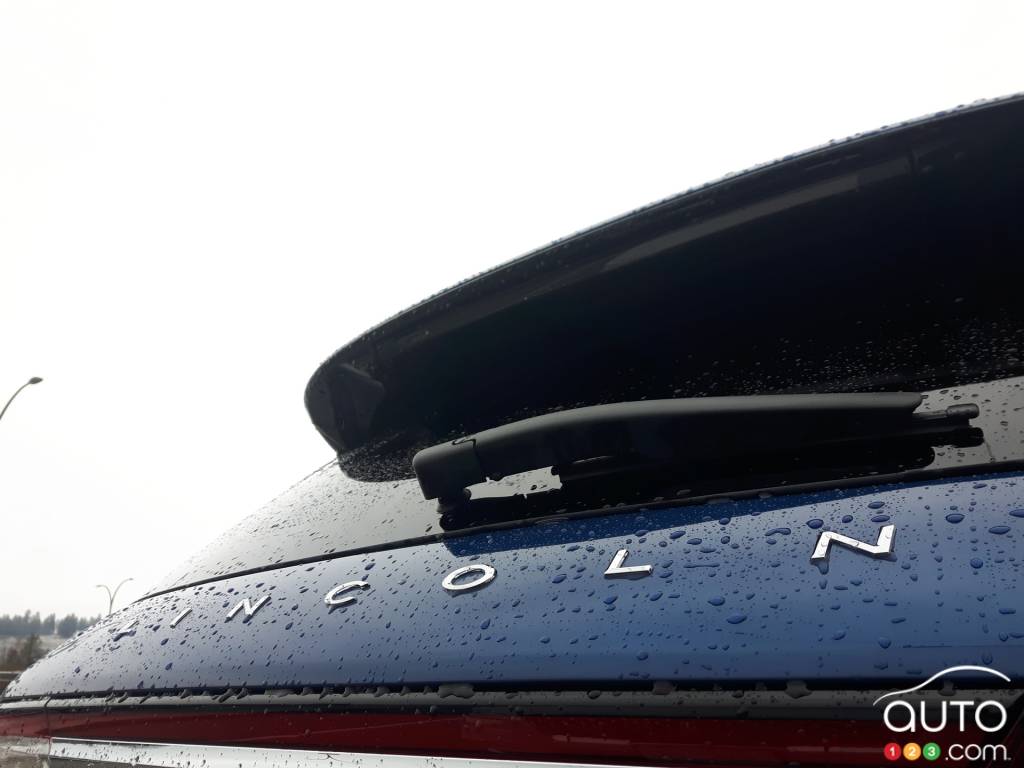 The 2021 Lincoln Corsair is a worthy contender in the luxury compact SUV category. While the successor to the now-defunct MKC shares many elements with the m...