Santa Monica, CA - The Sentra was once a big star in the Nissan family, but the path that star has taken across the sky has been that of a roller coaster; its slow, gradual ascent was followed by a 100-mph descent. To spot the beginning of the latter, you have to go back to the 2007 redesign, the year of a completely failed redesign.

The automaker been working hard to get the Sentra back on track since then, but the competition has taken advantage the slip and so the Nissan has been relegated to a secondary role in the segment. The outgoing edition of the model, its several qualities notwithstanding, just never succeeded in imposing itself.

For 2020, Nissan started from scratch, and so we get a new vehicle with a new platform, a new engine (new to it, anyways) and a new design, among other things. 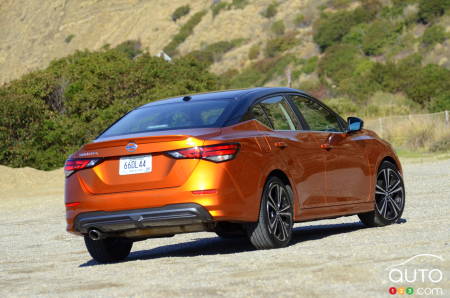 Our first contact quickly confirmed to us that Nissan has delivered the best Sentra since 1982, the year it first entered the market. Except....

Except that in the current context of the industry, in which sedans are falling like flies, not to mention that Toyota and Honda still offer its big guns the Corolla and Civic, nothing’s going to be easy for the mini-Altima (no denying it, the family resemblances are there). And, above all, there are a few holes in the product offering that could have an impact on its success. 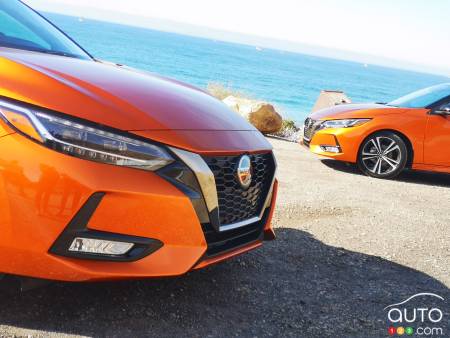 Less anonymous
The last Sentra wasn’t ugly, but it was as invisible on the road as a gust of wind. The new edition is fortunately more distinctive and noticeable, and the initial reactions have generally been positive.

Keep in mind, of course, that as per usual test-drive tradition the model you see here rests at the top of the trim hierarchy. The 18-inch wheels, for example, really help spruce the car up. The S and SV versions, sitting below the SR, ride on 16-inch wheels – for which, it should be noted, two designs (steel and alloy) exist.

As for the colours, while the hue of the model we tested in California is truly spectacular, true vibrant  paint finishes are few and far between for the Sentra. In fact, apart from one blue and one red, buyers are entitled to six shades ranging between white and black. What really helps the model is when the black roof is present. Regardless of the colour of the rest of the car, the floating effect that black roof is pleasant to the eye. 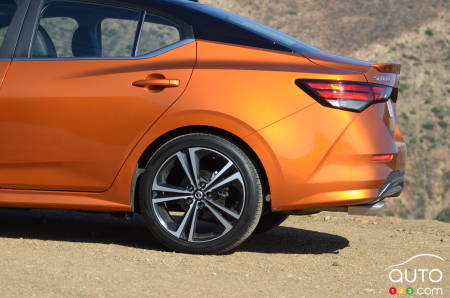 If the Sentra proves a success, its styling will have been a big contributing factor – and if it fails, you won’t be able to pin it on that.

Only one engine
The Sentra gets a new engine, a 2L 4-cylinder engine that's good for 149 hp and 146 lb-ft of torque. These represent increases of 20% and 17% respectively when compared to the 1.8L block of the old mill.

The "new" unit is in fact the engine currently used for the Qashqai, which means we're starting here with a good foundation. The problem is that apart from the basic version, which is served by a 6-speed manual gearbox, drivers have to make do with a continuously variable transmission (CVT) in all other trims. We’ve said it before, but Nissan’s CVT is a double-edged sword: while it’s certainly a money-saver at the pump, it also verges on unpleasant in real-world driving. Now, if you don't have a heavy foot, you won't care, but the fact remains that when you need to pass or accelerate hard, the CVT takes its time getting to work and complains a little too much once it does. 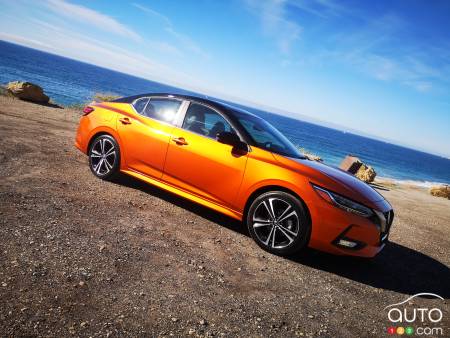 If only we could fall back on the manual gearbox. But that's not the case, unless we're willing to compromise. In any event, it brings us to the false notes we discerned and that may hurt the Sentra going forward.

Missing pieces
Generally, the Sentra comes fairly well-equipped, and we’ll come back to the interesting elements it brings to the table. Unfortunately, the product offering has two "holes" that drew our attention.

First, there’s the basic S version with manual gearbox. While we applaud the choice of this transmission, a Canadian exclusive by the way, we were disappointed to see that heated seats aren’t part of the deal with the only version that offers that gearbox. We don't understand that one. Better, in our view, to offer it to Canadian buyers and adjust the price accordingly. 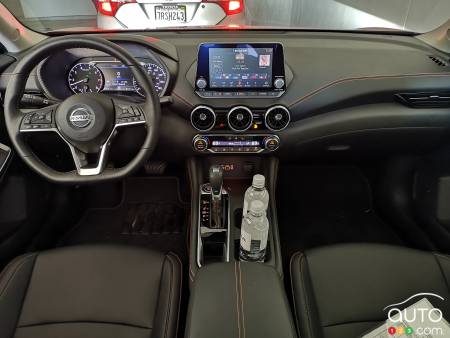 Speaking of pricing, Nissan Canada is in the process of finalizing that. The 2020 Sentra, which is set to debut in February, will be at the Montreal Auto Show, so we expect we’ll get all that info then.

The other point that could turn buyers away is that to take advantage of Apple CarPlay and Android Auto applications, you have to move up to the SV version. With many brands, there’s simply no question on this front anymore; it's delivered right from the start and that’s that. And it's not as if Nissan wasn't aware of the popularity of these apps. As proof, no Sentra comes with or offers navigation, because the manufacturers know that people increasingly rely on their smartphone apps.

We'll see how it goes, but those are those two missteps that could have been avoided, in our opinion. 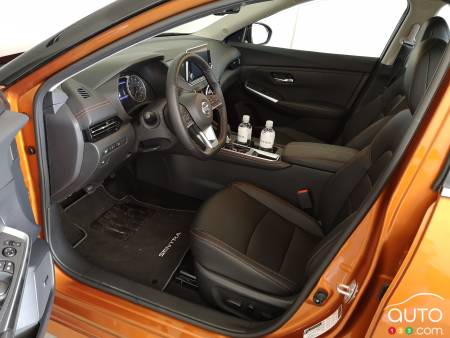 The positive side
Let’s be clear, not everything's bad with the new Sentra, far from it. The quality inside, for example, places the model in an excellent position in its segment. We look forward to seeing a base version up close, however - only SR Premium editions were available at the launch.

Still, with topstitching on the leather, an 8-speaker Bose audio system, heated steering wheel, leather-wrapped gear selector, auto-dimming rearview mirror, LED headlights and fog lights all part of the show here, it’s clear nothing was left to chance for the revamped new Sentra.

Nor has Nissan skimped in terms of safety features, thus even the base version comes with Nissan Safety Shield 360. This safety suite includes automatic dipped-beam headlamps, intelligent emergency braking with pedestrian detection, lane departure warning and automatic emergency braking in reverse, as well as alerts for blind spots and rear cross-traffic. 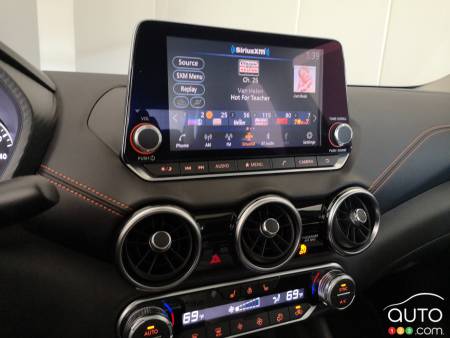 At the wheel
There’s more good news when you get behind the wheel and start her up. Putting aside the pedestrian behaviour of the CVT, the overall experience is marked by solidity. Power is adequate and the chassis, which has been overhauled from start to finish, is very solid. Several electronic driving aids (Active Ride Control, Intelligent Trace Control and Vehicle Dynamics Control) work imperceptibly to enhance it all.

A good word is in order as well for the soundproofing, which seemed excellent to us, as well as for Nissan's Zero Gravity seats, which, without much fanfare, take care of occupants’ backs and add to the feeling of comfort. 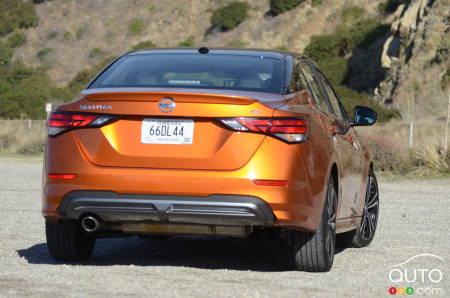 Fuel consumption
Here are the fuel consumption ratings announced by Nissan. With the manual gearbox model, we're talking 9.4L/100 km in the city, 6.4L/100 km on the highway, and 8L/100 km combined. With the CVT transmission, the numbers drop to 8.0L and 6.0L/100 km for city/highway driving, respectively. With this transmission, the combined average is a solid 7.1L/100 km.

For the SR version, due to the presence of those 18-inch tires, add 0.2 litres to each rating. 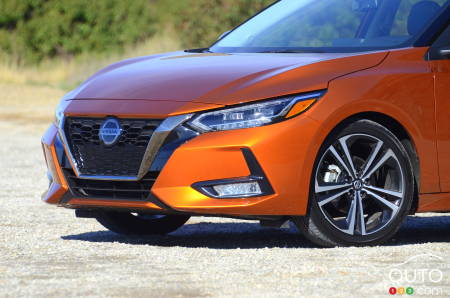 Conclusion
Nissan has put in some real serious work with the new Sentra, and this eighth-generation model is without question the best to date.

Challenges remain, however. Nissan is launching the 2020 Sentra back into a segment that continues to lose ground, even as it is still populated by models that are very popular with consumers, namely the Toyota Corolla, Honda Civic, Hyundai Elantra and Mazda3. Ominously for the Sentra, even the latter model, totally revamped last year, is struggling. 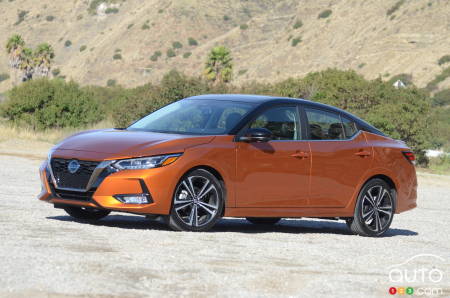 Positive driving experience, with good feedback from the road
Solid progression for the model
Comfort and ride smoothness
Fuel economy 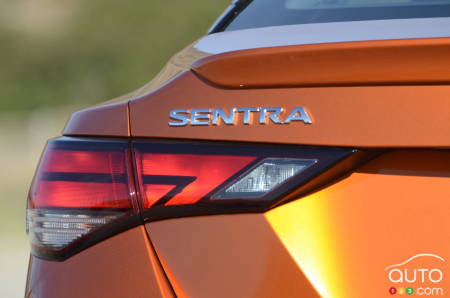 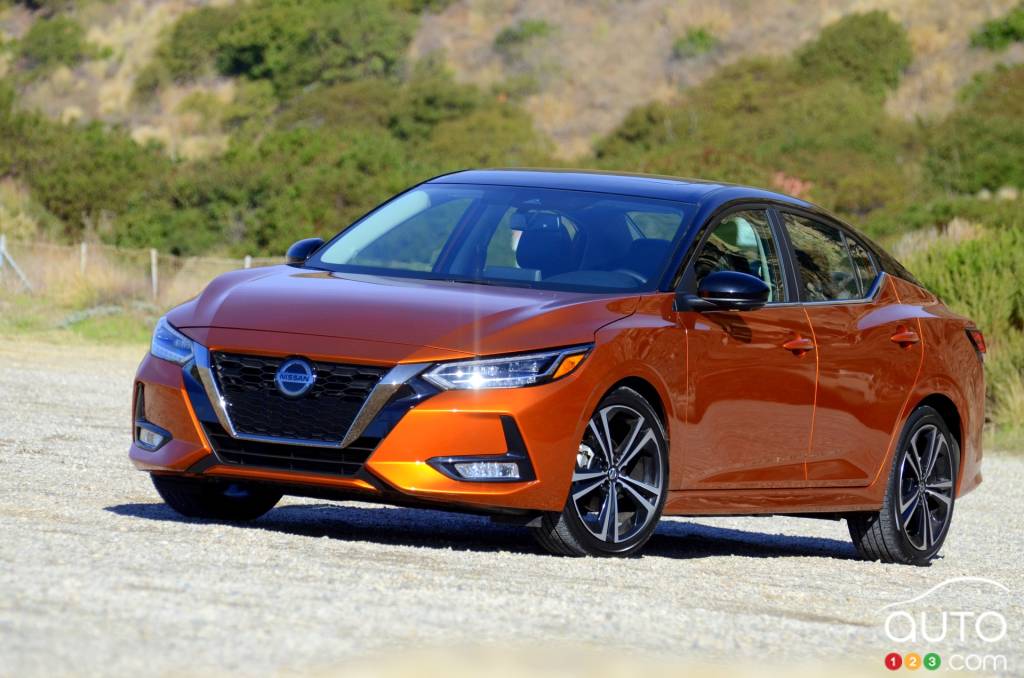 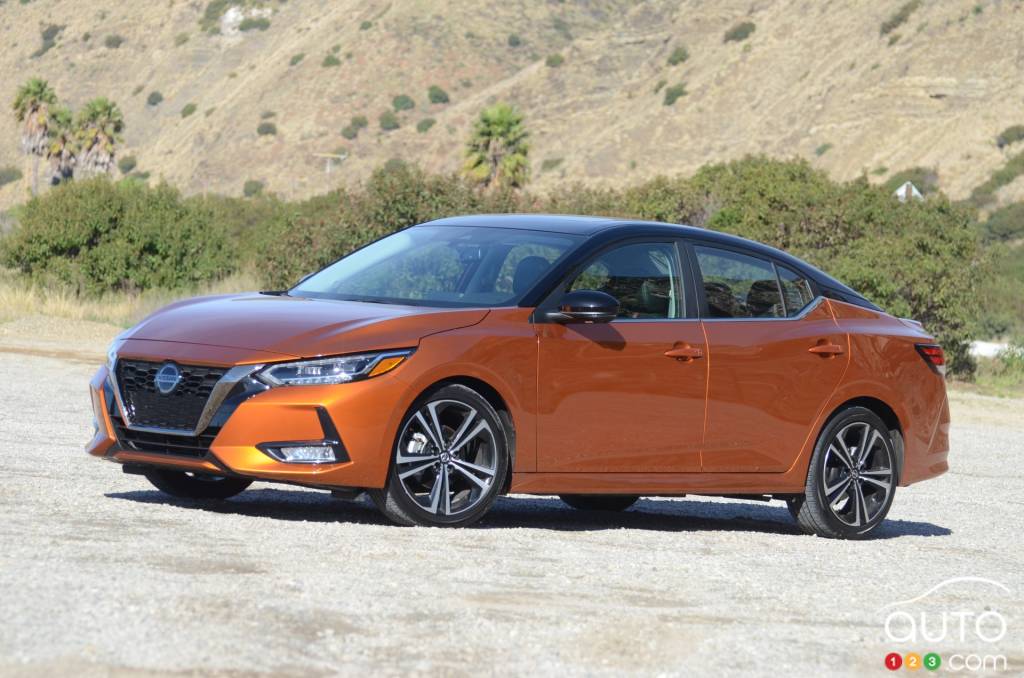 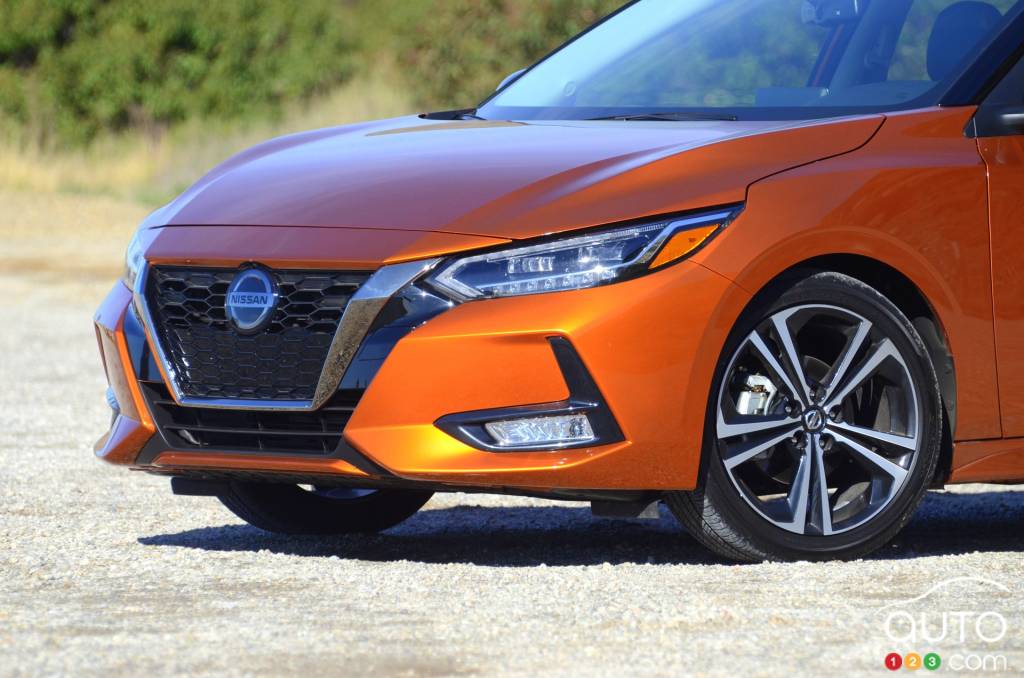 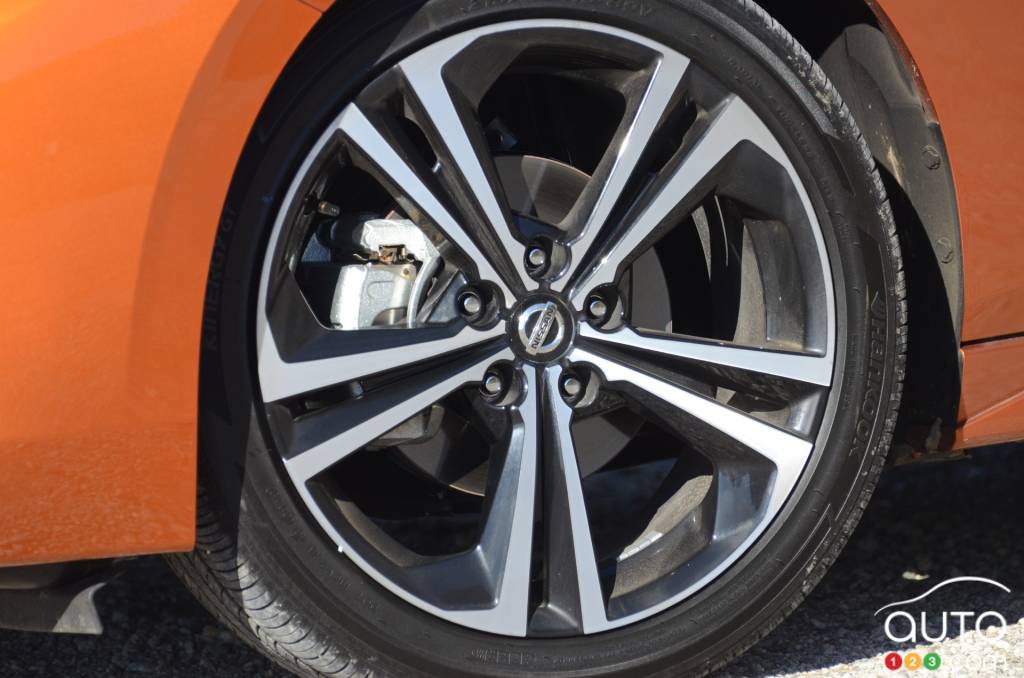