The Kia K5 comes to us at a time where the compact-mid-size sedan category continues to hemorrhage sales to the compact and mid-size CUV crowd, but that hasn’t stopped Kia from delivering one heck of a good-looking sedan that comes with an agile chassis, an able powertrain and, above all, a feeling of quality that you can’t always count on in the segment.

It really does start with those looks, though – actually, more precisely that that, it starts with those headlamps and even more precisely than that, it starts with the wildly-shaped DRLs set within those headlamps. They’re styled to look like an EKG pulse and my oh my, they may just be enough to finish off what is the most unique headlamp assembly you’ll find today, and they help the K5 look far more premium than its price tag suggests. Which, as we’ll soon see, is the case for many aspects of this great new sedan from Korea.

The big news here is that all except the top-spec GT come standard with AWD – for some reason, the GT and its more powerful motor are stuck with front-wheel-drive. But AWD at base? That’s a big win for Kia’s mid-size entry as only Subaru and Nissan can currently make that claim this side of the luxury manufacturers.

Other standard features include a turbo motor good for 180 hp and 195 lb-ft of torque, 8-speed automatic transmission (there is no manual, unfortunately), alloy wheels and LED headlights. 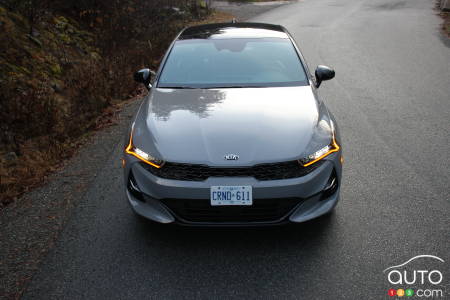 Inside, well, let’s just say the interior the K5 has is an interesting take on what mid-size sedan interiors can be.

At first glance, it’s got some great detailing: 10.25-inch infotainment display (that shrinks to 8-inch on the bottom two trims, but for some reason, only the smaller screens are compatible with wireless Apple CarPlay), synthetic leather seating, flat-bottom steering wheel and a dazzling array of surfaces that range from faux-woodgrain to a sort of billeted steel look. It looks good but there is some detailing that is a little confusing, as if Kia brought a number of designers onto the project, and told them to “have at it” and they didn’t always stick to the “one version of the truth” idiom.

Take the t-bar shift lever, for example. It looks like it belongs in a ‘70s muscle car and that’s cool, but it forms a bit of a strange contrast with the infotainment display above, whose graphics look a little like they were designed by someone who had cut their teeth designing WinAmp skins. Again; nothing wrong with it, but I’m just not sure it fits.

There is a neat-o feature, though, that allows you to choose from different “themes” that aren’t just graphical, but audible as well; if you select the “Lively Forest” theme, the car actually pumps soothing tropical – at least I think it’s tropical – forest sounds through the 6-speaker audio system. “Open-Air Café”, meanwhile, makes it feel like you’re driving around in a Starbucks. 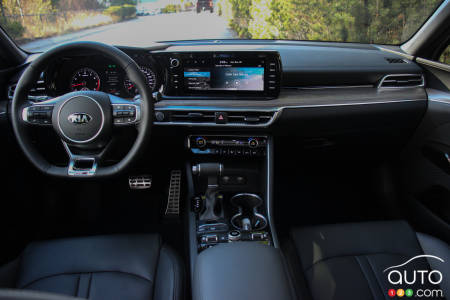 While it doesn’t wireless CarPlay, it does have wireless charging, done via an ingenious vertically-mounted charger with a door and cooling system mounted just ahead of the centre armrest. It’s the perfect spot for your phone, as you won’t be tempted to store much else there.

Sticking with the interior: the 2021 Kia Seltos crossover also gets that ambient sound feature and big display, but in addition to that, it gets a big TFT display between the gauges for your trip computer. The newer, pricier K5? It does not, instead making do with a smaller, more traditional-looking screen that looks far less integrated into the gauge cluster than does the item on the Seltos. It’s not bad and it shows you all the info you could want, but why not get the new stuff in the new car?

All that aside, I love the driver’s seating position in the K5 and the back seats prove surprisingly roomy, even with my tester’s full-length moonroof. That features does affect headroom somewhat but as long as you’re of no more than average height, you should be fine. 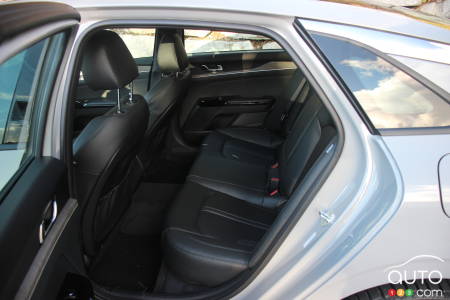 While that driver’s seating position feels right as soon as you drop into the seat, there’s also something about the way the K5 goes about its business once you start moving that gives the impression that you’re in a proper luxury sport sedan. There are no creaks or rattles from the various interior bits and surfaces (as varied as these are) or the chassis, and the K5 just moves through town feeling properly “as one” and ready to tackle most any road you can throw at it. It rides incredibly well, it sounds nice, and you can tell it’s responsive even at slow city speeds.

Which, as it happens, is where you get to sample one of the K5’s coolest party tricks, and that’s a driver aid that actually prevents you from making a bad left turn. If you start to turn left through an intersection and the K5 senses something is coming, it will stop you even before you see it. It’s like cross-traffic alert taken to the nth degree.

On the open road, though, is where the K5 really starts to show its true colours.

Power is delivered quickly from tip-in, as the well-tuned 8-speed auto does well to mitigate any turbo lag. The transmission bangs through gears quickly (especially in Sport mode, which compliments Normal, Smart and Snow, all available using a joystick mounted just behind the shift lever) whether on its own or in manual mode, which is great. 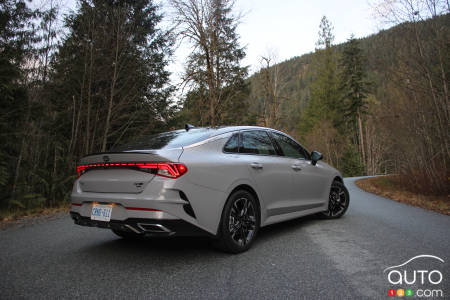 Less so is the fact there are no paddle shifters. No paddle shifters in a $35K sports sedan? That’s a strange one. The higher-spec GT model with its dual-cutch transmission gets them, but this one doesn’t. And it should. You can use the shifter, of course, but if I’m reaching for a shifter – especially one shaped like this -- I want to be kicking a clutch at the same time and banging home a gear, not flipping a switch. If you want to give a car a quick-shifting auto box, go all the way and snap some paddles to the steering wheel.

That is the only real knock I have against the K5’s drive because otherwise, it is right on the money. The steering response is incredibly alert and nicely feelsome, making sure that the K5 handles the way its looks suggest it should. It tracks true and the AWD system plus torque vectoring puts the power exactly where it needs to be to swivel this baby through all manner of turns in a stable, confidence-inspiring way. Sure, it runs out of breath a little at higher speeds as those power figures aren’t massive, but that doesn’t bother me so much as it’s fast enough to make the K5 feel special, and that’s the key.

The K5 is a great example of how you can get performance-sedan dynamics without the associated price tag. AWD and turbo power for less – a lot less – than 40 grand? That is a rare thing and you don’t have to jump through hoops to get it as the K5 is available in Kia dealers as you read this. 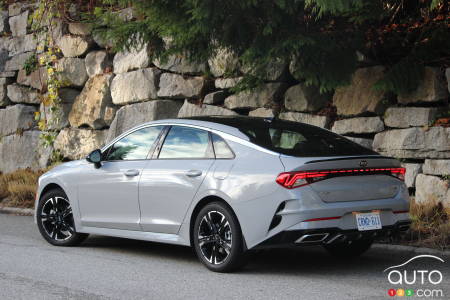 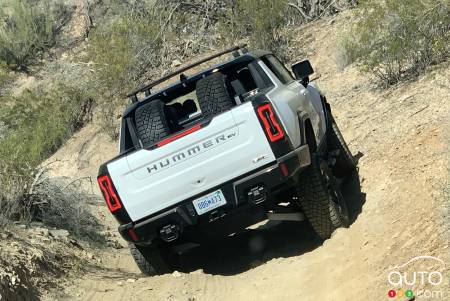 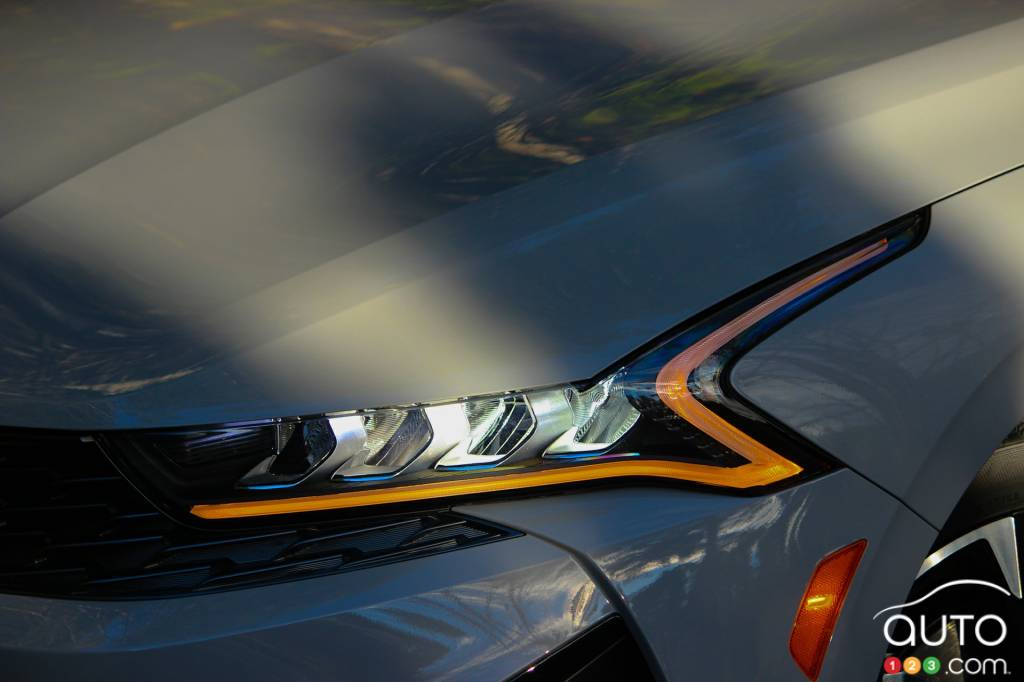 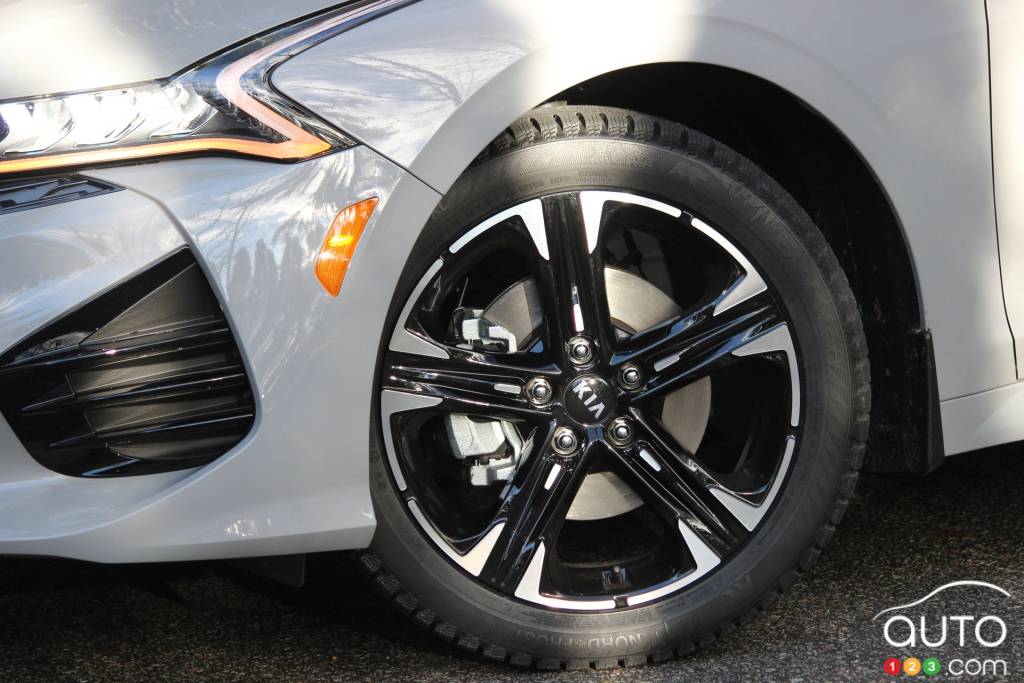 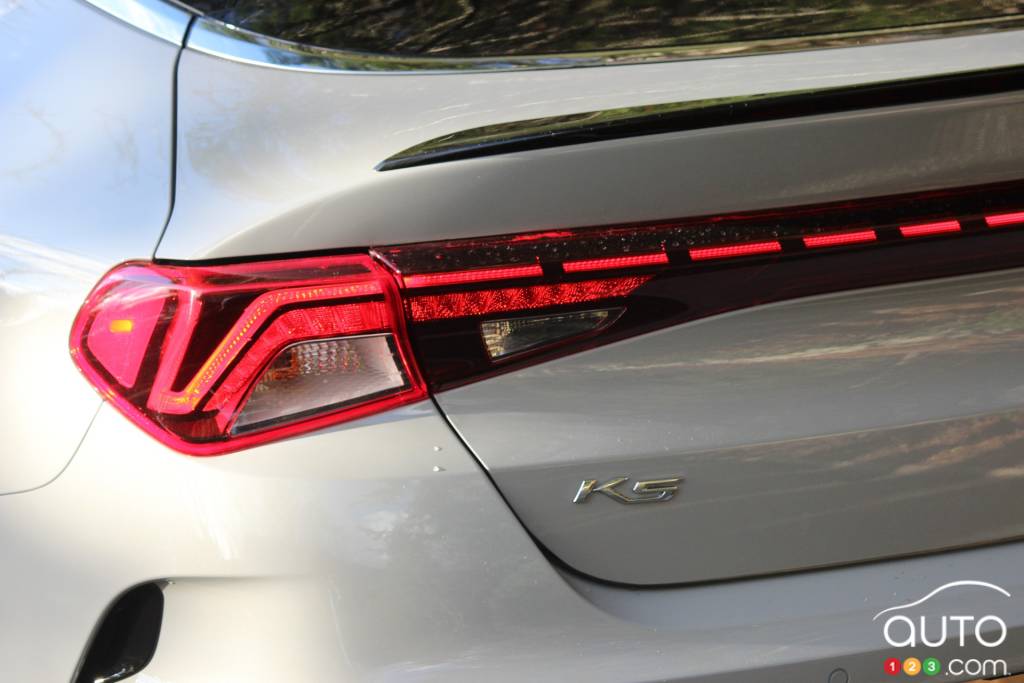 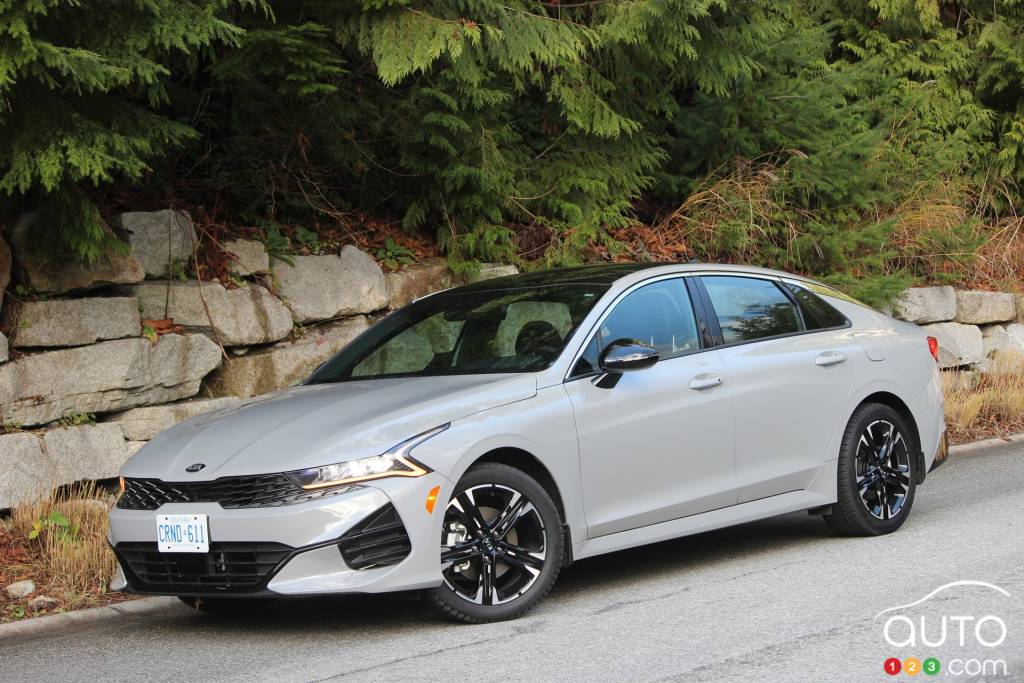 Auto123 reviews the new 2021 Kia K5 GT, just to see if all the good things being said about it are true. See what we thought of this car and what it takes to...

Kia Canada has announced pricing for its new 2021 K5 midsize sedan. Starting at just under $30,000, a total of four versions will be offered, three of which ...