Although the photos you see here, taken in December 2019, show a 2020 Subaru Legacy GT Premier surrounded by asphalt, most of my week in in and around Montreal was spent driving on road surfaces that were both icy and snowy - an ideal playground for testing the latest generation of the Japanese automaker’s trusty sedan.

Subaru is back this year with a seventh-generation model, a confident move given the decline of the category the Legacy competes in, in both the U.S. and Canada. In fact, while we applaud the arrival of a Nissan Altima with all-wheel drive (in 2019) and soon a Toyota Camry with similar drivetrain (in the spring of 2020), the Subaru Legacy has been coming standard with constant-gear four-wheel drive since the late 1980s.

And yet, despite this undeniable and for a long time unique quality, Subaru's representative in this once-popular category has never managed to break into the top 5 of the top-selling mid-size sedans in North America.

The brand's commitment (stubbornness?) in pursuing the Legacy adventure is likely due mainly to the success of the other Legacy-connected model, the technically similar Subaru Outback, which pushed the Legacy wagon into retirement (in our market anyways at least) after the 2009 model year, let's not forget. Since then, the elevated wagon has been a favourite choice of families looking for a vehicle that's practical, comfortable and capable of handling just about any winter condition.

Essentially, the Legacy offers the same (or nearly the same) capabilities as the Outback, but with reduced ground clearance and less cargo space. What's more, given the popularity of all things utility in 2020, it's even a bit surprising that Subaru still wants to market a mid-size sedan. We can’t say we’d be surprised if, should current market trends hold, the sedan is eventually be removed from the brand's lineup, no matter how good it is.

But what's going on with the design department?
One of the reasons for the Legacy's mitigated sales success here is undoubtedly its design, unobtrusive to a fault. While the target audience for this 2020 GT Premier version (read the most expensive of the range) is older - that's why the choice of available colours is limited to four - a little less restraint in the design wouldn’t be unwelcome. During my week-long test drive, I noticed exactly one single, attentive look, and that was from a tow truck driver who evidently noticed that the Subaru's shield was no longer the same as the outgoing vintage.

The 2020 edition, although redesigned, looks far too much like the 2019 model, despite the new face, redesigned 18-inch wheels, revised windows and even LED taillights in the rear. Maybe I'm a little too nostalgic, but I'd like to see an air intake on the hood for the cooler mounted over the mechanics of this Legacy GT, as was the case when the manufacturer was still offering a turbocharged variant of its sedan. For aerodynamic reasons, the new Legacy GT hides it right in the front grille.

Things are better inside
Subaru has always been known for its rather conservative interior design. Bling just wasn’t Subaru drivers’ thing. On the other hand, quality of workmanship has never been a problem, with good quality plastics and rigorous assembly the norm. For 2020, Subaru hasn’t deviated far from this policy, but it did decide to cozy up to more tech-focused potential buyers by installing a larger-than-ever 11.6-inch touchscreen, offered on the more-upscale versions of the model. Subaru's basic Legacy has to make do with a 7-inch screen.

While the screen is sure to impress those who like such things, I’ll party-poop and point out that it makes things a little more complicated for some routine operations. The climate control, for instance, is constantly displayed at the base of the screen, but this forces the driver to take his eyes off the road for a few seconds to adjust anything, which is not ideal. To deactivate the traction control system, you also have to access the menu using the car-shaped icon. Fortunately, the designers kept a few buttons on either side of the screen, for instance to change the audio system's stations or adjust the volume.

Despite this injection of technology, the 2020 Subaru Legacy GT Premier still offers that rigour of assembly inside. You can feel that everything is solid and built to last. The leather seats are comfortable, and there's no lack of space even in the back, while the trunk gives just enough room for the consumer who doesn't want to be bothered with an Outback.

The return of the turbo boxer
The generation change proved fatal for the Legacy’s old flat-6-cylinder naturally aspirated engine, which gives way to the 2.4L turbocharged flat-4-cylinder engine already installed on the big Ascent... and consequently in the Outback XT! Delivering a fully adequate output of 260 hp and 277 lb-ft of torque, the new unit has no trouble making drivers forget about the old 3.6L unit, which, lest we forget, was pretty gluttonous at the pump. However, hardened purists will have to make do with the only available transmission unit, a continuously variable transmission, which, I must admit, does an excellent job in the city, on the highway or even in more playful driving.

Frankly, with this new powertrain, I was able to rediscover a bit of the Legacy GT that was once available in Canada, even though the sound of the engine is now less rustic, and there’s no longer a third pedal. The all-wheel drive system is as competent as ever in more slippery conditions and accelerations are very convincing when the turbo kicks in. Plus, the Legacy GT Premier does exactly what it needs to do, which is to be as comfortable as possible without falling into the monotony of a tasteless mid-size sedan. Even the steering is precise enough to put a smile on the driver's face.

Unfortunately, I have to put apply some darker colours to this rosy picture drawn so far. In all my years of road testing, I've never felt an automatic start-stop system as brutal as the one on this Legacy GT. Never have I experienced a harder hit than when I restarted the flat engine of this car. Is this an isolated case or a generalized feature on all 2020 Legacys? It's still early to tell, but honestly, this side of the sedan as it was in my hands forced me to turn off the system because I found it simply too annoying.

The last word
Despite this inconsistency in the occasional use of this system, I still believe that the Subaru Legacy GT Premier 2020 is a sedan that deserves a better fate, especially in Canada where four-wheel drive vehicles are popular. 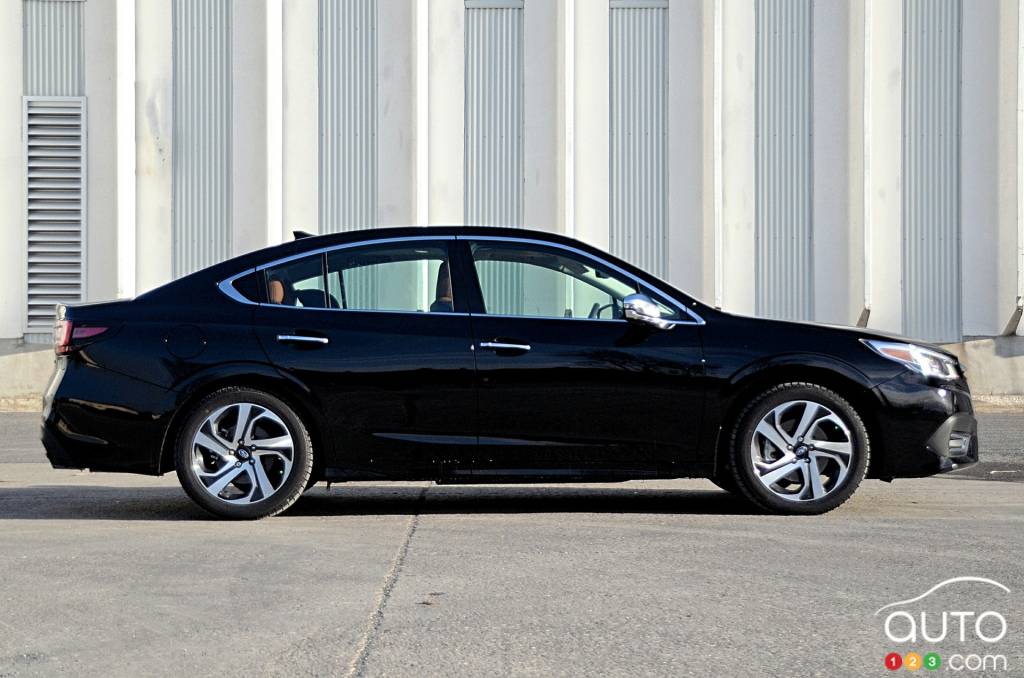 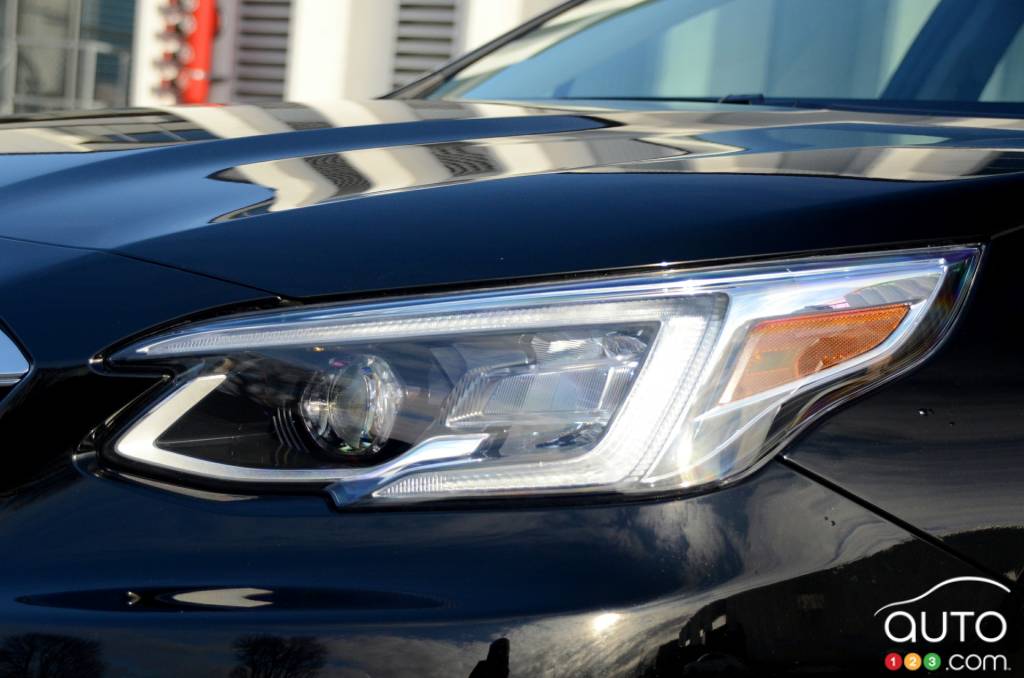 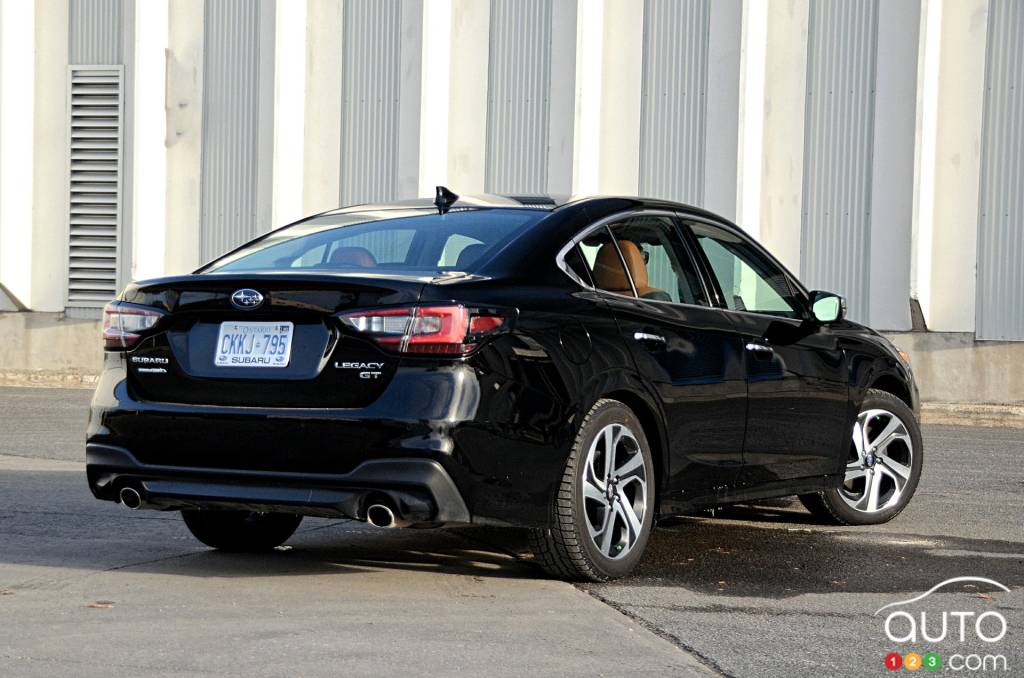 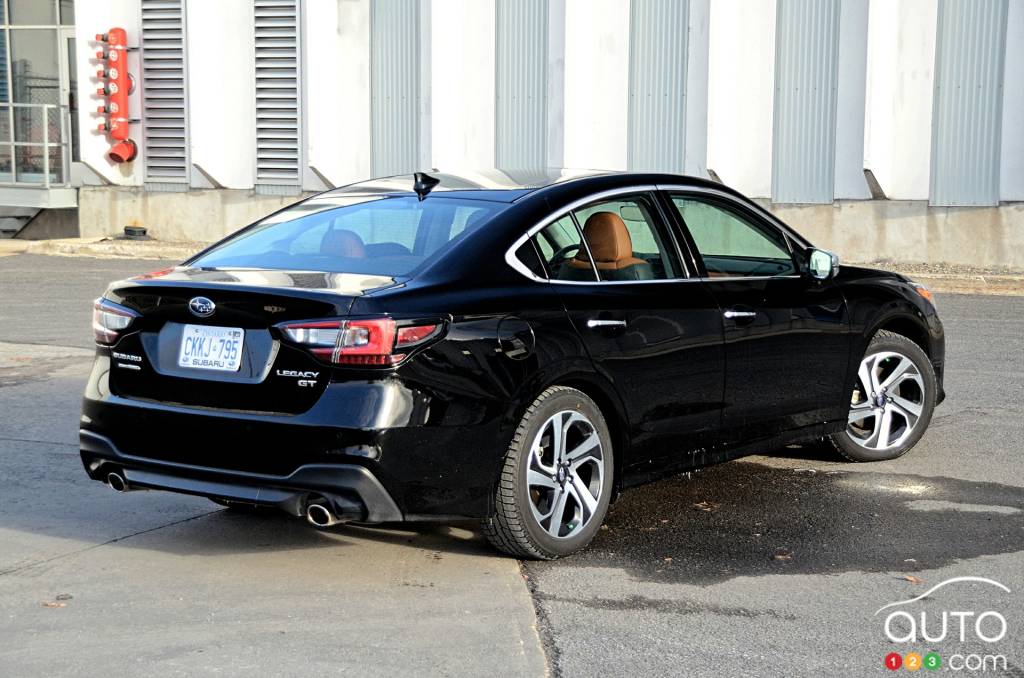 2020 Subaru Legacy First Drive: From the Shadows Into the...

Auto123 got a first taste of the next-generation 2020 Subaru Legacy, a sedan that’s equipped to please, but not to outpace its rivals. While the new model is...